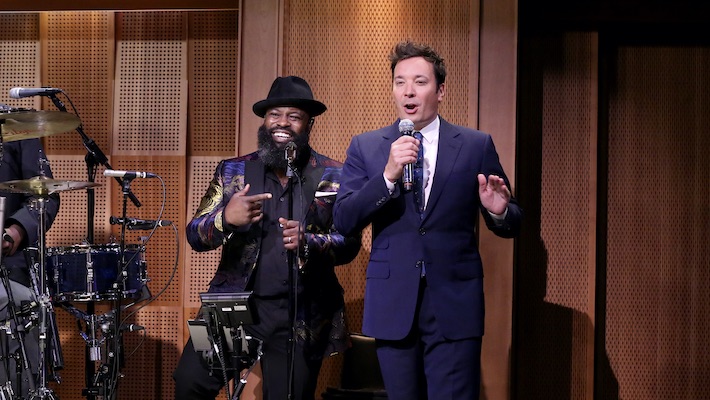 Life during the pandemic has changed a lot of things, and that includes the annual Macy’s Thanksgiving Day Parade. The show went on, though, and it was kicked off by Jimmy Fallon and The Roots.

It started with a pre-taped skit of Fallon making an opulent Thanksgiving dinner in his kitchen and calling for the parade to be saved. So, he texted Questlove to meet him outside, and from there, Fallon and The Roots launched into a spirited rendition of David Bowie and Mick Jagger’s “Dancing In The Street.”

The parade didn’t go how it usually does this year. No crowds were in attendance, and the proceedings took place just in the one-block stretch in front of Macy’s flagship store on 34th Street. Additionally, much of the parade was pre-taped over the course of three days, and while about 8,000 people usually participate, that number was reduced by about 88 percent this year.

The parade’s executive producer Susan Tercero told the Associated Press, “Traditions like this are comforting and they’re uplifting. New York has always been a tough city. It bounces back. It takes its blows and then it continues on. And I think it’s extremely important for us to be that display this holiday season. Regardless of what’s happened, New York needs to be that beacon of light in the darkness and this parade, I think, is symbolic of that.”

Watch clips from the parade above.