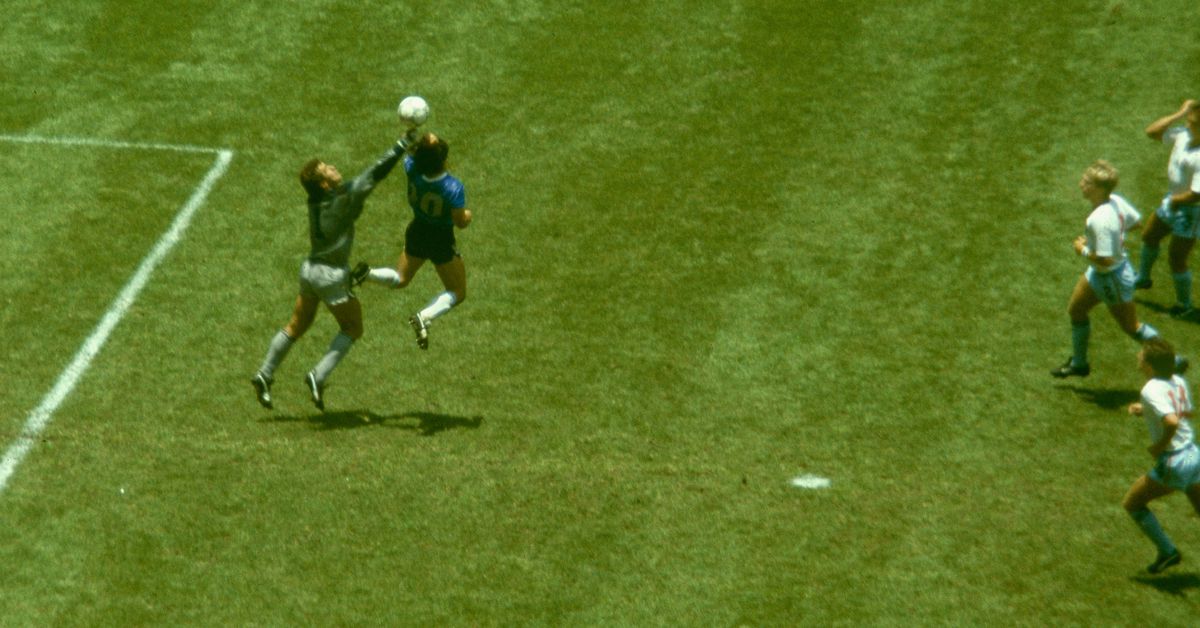 Diego Maradona will be remembered for many things. He was a sublime footballer; ferociously talented, relentlessly driven. But Maradona wasn’t just a footballer. He was a force of nature, a presence who made himself felt, for good or ill, no matter where he was or what he did. It’s appropriate, then, that perhaps the most iconic moment of his career came when he opted to transcend the sport entirely.

Argentina’s quarter-final against England in the 1986 World Cup was absolutely dripping with political malice. The two countries had been at loggerheads four years earlier over the ownership of the Falkland Islands (or the Malvinas, if you’re Argentinian), and although the conflict never got to declared-war status, the lack of declaration somehow failed to prevent hundreds of deaths on both sides.

Almost four years after the contentious Argentinian surrender, diplomatic relations between the countries had yet to be restored. Ill-will remained high. Nostalgia for empire and the ugliest kind of nationalism left England treating Argentina as The Natural Enemy; the pain of a lost and pointless — Borges described it as “a fight between two bald men over a comb” — war meant that the feeling was returned with additional spite. It fell upon Maradona, then 25 and at the peak of his considerable powers, to restore the nation’s honor against the perfidious fiends of Albion.

He scored both goals in a 2-1 win. The second was a thing of genius, a dazzling run through four English tackles and a deft finish:

This goal is Maradona at his absolute best. Everything about it bears his signature. His escape from a tight spot in midfield; his loping gait which somehow conveys ownership of the football while everyone else on the pitch was, at best, a renter; his insistence on rounding Peter Shilton, which I suspect comes at least in part from wanting to prolong England’s discomfort. It’s glorious and beautiful, and deserves its nickname.

The funny thing about the so-called “Goal of the Century”, however, is that it’s not the most iconic goal Maradona scored in this game. Because four minutes earlier, he did this:

This is not, on the face of things, a particularly remarkable goal. Sure, Maradona’s run implodes the whole England midfield, turning Glenn Hoddle into paste and creating the situation in which Steve Hodge hodges what should have been a clearance into the Zone of Pure Chaos. But it’s a scrappy goal, bundled in under pressure from Shilton, and it has nothing, from the purely aesthetic perspective, on the second.

Upon replay, however, it became obvious that the 5′5″ Maradona hadn’t somehow headed the ball past his far taller opponent. He had jammed the ball in with an upraised fist. England protested furiously (and rightly) for handball. The referee ignored them and the goal was allowed to stand.

Sure, it was cheating. And sure, it was pretty brazen. But it’s this brazenness which makes the moment special. Maradona wasn’t just defying Shilton and England with the punch. He was defying the whole sport. Nobody else would have gotten away with it but Maradona, but nobody else would have tried except Maradona. For him, special rules applied. He often looked like he was playing a different game than his sluggish beef-witted opponents; here the cliche became reality.

Maradona was equally brazen when talking about the goal. Basking in the glory of the win, which took Argentina to a semi-final against Belgium, he brushed off a post-match suggestion that the goal was not quite legal, claiming that it was scored “a little with the head of Maradona and a little with the Hand of God.” The casual blasphemy highlights an obvious truth: Maradona was operating in the undefined space between mortal and im-. Years later he’d admit that the Hand of God was the hand of Diego; the difference, however, has never been significant.

This was a man who lived life in reckless disregard for the rules. He appeared to consider that they did not necessarily apply to him, and the world then obliged him by turning a blind eye. Handball, sobriety, not shooting journalists with an air rifle (this actually happened, in 1994), these were all conventions to be flouted whenever he felt like it. Maradona got away with the Hand of God because he was Diego Maradona, and this was part of the Diego Maradona experience.

Winding up the English does have its perks (and I think the Hand of God looms so large in my mind at least in part because I have the misfortune to be an England fan). They are such fun to vex! Shilton, incidentally, never forgave the goal, despite rumors of an apology which Maradona later denied:

I never apologized to anyone. Besides, I don’t have to apologize by making a statement to England. For what? To please who? What pisses me off the most is that they repeat this in Argentina and talk to people who know me. They talk about contradictions. At forty-seven I think that apologizing to the English is stupid.

But the windup isn’t why this goal is so important. The Goal of the Century sums up Diego Maradona the player. It shows him fiendishly cunning, frighteningly strong, the ball held at his feet through bounds of pure, mutual love, the Maradona with the instinctive knowledge of the critical movement at the critical time, the Maradona capable of scything through teams at will. As Arthur C. Clarke might say, any sufficiently talented athlete is indistinguishable from magic; the Goal of the Century is Maradona at his most magical.

The Hand of God, meanwhile, discards that level of footballing genius for something more profound. It gives us Diego Maradona the force of nature, an impossible talent bulldozing his way through both opposition and convention. And while Maradona will absolutely go down as one of the sport’s greatest-ever players, his defiance of convention is both what got him there and enabled him to transcend even that celestial role.

May he rest in peace.