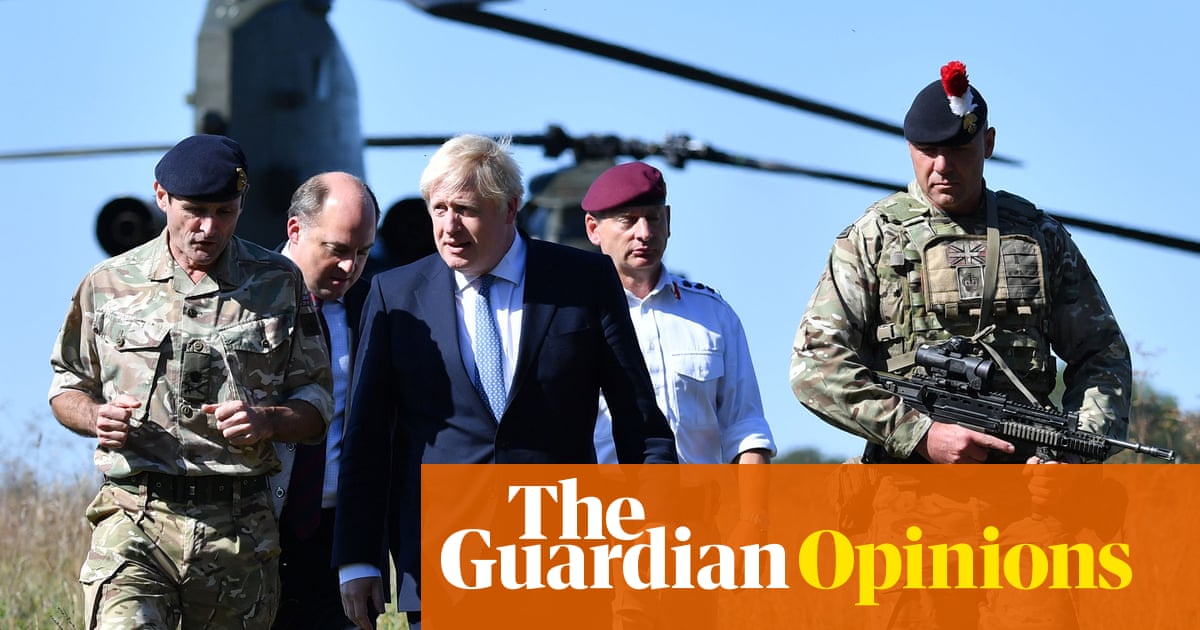 In March, when Boris Johnson announced a national lockdown in response to the coronavirus pandemic, it seemed as though Britain, long a nation obsessed with its imperial past and military history, had shifted its concern to the wellbeing of its citizens. The government had accepted responsibility for the safety of individuals and their families, albeit more slowly than some other European nations.

Yet after all we’ve learned during the pandemic about the dangers posed by a virus smaller than a dust mite, Johnson’s recent announcement of a £16.5bn increase in defence spending over the next four years (over and above a commitment to increase the existing £41.5bn budget by 0.5 percentage points above inflation) signalled a return to business as usual. The new spending is focused on cybersecurity, artificial intelligence and a military space capability. Johnson said that he had taken this decision “in the teeth of the pandemic” because “defence of the realm comes first”.

What does “defence of the realm” really mean? Johnson refers to “our people and our way of life”, yet the dangers we face as a nation aren’t traditional wars: they’re global crises such as pandemics, the climate crisis and rising inequality, as well as security threats associated with terrorism and organised crime. Rather than spending on old-fashioned military defence, the UK’s focus should be on “human security”, a version of security that begins at the level of individuals rather than nation states and considers existential threats of all kinds – from poverty to ill health. In practice, this would mean spending more on climate change action and development assistance, as well as forms of defence spending where the military plays a roll in protecting and assisting citizens both at home and abroad, not fighting wars.

But the government appears more focused on traditional military defence than current global issues. Chancellor Rishi Sunak has announced an enormous reduction in the country’s aid budget from 0.7 to 0.5% of GDP – a move that is devastating for people living in poverty as well as those in conflict zones, and something that could well come back to harm our own security at home. And the prime minister’s recent pledge to spend £12bn on a 10-point green investment plan pales in comparison to Britain’s new defence budget.

The decision to increase defence spending was taken before the integrated review of security, defence, development and foreign policy had completed its work. One probable message of this landmark review, which is expected to be published early next year, is that addressing global challenges so as to ensure the safety of “our people and way of life” goes far beyond military spending. Another likely conclusion is the importance of stabilising and mitigating contemporary conflicts in places such as Syria, Yemen or the Horn of Africa.

These “forever wars”, as they have sometimes been called due to the fact they are extremely difficult to end, are very different from classic conflicts of the past. Not only are they fragmented and decentralised, involving complex networks that engage in both political and criminal violence, but they are both local and global in scope, and closely related to other challenges such as terrorism and organised crime that affect us at home.

The UK does need a capacity to intervene in such conflicts within the framework of the United Nations, with the aim of protecting civilians, delivering humanitarian assistance and diminishing violence. But this is not the same as classic geostrategic military interventions of the kind undertaken by Russia, the US or Turkey, which are destructive and can prolong violence. Interventions in overseas conflicts should be about saving lives, not fighting wars, and ought to involve a variety of skilled workers, such as humanitarian agencies, health workers, human rights monitors and mediators. Development assistance is particularly important when dealing with these conflicts: it funds humanitarian assistance and can help people create livelihoods, providing an alternative to joining armed groups.

These types of intervention might include a role for the police and the military, but only in order to protect civilians, uphold international law and create safe humanitarian spaces (indeed, the Ministry of Defence has established a centre for human security in military operations with this aim). The army can serve as a first reserve of public labour during emergency situations, helping to carry out Covid testing, building emergency hospitals or helping to build flood defences, for example.

Likewise, there’s an argument that spending more on high-tech areas of defence is important to protect people at home and abroad. The UK is vulnerable to criminal cyber-attacks, election interference and even attacks on key infrastructure. But it’s crucial that these cyber capabilities protect privacy and human rights, and are defensive rather than offensive.

The same goes for space. The UK is still a member of the European Space Agency, which has developed capabilities for responding to humanitarian and human security issues – something to which the UK can and should contribute. But developing an independent military space presence in the form of the proposed “RAF space command” isn’t only expensive and difficult, it’s also dangerous: the militarisation of space expands the frontiers on which conflicts can take place.

There is a powerful case for increasing our spending on human security issues, especially in the context of the pandemic. This has to include both climate change action and development assistance. But Johnson’s motivation seems to be more about returning us to an era of gunboat diplomacy than preventing and ending violent conflict. In his words, he wants to end “the era of retreat” and bolster “our global influence”.

This global influence has been hugely diminished by Britain’s departure from the European Union, where the UK played a key role in external security policy. Cutting development spending will further tarnish Britain’s worldwide image. It is difficult to see how a vision for “Global Britain” can be achieved through increased military spending. Indeed, what is needed for keeping “our people and our way of life” safe is greater spending on human security, not on the destructive, anachronistic tools of geopolitics.