Close your eyes and the shape of it should start to come back to you, even if the details are a little hazy after all these years. It was Fabien Galthié’s kick, a chip into New Zealand’s half. And it was Andrew Mehrtens who came running across to cover it, while Taine Randall tracked back from the front. Christophe Dominici started five yards behind, but was gaining all the time. The bounce was loopy and awkward and for a split second everything slowed down while the ball hung in mid-air between the three of them. Then Dominici reached for it and everything sped up again as he pulled it down and raced away again. The knave of hearts had made off with the Queen’s tarts.

Mehrtens, wrong-footed, threw himself after him. But Dominici swerved just enough to slip his grasp. Mehrtens flew past and ended up face down in the grass. Then Dominici was gone, well beyond Randall’s reach by the time he crossed the tryline. It gave France the lead and it turned one of the greatest games. It is a good way to remember Dominici, who died on Tuesday, at the age of 48.

The great tries stay with you. Think hard enough and you can still feel a little of what you did the first time you saw them. There was another at Twickenham just last Saturday, Jonny May’s breakaway, from one end of the field to the other in 15 seconds, a swerve past Chris Farrell, a sprint with Bundee Aki, a chip infield and race against Jamison Gibson-Park to gather it again. It wasn’t just the speed, or the skill, but the wit and impudence of it, the imagination. It was a shame there were so few people there to share it, no swell of noise when he slipped Farrell, no sweep of people getting to their feet as he raced Gibson-Park.

The consensus was that it was the best try an Englishman had scored at Twickenham since Chris Ashton ran one in from his own tryline against Australia in 2010. For me, May’s was better. But Ashton was on the BBC this week, arguing, tongue-in-cheek, that his wins because those Australians were a stronger side than these Irish and that the man he beat, Drew Mitchell, was a better, faster, player than anyone May was up against on Saturday. Well, everyone’s allowed their favourite, according to taste and age. 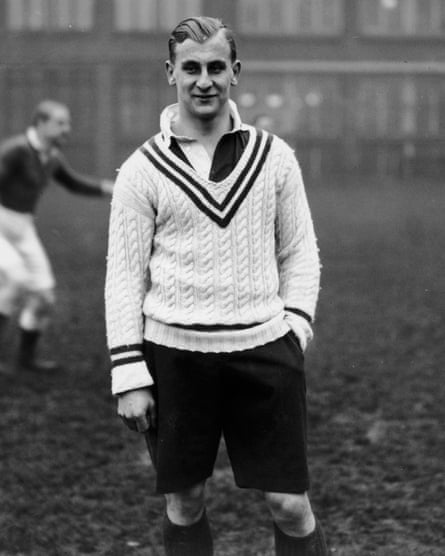 Prince Obolensky scored two superb tries in the first half against the All Blacks at Twickenham in January 1936. Photograph: Hulton Archive/Getty Images

I was looking back at the papers from the day after England beat New Zealand for the first time, at Twickenham in January 1936. They won 13-0 and the game’s best remembered today for the two tries scored by the English wing, Prince Obolensky. The Guardian was so taken with them that they even included a couple of hand-drawn diagrams sketched by their correspondent, full of dots and crosses and jagged lines to show the route he took to the line and the men he beat on the way. “No one else on either side could have scored the try,” he wrote. “Obolenksy alone had the speed, and probably Obolensky alone would have thought of trying to score that way.”

The weekend Obolensky died, The Observer published a poem by Ivor Brown in his honour. “The falcon death has struck him from the air/The fleetest, loveliest runner with the ball/No earthly tackle smothered him, for there/Death he’d outraced, who had outraced them all.”

It’s fun to go back through the Hall of Fame, satisfying to think of all the thousands of spectators at the ground then who felt the very same things we still do now. They talk about the one Peter Jackson scored to win a Test against Australia in ’58, a hand-off, and a double-shuffle one way then the other to beat three tacklers from 20 yards out. Then there is Richard Sharp against Scotland in ’63, three dummies, each more outrageous than the last. Or Andy Hancock, two years later, in ’65, a glorious swerving run from England’s 22 all the way up the left touchline.

For me, it was David Rees. England v New Zealand, 6 December 1997. England had gone six Tests without a win. The All Blacks had won every game they had played that year and were 1-20 to win with the bookies. Rees caught the ball five metres inside England’s half, cupped it in his left hand and set off upfield. Ten strides on he found himself squaring off against Jonah Lomu. Rees, a little man, knew better than to try and go through him. So he dropped the ball, chipped it overhead. Lomu leapt, stretched for it and by the time he had landed Rees had passed him. The ball bounced kindly, up into his gut, and he took it without breaking stride, stepped off his left foot around Zinzan Brooke, then sprinted on again. He started his dive for the line a split second before Frank Bunce caught him from behind. 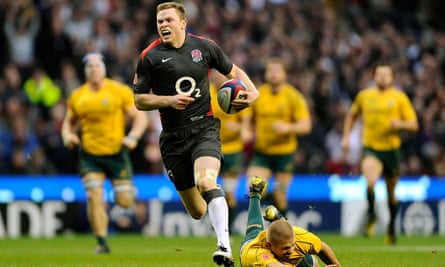 Australia are left trailing by Chris Ashton who scored a memorable try at Twickenham in November 2010. Photograph: Dylan Martinez/Reuters

England ended up drawing the game 26-all. I was 15 and it was the first time I’d been to Twickenham.

After the Ireland game, Eddie Jones took May’s try and turned into a disquisition about transitions, and how his recent conversations with Ian Graham (who is the director of research at Liverpool) have been inspired him to set up a database to better understand the work his players do off the ball. It is Jones’s job as England’s head coach to worry about the how of it. The rest of us are merrily ignorant, happy to be dumbstruck by the show of athletic sorcery.