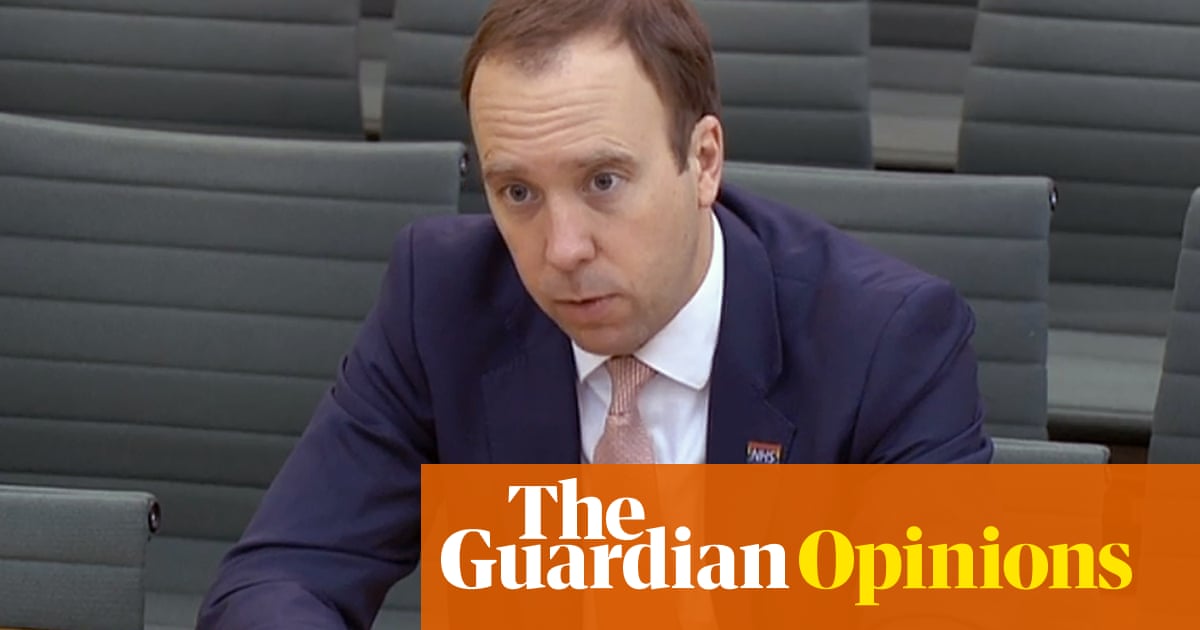 There must be many times when Matt Hancock wonders what he has done in a previous life to deserve his present one. Come to think of it, there are many times when most of us must wonder what we have done in a previous life to deserve Matt Hancock. The health secretary’s life is now one of non-stop misery where he is called upon to explain stuff about the coronavirus that is little more than hope and guesswork on his part. Only on Monday, on what he had imagined was a day off, he was forced to ad lib for Boris Johnson in the commons for 45 minutes when the Downing Street communications nerve centre went mute.

On Tuesday, Hancock was back for a two hour “lessons learned” interrogation . Sadly this wasn’t to be an extended therapy session into the more profound, existential questions into Door Matt’s psyche. So we never found out if Hancock had learned his lesson in hubris, and would never again allow his ambition to exceed his capabilities. Just when the country needed a really able health secretary, we’ve got someone whose enthusiasm and patter would have seen him rise to be the manager of an upmarket car showroom.

Not that Matt isn’t a trier. No one can deny that he means well – even when he’s clearly out of his depth – and that’s what makes him such a figure of pathos. But even Hancock is beginning to fray around the edges. Back in the day, he could be relied on to be a Tigger, full of boundless optimism and energy, but now he’s beginning to look defensive and knackered; torn between not wanting to be thought to have failed and longing for the day when the prime minister moves him sideways into a less stressful job.

So the early exchanges between Jeremy Hunt, chair of the select committee, and Door Matt were decidedly tetchy. After the briefest of acknowledgements that hope was on the distant horizon in the form of three potential vaccines, Hunt asked Hancock if he had always followed the science. “I prefer to say that we were always guided by the science,” Matt said.

“But you did used to say you were following the science,” Hunt observed.

“I was merely being colloquial on those occasions,” Hancock snapped.

Now we were slipping down a semantic rabbit hole. One in which it was unclear if the government was following the science when it got things right and was guided by the science when it screwed up. Or vice versa. Not even Door Matt could quite think his way out of that one, as his answer to whether we locked down too late in March was that we had actually locked down earlier in the curve compared to some European countries.

Which didn’t really answer the questions of why some Asian countries managed the pandemic without a lockdown using a working system of community test, track and trace and why we hadn’t taken the mounting numbers of body bags in Italy as some kind of warning to act sooner. You get the feeling that it is still a complete mystery to Hancock why the UK has the highest mortality count in Europe.

The health secretary also struggled to explain why Sage had described the test-and-trace system, that had already cost £12bn, as having only a marginal effect. The best he could come up with was that Sage must have been talking about one particular, rogue tracer and that it would be wrong for anyone to necessarily believe the statistics that his own department put out.

“One of the lessons we’ve learned is that you must hit the disease hard and hit it early,” Door Matt said forcibly. At which point most people’s jaws dropped, because it was only too obvious this was something both he and the government had failed to do. Rather than accepting Sage’s advice for a two week circuit breaker in September, he had persisted with a three-tiered regional approach that had been proved to be ineffective.

Hancock was soon tying himself in knots: first arguing that a two week circuit breaker would not have been enough, then grumpily insisting that the four week later lockdown was definitely going to work – even if it didn’t and had been introduced too late. By now it was again unclear whether Matt was following the science or being guided by it. Or whether he was following the incompetence or being guided by it.

Like the loyal Tories they are, neither Hunt nor joint committee chair, Greg Clark, were too keen to explore whether one of the lessons learned might be that handing out expensive contracts to friends of friends could be a waste of government money during a pandemic, so this subject was largely avoided. Though Hancock did quite reasonably say that he had no regrets about spending £44K on pizza for staff working round the clock. Just a shame he hadn’t taken the same humane stance on free school meals during holidays.

Conservative Luke Evans was keen to end the session on a high. Surely there must have been some good things we had learned from the whole sorry mess? We had kept the schools open second time round, Door Matt said. Good, everyone nodded. Anything else? “Yes,” yelled Hancock. It was time for Brits to break the habit of soldiering on into work and learn to take more time off. So once the coronavirus pandemic was under control he wanted to keep all the testing centres open so that even someone with a hint of a sniffle could go along and get diagnosed as having a cold and be signed off sick. I’m not sure that’s quite the lesson the NHS hoped to learn from the pandemic.