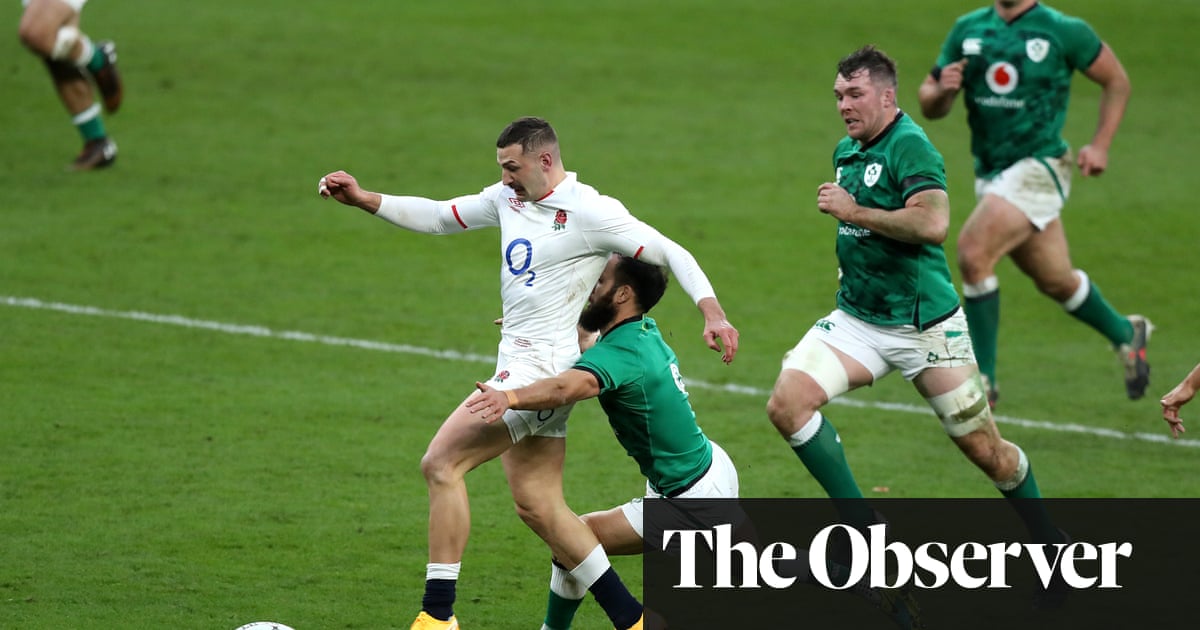 Oh, but Jonny May scored a lovely try, one of the best anyone has seen here in years. It was a full‑tilt sprint from one end of the pitch to the other, the sort you dream about scoring when you’re a little kid with a head full of wild ideas. It had everything except a crowd to cheer it.

And what a shame, because it would have been a tonic for everyone who saw it. It was one of those moments that makes you fall in love with the game all over again. Unless, that is, you were cheering for Ireland. It happened in the 20th minute and all went down so quickly you needed to watch the replays to understand exactly how he pulled it off.

Jonny May runs in rapid double as England see off Ireland

In the quiet of the empty ground, you could hear the England forwards baiting the Irish hooker, Rónan Kelleher, a 22-year-old playing his fifth Test. “Pressure on Kelleher here,” they called as Ireland trooped downfield for a lineout. “Pressure on the throw.”

They were right, Kelleher did make a complete mess of it. The ball flew over the top of Peter O’Mahony. Maro Itoje was the first to it and he passed it on to Ollie Lawrence, who passed to Henry Slade, who passed it on once more to May, the length of the pitch in front of him and an opportunity only he could see.

May took three strides forward, heading towards Chris Farrell’s inside shoulder. Then stepped across and slipped past him on the outside. Space. He stuttered, slipped into a higher gear and stretched away from the man chasing him, Bundee Aki, who dived forlornly towards his trailing ankle.

May’s mind was racing as fast as his feet now. Looking up, he decided the best way ahead was to kick infield. Without breaking stride, he dropped the ball and booted it deep into the Irish half. That put him into a straight race against the Ireland scrum-half, Jamison Gibson-Park, who is quick, but nothing like quick enough. May pulled inexorably away from him as well, then kicked the ball on again with the outside of his left foot, which sent it bobbling behind the tryline. He curved his run around to follow the bounce, grabbed it and touched it down with a metre or so of room left to spare.

Behind him, a half‑dozen Irishmen were left face down in his wake.

May had been on something of a barren run. He had not scored since England’s first match of the year, against France in Paris. Since then he had gone five Tests without bagging another, his longest streak since he went seven without scoring right back at the start of his international career. Here, he got two in five minutes.

The first was a beauty, too, in its way. England had an advantage after an attacking lineout, and Owen Farrell sent a speculative kick cross-field to the far wing. Ireland’s young full-back, Hugo Keenan, got his timing wrong and the ball flew over his fingertips to May, leaping up behind him. Keith Earls could not stop May from sliding over the tryline.

May did stop Earls though, which saved a certain try a little later on in the half. Earls had made a cunning little run of his own, a cut infield past Elliot Daly and the tryline was wide open in front of him. May caught up with him just in time to haul him down a yard short of the line.

They were his 30th and 31st tries for England, which puts him in second place on England’s all-time list, alongside Will Greenwood and Ben Cohen. Soon enough he will overtake them and be out alone as England’s record scorer in the professional era.

He had a sniff of another when he gathered a clearance on the Ireland 22, landed like a cat and shot off again past Earls and O’Mahony, but this time he ran slap-bang into Aki, who flattened him.

Even if he had got it, he would still be a way behind Rory Underwood, mind, whose record of 49 in 85 games grows ever more remarkable with age.