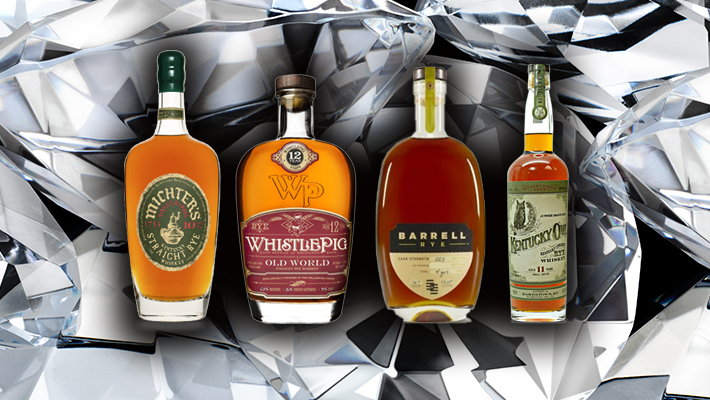 When it comes to cold weather whiskeys, it’s difficult to top a nice bottle of rye. The peppery spice of the spirit makes it an extra warming option this time of year. But spice doesn’t mean unpleasant. A rye mash bill brings the heat, sure, but a premium expression ought to have spent enough time in the barrel to balance that out.

Below, we put together a list of eight expensive ($89 to $250) rye whiskeys that are absolutely worth the splurge. Check them all out below and get ready to thaw the winter cold.

This is one of the most sought-after bottles of rye whiskey on the market. If you can get your hands on a bottle, you’ll be treated to an 8-year-old complex, well-rounded rye. It’s made with a 51% rye mash bill and aged for eight years before being bottled at barrel proof.

The nose is filled with spicy rye grains, sweet caramel, and cinnamon. The first sip is filled with hints of salted caramel, creamy vanilla, and just the right hint of peppery spice. The finish is long, warming, and ends with one final kick of black pepper heat.

If you can find a bottle, pick it up. It’s perfectly suited for slow sipping with a single ice cube or better yet, neat.

Like Willett, this is a beloved and sometimes hard-to-find bottle. This award-winning, small-batch rye whiskey is so full of flavors, it will take multiples glasses to find them all. It’s made in limited-edition quantities and ends up selling for way more than its original MSRP.

Still, if you have the cash, it’s worth it.

The nose is filled with the aromas of cinnamon rolls, sweet clover honey, and vanilla. Up front, you’ll taste hints of sweet clove honey, resinous pine, subtle cinnamon, and floral sweetness. This is followed by charred oak and rich vanilla that all ends in a crescendo of spice.

This spice and sweetness combination works well in an old fashioned but deserves to be enjoyed neat. If you’re paying almost $200 for a bottle, mixing feels like a stretch.

This rye whiskey is so well balanced and nuanced that you might be surprised that it was only aged for two years. If you’re obsessed with maturation and oaky notes, you might find the price tag a bit high. On the other hand, if you believe that whiskey is more about what goes into the barrel than the barrel itself, you’ll enjoy this complex, subtly spicy masterpiece.

The nose is filled with hints of dried fruits, almonds, and peppercorns. The first sip yields flavors of caramelized/burnt sugar, toasted oak, maple sugar, sweet cream, and a nice kick of cinnamon. The finish is medium in length, warming, and ends with a nice hit of cinnamon and caramel.

Even though it was only aged for two years, this pick is nuanced and complex enough to be enjoyed slowly — though you’ll want an ice cube to keep it company.

Over the past few years, Virginia’s Catoctin Creek has slowly gained a cult following (while winning multiple awards) in the whiskey world. Its cask proof Roundstone Rye is 116 proof, but surprisingly smooth. It’s only available twice per year and is made with a supremely spicy 100% rye.

This high proof rye opens up with a nice splash of water. Let it sit for a few moments to bloom, then take a sip. The flavors open beautifully.

This award-winning rye from Kentucky’s Barrell is truly a global spirit. It’s made up of a blend of straight rye whiskeys from Canada, Tennessee, Indiana, and even Poland. Aged between 4 and 14 years, this high-proof whiskey is extremely unique, both in the process to create it and the end product.

And that’s a good thing.

Right off the bat, you’ll smell aromas that are reminiscent of bananas foster, sweet cinnamon, caramel, and pepper. The first sip brings you dried cherries, brown sugar, toasted vanilla beans, and baking spices. The finish is long, warming and ends with a mixture of sweet cream and spicy peppercorns.

If you managed to get your hands on a bottle of this limited-edition whiskey, savor it. Drink it slowly and enjoy every different flavor one at a time.

No rye whiskey list is complete without an expression from WhistlePig. When it comes to expensive rye whiskeys that are worth the price, it’s hard to beat the Vermont-based brand’s Old World 12 Year. It’s a blend of whiskeys finished in a combination of Sauternes, Madeira, and Port casks.

A nosing will bring you aromas of brown sugar, toasted vanilla, and charred oak. This is a mellow, smooth rye whiskey with hints of honey, caramel, dried cherries. The finish is long, full of pleasing heat and ends with a final kick of caramel sweetness that’s more prominent than the final wave of spice.

Find a friend (or family member) to share this bottle with. While it’s so good you will want to keep it for yourself, it’s best to experience these complex flavors with at least one other person — you’ll want to discuss!

Michter’s might be known for its bourbon. But you’re missing out if you don’t give its 10-year-old rye a chance. Aged in fire-charred new American oak barrels for a decade, this limited-edition whiskey is much sought after by collectors and drinkers alike.

While you might be afraid to open this bottle (because you might never get another one), crack it open on the first cold fall night and take it outside. It’s well-suited for slow sipping on a bracing evening.

Redemption is a big name in the world of rye whiskey. It’s 10 year with is bottled at barrel proof. At a whopping 57.4% ABV, this potent, yet smooth whiskey is made from a 95% rye mash bill — guaranteeing the peppery spice that so many rye drinkers appreciate.

Complex and fascinating… and maybe affordable enough that you can try mixing with it?