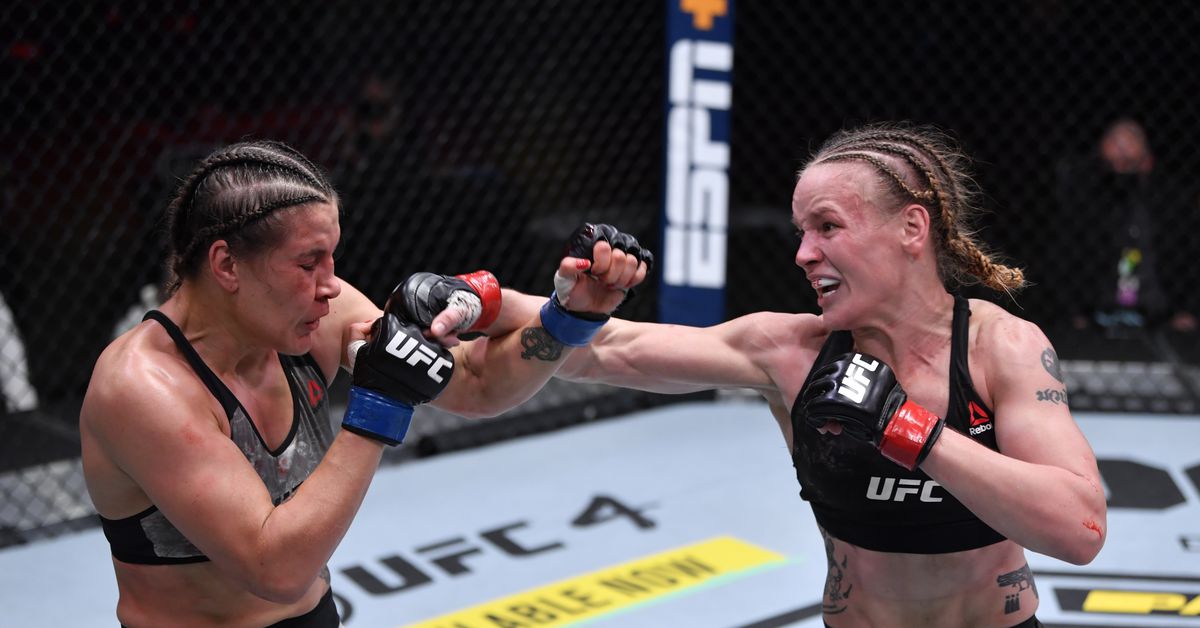 Jennifer Maia had Twitter buzzing when she smothered champ Valentina Shevchenko in the second round of their flyweight title fight on Saturday at UFC 255.

Imagine what Jessica Andrade would do, UFC President Dana White asked after Shevchenko retook control and won the fight.

Maia was a massive underdog to dethrone the champion, reaching as high as +1100 on multiple online betting websites. Shevchenko, who easily won the first round of the fight, never looked back after losing step and secured 49-46 scorecards with all three judges after 25 minutes.

White was asked whether Shevchenko shouldn’t be re-paired with two-division champion Amanda Nunes, who’s beaten her on two occasions and appears to be the only challenge the flyweight champ is far from assured to win. But the UFC executive sees Andrade as a much better option.

“I think Andrade vs. Shevchenko is a very fun fight, and the thing I love about that fight is that Shevchenko’s at a place in her career where she needs an opponent that people think actually has a chance of beating her, and I think we all know that Andrade does,” White said.

Andrade moved up to the flyweight division earlier this year after she lost the belt to current champ Zhang Weili and then lost a split decision against ex-champ Rose Namajunas in a rematch of the fight she won to take the title.

Once a bantamweight, Andrade fought above her natural weight class for her early UFC career. In her first performance at 125 pounds, she stopped one-time title challenger Katlyn Chookagian with a body shot. It’s that power that makes her a threat to everyone, White said.

“If you’re going to go out and be safe against somebody like Jennifer, what are you going to do against Andrade?” the UFC exec asked of Shevchenko. “Andrade is going to bring her a lot of things she’s never seen before, not to mention the power Andrade has.

“She just knocked the No. 2 girl in the world with a body shot. She’s a real problem for Shevchenko that [Shevchenko is] going to have to figure out, and if she does, I think the fight that makes more sense is, Zhang will fight here soon, and after Weili fights, maybe you do those two.”

Weili, the current champ at 115 pounds, is much earlier into her tenure as champion, having defended the belt for the first time against once-dominant titleholder Joanna Jedrzejczyk in a “Fight of the Year” candidate. So far, she has yet to face the criticism that’s followed Shevchenko in fights that were far more tactical than explosive.

Until the championship rounds, Shevchenko vs. Maia plodded at times, with both fighters more eager to clinch and hold position on the ground than scramble or duke it out. Where Maia flipped the script was in her ability to control the champ for five minutes, creating the impression of a more even fight.

Dominant champs often get grief for not earning the finishes of their earlier careers, but White doesn’t agree that Shevchenko played it entirely safe.

“She doesn’t have to do anything,” he said. “Keep doing what you’re doing. You can’t listen to the f*cking fans and the media. You fight your own fight. You fight the way you need to fight. It’s not like she was layed and prayed on somebody for the whole thing. She was picking her apart at the end of that fight.

“I’m assuming from all the fights I’ve seen that Maia’s nose was broken. It looked like a bad road; her nose was going a bunch of different directions. When you dominate somebody the way she did, you don’t have to listen to anybody else. Just keep doing what you’re doing.”

If anything, Shevchenko proved that she could engage fans just with a slight slip. Live betting odds that had her as the favorite plummeted after that second round. One better had reportedly wagered $12,000 on Shevchenko to win a mere $600.