When he wasn’t chasing stories, Elyas Dayee loved tending to his flowers, cooking with his wife and playing with his toddler daughter, the only survivor of triplets, now bereft that her father has stopped coming home, and too young to understand why.

Last week, the 34-year-old became the latest Afghan killed in a nationwide campaign of targeted killings, when a bomb twisted his car into a lethal pile of metal and glass as he drove to work in Lashkar Gah, the capital of Helmand province.

Around the country, journalists, human rights workers, moderate religious scholars and civil society activists have been picked off as they go about their daily lives, often blown up in their cars.

The UN and Afghanistan’s independent human rights commission have both documented sharp rises in these kind of attacks compared with 2019.

The steady drum beat of killings has cast a shadow of fear across the country, even as the government and Taliban are meant to be hammering out a peace deal, hundreds of miles away in Qatar.

Many people see a connection between the two, even though the attacks have not all been claimed by the insurgents.

“Even if we only assume the Taliban are responsible for part of them, the message is clear: ‘Be prepared for our rule, be prepared to surrender, we are coming back’,” said Orzala Ashraf Nemat, the director of the Kabul-based thinktank AREU.

“It is to discourage the united struggle for democratic values, freedom of speech, education, even the enlightening side of religious scholarship. They are trying to do these attacks to create fear because their rule is fear-based.”

Dayee’s death on 12 November was typical of ambiguity around many deaths. A Taliban spokesmen, Qari Yusuf Ahmadi, distanced the group from the killing, but a local Taliban source claimed the car bomb as an “achievement” on social media and tweeted threats to other journalists. 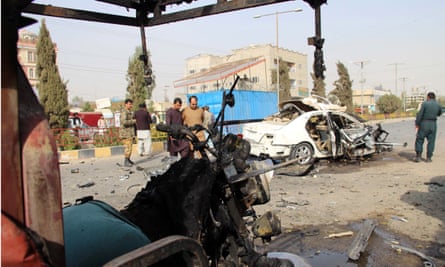 Afghan security officials inspect the scene of the explosion that killed Elyas Dayee in Lashkar Gah, the provincial capital of Helmand, on 12 November. Photograph: Watan Yar/EPA

A self-made man, who moved from the countryside to the provincial capital in search of an education and a career, Dayee ended up working with local and international media, ensuring news from one of Afghanistan’s most dangerous corners reached a wider world.

“He is an irreplaceable figure,” said Jawad Dawari, another Helmand journalist, one of many who paid tribute to Dayee’s sense of fun and community.

Like most reporters in Helmand, Dayee was used to Taliban threats that arrived by phone, on WhatsApp and Twitter, but shrugged them off to carry on working.

After his murder, others are wondering if they could be next, and some have left the province while they consider their own safety, making his family’s personal tragedy also a professional disaster for the media in Helmand.

The killings across the country are having a similar effect elsewhere. Many of the victims, who range from a young human rights worker to a central bank adviser, were not particularly prominent nationally, nor were they known for a particularly outspoken anti-Taliban stance.

Their deaths have left a pall of uncertainty across swathes of Afghan society, with thousands of people questioning if they could be targets because they work in professions or in conditions – including mixed-gender offices – that the Taliban want to curtail or abolish should they regain power in Kabul.

“It feels quite random, in terms of who gets killed, but not random in terms of the types of people who get killed. They are targeting what I’d call public intellectuals, researchers, activists, journalists, people working for NGOs,” said Kate Clark, the co-director of the Afghanistan Analysts Network.

“They are definitely rivals [to the Taliban], not in terms of power, but in ideas and ways of looking at the world.”

“For the Taliban it’s important to try to turn the clock back,” he says, but the bloody social messages also have a military purpose. “The other aspect is the message that ‘we can strike at anyone we want, anywhere’. Your government cannot protect you.”

The US says the Taliban committed to reducing attacks under the terms of a troop withdrawal signed in February. Although violence nationwide has actually increased overall since then, there has been a fall in large-scale violence in urban areas compared with previous years.

Targeted assassinations are unlikely to draw US reprisals, or register much in the news beyond Afghanistan’s borders, but they have a powerful demoralising effect in Afghan cities, spreading a sense of insecurity.

Fear caused by the deaths has been exacerbated by failure to investigate the murders. The family of Yama Siawash, a central bank adviser and former TV presenter, killed five days before Dayee in another car bomb, have issued an open letter threatening legal action if the government doesn’t do more to track the people who killed him.

“One of the concerns for people at risk is the lack of government investigations into the killings. If you feel someone is seriously investigating who did it, on whose orders, then you can say I trust the system, it will try to protect me. When that is not happening it is hard,” Nemat said

Shaharzad Akbar, the head of the Afghan Independent Human Rights Commission, has called on the Taliban to speak out against the killings, and the government to take stronger steps to investigate them.

“The Taliban in Doha should go beyond denying involvement, they should have a very clear instruction to all their fighters about not attacking civilians and the Afghan government should do more to investigate and arrest and hold accountable those who are behind these targeted killings.”