When the going gets tough, Suzanne and Tom get into the garden. “In the times where we’ve not had much money, or there’ve been difficulties with work or jobs changing, we’ve gardened,” Suzanne says. “It’s a good way of releasing tension, of working together, planning and being creative.” Tom nods: “Gardening allowed us to be together, to be able to share that tense period together in a joint physical activity.”

It was a joint physical activity that brought them together initially. The Brisbane couple met at a Townsville tennis club in October 1986. Suzanne wasn’t quite sure what to make of Tom with his turquoise blue tennis shorts and matching white, turquoise and purple striped tennis top but Tom was “blown away” by her.

He’d been invited to the tennis club by a friend, who planned to set him up with someone else. He’d come out of an unhappy first marriage and he was determined to take a more considered approach to finding a new partner. Top of his list of criteria was someone smarter than him.

Enter Suzanne. “You don’t need to listen to someone long to … make a diagnosis of their level of verbal intellect,” he says. With Suzanne it was “that initial impression of ‘Wow, this is one clever lady,’ and ‘that meets my first criteria’”. This “very quickly … blossomed” into Tom being “smitten”. 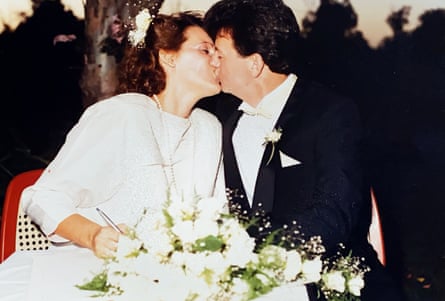 They played a few more rounds of tennis over the next fortnight, and Tom asked her out to see the movie Room with a View. Things escalated quickly from there. They spent the next week having “pretty intense conversations and very late nights”. Both were ready to settle down, and knew what they wanted from a partnership. Suzanne says: “On the Friday night, we continued this conversation, and Tom started talking about getting married, and I said, ‘What are you trying to say?’, and he said, ‘Will you marry me?’” On the following Monday, Tom presented her with an engagement ring when they were out at dinner.

This expedited romance had just one delay – Tom had to wrap up his divorce paperwork. Once the order came through, the pair wed – just over four months since they’d first met. It would have been quicker if they hadn’t had to finalise Tom’s divorce, they say. “We wouldn’t have waited, there was no point,” Tom says.

Their bond was based on their ability to communicate well – something that has stood them in good stead over the years. Suzanne remembers asking herself: “Could I communicate with this person? Were they able to discuss difficult issues? Were they prepared to go through those difficult issues? And how did they make decisions? … How that transpires between people was really important to me.” Tom felt the same way, he wanted someone “you could problem solve together with”. 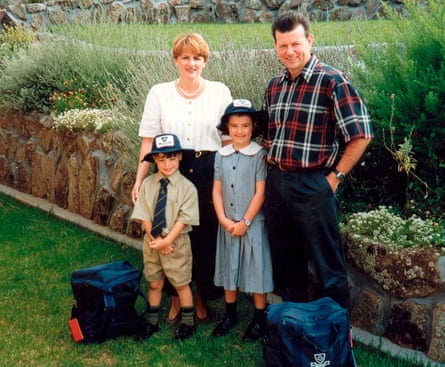 ‘I tend to want to jump in a bit and Tom will take a more considered approach,’ Suzanne says. ‘But that works well, because it makes me hold off and look at the rational part of putting things together and making a decision.’ Photograph: Suzanne Harris and Tom McAtee

They are quite different in some of their views – for instance they never talk about politics and religion, although they respect the other’s right to hold their own opinions. And they don’t always agree on how to spend money, even though their foundations are the same. “We have both come out of working class families where they were going to struggle to put food on the table each week. So we’re both very mindful of the value of money,” Tom says.

However they compliment each other in the way they make decisions: “I tend to want to jump in a bit and Tom will take a more considered approach,” Suzanne says. “But that works well, because it makes me hold off and look at the rational part of putting things together.”

The pair keep a tight ship at home. “We often say, we’re glad we found each other, because no one else could live with the other,” laughs Tom. They are both very organised and tidy: “We’re not OCD. We’re not that far down the spectrum but we’re both very focused on things have a place and things [should be] in their place.”

The couple have two children, both now in their twenties. However the pregnancies took a toll on Suzanne, who had issues with her back. “A lot of those early years were centred around pain when the kids were born,” she says.

It meant Tom had to step up – happily so. Suzanne knew she could rely on him: “Tom was a very hands-on parent. If I had to get up in the middle of the night to breastfeed, well Tom was going to wake up too. Just because he was going to work doesn’t mean … he wasn’t going to wake up. So he would get up and he would help and be there.”

Throughout their marriage, they’ve always shared the domestic load. Often it has come down to who had the more demanding job: “Sometimes our roles are centred around who’s earned the most,” Suzanne says. “If you’re earning a lot and you’re working really long hours, well [we’d ask], ‘What can we do to support each other?’” 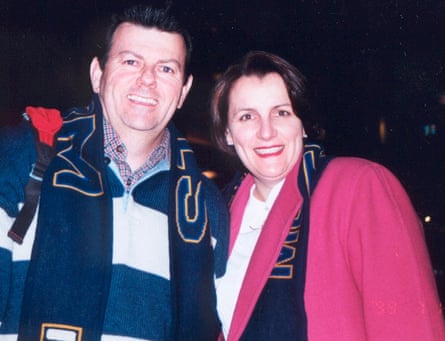 ‘If I was going to hitch my wagon up, then I wanted someone with me going forward, not only that I can love and cherish, but you could problem solve together with them,’ Tom says. Photograph: Suzanne Harris and Tom McAtee

Five years after their second child was born, Suzanne had to have significant spinal surgery. Tom became her carer during her rehabilitation. “I had to nurse her and help her shower, and toilet, and bathe, and things like that. So your sexual partner’s gone. And you just accept, for that period, whatever the time period is, that your role now is not as a lover, but as a carer. And when you’re in that role, you live the role with integrity.”

Years later, Tom also needed back surgery so the roles were reversed. “Suzanne was able to take the lead in that story, while I’m a bloody quivering mess in the corner. And [she went], ‘It’’s all done. You’re booked. You’re organised. We’re getting on with it.’”

There have been many highs during their marriage but they’ve also had to deal with some tough health issues. Suzanne suffered from severe depression when the couple relocated to London for a period. “I never, ever want to go back there again, it was a really difficult time, [but] we had support, we had people around us, and we had good healthcare over there.”

It was during that time that Tom got some valuable advice. One day Suzanne’s therapist pulled him aside: “He said, ‘It’s amazing how often in these situations, the carer ends up getting ill as well. In my experience, the thing that stops the carer getting ill is your being willing to buy help’. So he said, ‘You’re in a good paying job. Go and buy some domestic help, some garden help. It’s the impact of activities of daily life. Go and buy support.’” It’s advice he’d pass on, adding: “[If you can’t afford it] find it somehow. Beg, borrow it off friends. Get help.”

When they were back in Queensland, Suzanne got breast cancer, she underwent a double mastectomy but during the reconstruction process, got a serious infection. It meant the family had to move from rural Queensland to Brisbane. Tom had to change jobs and their son, who was in year 11, had to switch schools. It was a difficult time for the family, but their pragmatic approach got them through it – looking at the bare unvarnished facts of the matter, figuring out what to do and then having the conviction that they’d get through it.

“Sometimes there are difficult decisions that you make that either of us might have opposing views on, but we’ve always been able to sit down [and talk],” Suzanne says. “You might squiggle and squirm in your seat because you’re really don’t like talking about these sorts of things, but you just put one foot in front of the other and do it.” It’s about finding a solution both can feel comfortable with. “It’s being able to have that discussion, and we’ve always done that.” 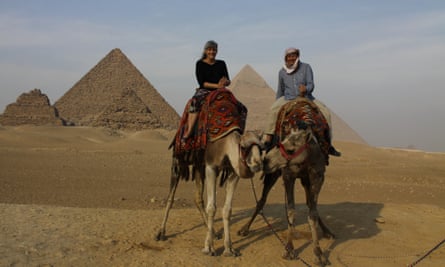 ‘Sometimes there are difficult decisions that you make that either of us might have opposing views on, but we’ve always been able to sit down [and talk],’ Suzanne says. Photograph: Suzanne Harris and Tom McAtee

The couple have also learnt to leave the past behind them. “Shit happens, you just can’t stop because something horrible has happened,” Suzanne says. “It’s absolutely pointless … Worrying is the worst energy waster. You just got to move forward and you need to find the good in things.”

They aren’t frightened of taking a leap into the unknown either – something they’ve done countless times when they’ve moved across the country or the world: “Not to take a leap of faith or to take a risk because you’re worried about what could happen closes down so many opportunities for you,” Suzanne says. “We’re good at taking opportunities.”

Finally it doesn’t help to be precious about things, Tom says. He rails against gender stereotypes and how damaging they can be to a relationship. “It’s so easy to get sucked into these structures and structure drives behaviour … [People] they allow themselves to be driven by these structures that say, ‘I must behave this way or this way’. I go, ‘No, you don’t. You just got to communicate with your partner. What works for you guys.’ There is no magic panacea. There is no magic cookbook of relationships. It’s about what works for you and you’ll only find that out by talking to each other.”