A police force is investigating the conduct of its officers after a woman was left with life-changing injuries after she was mauled by a police dog at an illegal rave on the outskirts of Bristol.

Jessica Mae Andrew, 28, was dancing at a party in Yate at a disused warehouse when she was suddenly attacked, allegedly without warning, as police sought to shut down the event during which hundreds flouted coronavirus restrictions.

She was hospitalised with serious injuries to her leg and foot, including a fractured bone. She required skin and muscle grafts, along with reconstructive surgery. “I know partying is not the thing to do during a pandemic but it was beautiful until the dog attacked me,” Andrew told the Guardian.

Police attended the rave on 31 October at about 10.30pm and formed a cordon to prevent more attendees joining before they cleared the event, seized the generator and arrested eight people. The rave reportedly lasted almost 24 hours and attracted several hundred people.

“The officers opened their wall of shields up slightly and the next minute the dog was mauling the top of my leg,” Andrew said. “My leg is totally a different shape now as it pulled so much fat from the top.”

As a result of her injuries, she has had to leave her home on a boat as she is unable to access it and she will begin physiotherapy next week ahead of liposuction and plastic surgery. She intends to take legal action against the police.

“I’ve been totally traumatised and shaken up,” she said. “But whatever doesn’t kill you will make you stronger. I’m a tough person; it’s brought all the people in my life so much closer and though it’s hard times right now but I will eventually wear my scars with pride.” 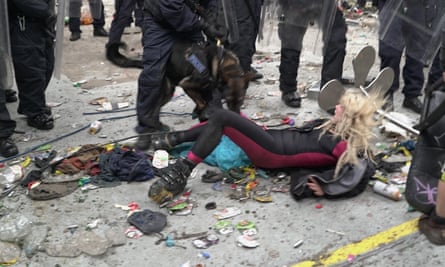 Jessica Mae Andrew was hospitalised with serious injuries to her leg and foot, including a fractured bone. Illustration: Wil Crisp – Karla Hunter/The Guardian

She added: “When you go to a party the last thing you think will happen is that the police will attack you. Hopefully this happened to me, so I can stand up for myself and make sure it doesn’t happen to anyone else again.”

An Avon and Somerset police spokesperson said: “We referred a dog bite incident involving a member of the public that occurred in Yate on Sunday 1 November to the Independent Office for Police Conduct (IOPC).

“The IOPC adjudged the matter was suitable to be investigated locally by Avon and Somerset police. That process is ongoing and will include reviewing body-worn footage. Our final report will be provided to the IOPC.”

The force declined to comment on whether the dog was under control and whether police officers failed to warn Andrew before the dog attacked her. “We’re investigating and therefore don’t think it is appropriate to comment further while that process is ongoing,” it said.

Speaking after the event, the Avon and Somerset chief constable, Andy Marsh, said officers had faced “really significant violence” and had bottles and fireworks launched at them, as well as punches and kicks, although no officers were reported to have been seriously injured.

On a Facebook Live video, he said: “We attended the unlicensed music event in Yate within 12 minutes of being called. There were already 250 to 300 people there.

“We have many hours of body-worn video footage of the violence, threats and intimidation used towards police officers. There were missiles thrown, bottles, punches, kicks, fireworks fired at officers. All sorts of really significant violence.”

He added: “Anyone who used violence towards police officers, wherever they come from, we will hunt them down, arrest them and bring them to justice.”

Two organisers of the event were given £10,000 fines, he said. The police and crime commissioner, Sue Mountstevens, criticised the “despicable” behaviour of the partygoers, saying they risked spreading the virus to their families.

She said: “It was absolutely despicable behaviour. If you’re young you may think you’re invincible – we know you’re not. They’ve possibly taken the infection back to their parents and grandparents.”

“There appears to be no justification at all for the dog in this case either being instructed or allowed to bite Jess, compounded by the lack of care and control displayed by the police handler who allowed his dog to maintain its attack on Jess for so long,” he told the Independent, which first reported the news. “My client has effectively been maimed for life, for attending a dance party.”

It comes amid growing concern over significant increases in instances of police officers deploying force on members of the public. The figure was 12.5% higher at the peak of lockdown than in the previous three months despite crime rates falling significantly.

The National Police Chiefs’ Council has said the rise was due to greater proactive policing against known criminals. However, campaigners have claimed some police forces used the pandemic as an opportunity “to selectively reassert an aggressive, command-and-control style of policing”.