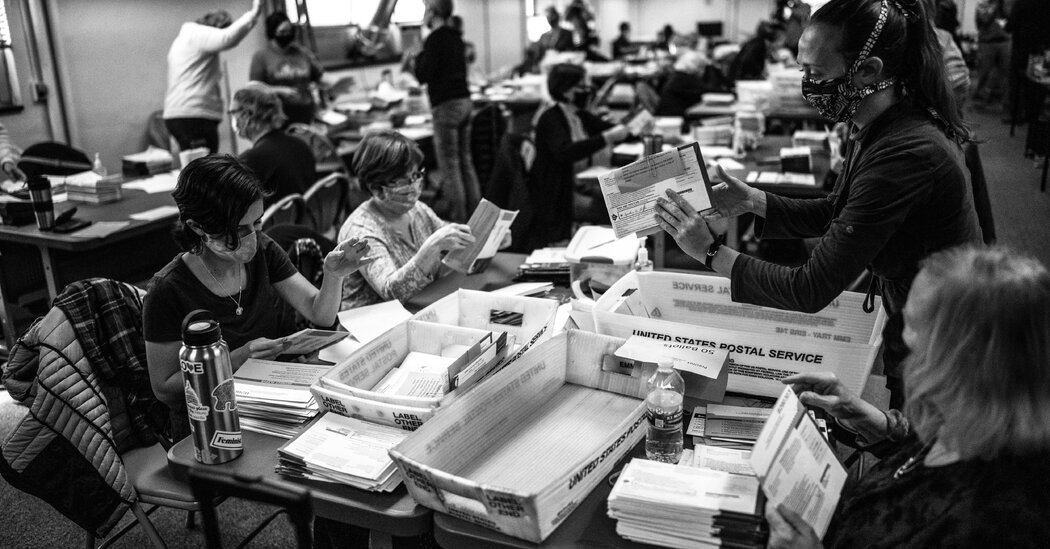 The country is coming to a crossroad on Monday. That’s the date Michigan is to certify the results of the 2020 election. Yet President Trump has chosen a state he lost by more than 150,000 votes — more than 14 times the size of his 2016 victory in Michigan — to try to subvert the election.

Having failed in the courts, President Trump is now grasping at a new lifeline: pressuring Republican election officials and legislators to ignore the reality that Joe Biden legitimately won the popular vote in their states. This tactic, now being played out in Michigan, is no doubt sending the anxiety levels of Biden supporters back to where they were before the courts had calmed these efforts by exposing how empty most of the legal claims were.

But this tactic, too, is destined to fail — though it is toxic for the country’s politics.

Michigan has an unusual system for certifying vote totals. In many states, a single actor, the governor or secretary of state, has the final authority to certify the winner of an election. But Michigan employs four-member canvassing boards, first at the county level — which is now complete — and then at the statewide level. These boards, including the statewide canvassing board that meets Monday, include two Democrats and two Republicans. The governor appoints them, with the Senate’s consent. This structure was designed to provide checks against partisan manipulation of the certification process. But the president is hoping to get the two Republicans on the board to refuse to certify, thus blocking certification.

Because the president almost succeeded in getting the two Republicans on the Wayne County board to do that, many wonder whether he might manage to get the Republican members of the state canvassing board to refuse to certify. But even if they turn out to be so unethical as to refuse to acknowledge the fact that Mr. Biden legitimately won Michigan, the tactic is not going to work.

The Biden campaign and Michigan voters would likely first turn to the state or federal courts. A court would likely issue an order to the state board to certify the result — legally, this is known as issuing a writ of mandamus — because the board’s legal duty is clear and unequivocal once it has received the certified vote totals from the counties. If the resistant board members were still willing to defy the court and go to jail (presidential pardons do not apply to state crimes), a court could also issue the certification itself.

Michigan’s governor also has legal powers she could invoke, though whether she would choose to do so would involve complex political judgments. Under the state’s constitution, she has the power — the constitution, actually, calls it a duty — to remove or suspend from office a canvassing board member for “gross neglect of duty,” “corrupt conduct” or “for any other misfeasance or malfeasance” in carrying out their duties. Failing to certify on the facts in Michigan would easily meet this standard.

The Trump campaign team is pursuing whatever avenues they imagine might conceivably block certification, in Michigan and elsewhere, including calling up Republican canvassing officials and inviting Republican legislative leaders from Michigan to the White House for “discussions.” That’s because once states certify, Mr. Biden is the legal winner. Not only is getting a court to overturn the legal result of an election extremely difficult, but the Biden electors would be officially appointed and it would be much harder for the General Services Administration not to make the relevant finding that unlocks the transition process.

One of the many tragedies of what has gone on since the election is that we should be celebrating our achievement at having smoothly managed to conduct an exceptionally high turnout election under the most difficult circumstances. Think of the list of concerns we had in advance of the election: foreign interference; inability to staff polling places; huge lines on Election Day; excessive challenges at the polls or even violent confrontations; high rejection rates of absentee ballots; large numbers of absentees arriving too late to be counted; long delays in mail delivery that compromised the outcome.

That’s a partial list. None became significant issues, though election reforms are still needed. We also worried about partisan election administration, because the chief election officer in most states, the secretary of state, is typically a partisan elected official. Yet secretaries of states from both parties have not just performed in a completely professional manner, they have done so heroically against political pressures and personal threats.

Yet the country, mired in baseless accusations of fraud, cannot even see this achievement, let alone celebrate it. Even those who voted for Mr. Biden are too consumed with anxiety about getting safely to Jan. 20 to celebrate the country’s triumph in how well the election was run.

President Trump will undoubtedly continue to try any tactic to fend off the reality that he lost the election. But even if he manages to corrupt a few partisan actors, it will not change the outcome. The election survived the stress test we faced. The postelection process will as well.

The real danger is that the country will become increasingly ungovernable.

Richard H. Pildes is a professor at New York University’s School of Law and an author of the casebook “The Law of Democracy: Legal Structure of the Political Process.”