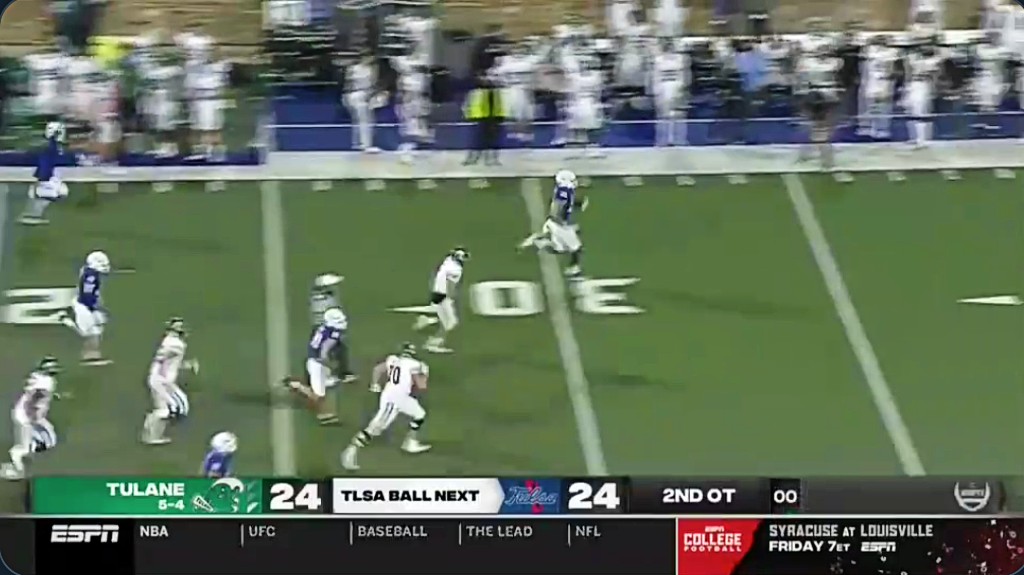 Tulsa and Tulane occupied the lone college football slot on the Thursday night schedule this week and for the first 58 or so minutes, it was a relatively sluggish game. Tulsa entered their final drive of the game playing third-string QB Davis Brin down 21-14 and in need of a miracle.

With six seconds to play on the Tulane 37, the Golden Hurricane drew up a Hail Mary to JuanCarlos Santana in the back right of the end zone and, somehow, Tulane’s defense let Santana get behind them for the game-tying touchdown.

Tulsa would kick the extra point to force overtime, and in the first overtime period the two teams traded field goals to make it 24-24. At this point, those that bet the Under on a total of 55 were bracing for a disastrous loss, while the cover also hung in the balance at Tulsa -5.5. Tulane got the ball first and while facing third and goal from the Tulsa 3, managed to throw an interception to Zaven Collins, who motored 97 yards the other way for a game-winning pick-six to cover for Tulsa and, miraculously, preserve the Under.

It has to be up there with the wild Western Michigan-Toledo finish for craziest ending to a game this year, as the Broncos beat the Rockets on an onside kick and a fake spike. I’m not sure the Golden Hurricane’s finish is quite as spectacular but it’s damn close, and they remain undefeated in the AAC.