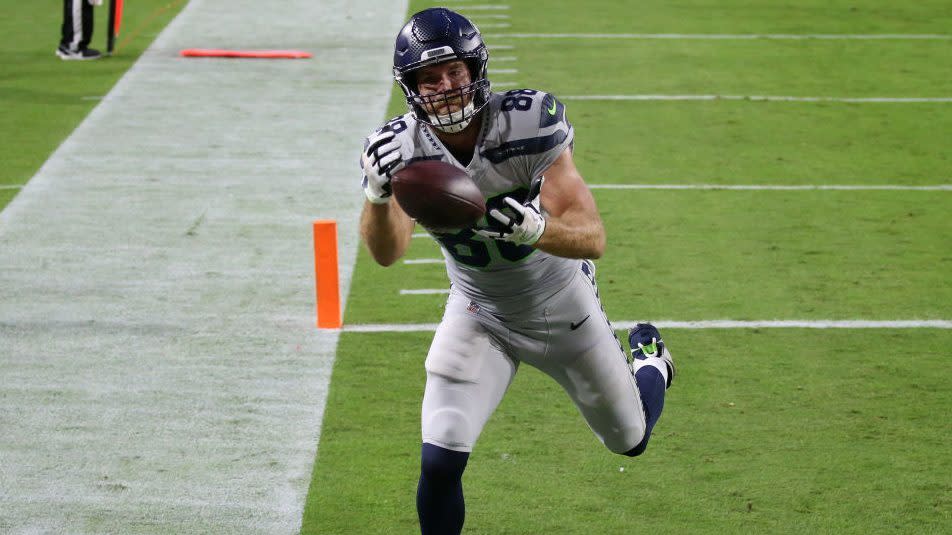 “It’s a little early but he has a fascia tear injury that he’s had before in his other foot,” Carroll said. “He knows exactly what it is and sometimes when it ruptures like it did, we think it’s the best thing for a quick recovery. So we’ll see what happens and wish him the best and hopefully he can make it back. The fact that he’s already had this before really helps him understand what’s coming up.”

Olsen tore the fascia in his right foot during the 2018 season with the Carolina Panthers. The injury to his right foot came in early December of that season and he was placed on injured reserve and did not return before the end of the season.

Olsen was set to block in front of a wide receiver screen to D.K. Metcalf when he collapsed onto the ground. Olsen required the assistance of trainers to get to the sideline and he would board a cart to leave the field after getting an evaluation in the sideline medical tent.

Carroll didn’t rule out a chance for Olsen to return this season but said it’s still too early to know the timeline of what his recovery might be.

“There’s been some marvelous returns for guys who do rupture their fascia that would blow you away,” he said. “Right now he’s in really a lot of discomfort and all that but we’ll see what happens. I can’t tell you more. That’s why it’s pretty early to be talking about, obviously.”

Olsen caught two passes for 20 yards against the Cardinals before exiting the ball game. For the season, Olsen has 23 catches for 224 yards and a touchdown in his first season with the Seahawks.