For many of us, Covid-19 restrictions and lockdown have meant spending a lot more time at home. For Robbie Power, though, it has been the exact opposite. On a Tuesday evening in early October, he drove away from his home in Ireland and onto a ferry for England, not entirely certain as he did so when he would be able to move back.

“It was a tough decision,” Power, the main jockey for Colin Tizzard’s stable, said this week. “I’ve my wife and two-year-old daughter at home, and it was very difficult leaving my house to drive to the boat on my own, leaving them behind. But it was a decision I was forced into because of the Covid restrictions, because the Tizzards have such a strong team of horses over here.

“For so long, I had the best of both worlds, I was flying back and forward and had good rides in Ireland for Jessie Harrington and the Tizzards over here. Unfortunately, something had to give because of the Covid situation and I felt that the best opportunities for me were in England.”

Power is allowed to return to Ireland to ride in Grade One races without being required to quarantine, but as he points out, “this side of Christmas, those are few and far between”. And so family time for the Powers seems likely to be mostly restricted to daily FaceTime calls at least until the spring.

“Modern technology makes these things a lot easier,” Power says. “Hannah FaceTimes me every evening with Emma, and we’ll chat away for a few minutes. Emma’s only two so she gets bored after a few minutes, but it’s great to see her and hear from her.”

Horses like Lostintranslation make it easier too. Power’s partner in the Betfair Chase at Haydock Park on Saturday afternoon, the first Grade One of the jumps season, finished a close third in last season’s Gold Cup at Cheltenham and is likely to set off as the favourite to repeat his success in the same race 12 months ago.

“The likes of Lostintranslation and The Big Breakaway [a winner at Cheltenham last weekend], they were two of the main cogs in the wheel of me moving over,” Power says. 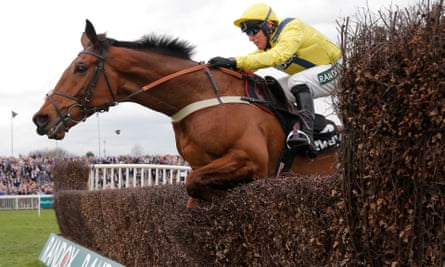 “He didn’t have an ideal preparation before the Gold Cup, and the Tizzard team just weren’t flying at Cheltenham, for whatever reason. Coming down to the second last, I thought that a bad week was going to get very, very good and it nearly did, he travelled like the best horse in the race and that lack of an ideal preparation probably caught up with him in the last 200 yards.

“But we know he handles Cheltenham and we know gets the trip, so all roads lead back to Cheltenham in March, please God.”

In addition to a wealth of options at the Tizzard stable, Power has also become the jockey of choice for several big Irish yards when they send runners to Britain. Gordon Elliott and Emmet Mullins both supplied him with winners at Cheltenham last weekend and it is a pattern he hopes will continue.

“There’s upsides and downsides to everything,” he says, “and the plus for me is that other Irish jockeys don’t want to isolate for 14 days when they go home and so Irish trainers are using me. Gordon, Emmet, Jessie and Paul Nolan all used me at Cheltenham, and Colm Murphy is going to use me on Saturday [aboard Relegate] in the big handicap hurdle at Haydock. I’m a familiar face in a different country.”

“It’s all up in the air at the moment, nobody knows what’s going to happen next, but now I’m here and I’ll make the best of it.”