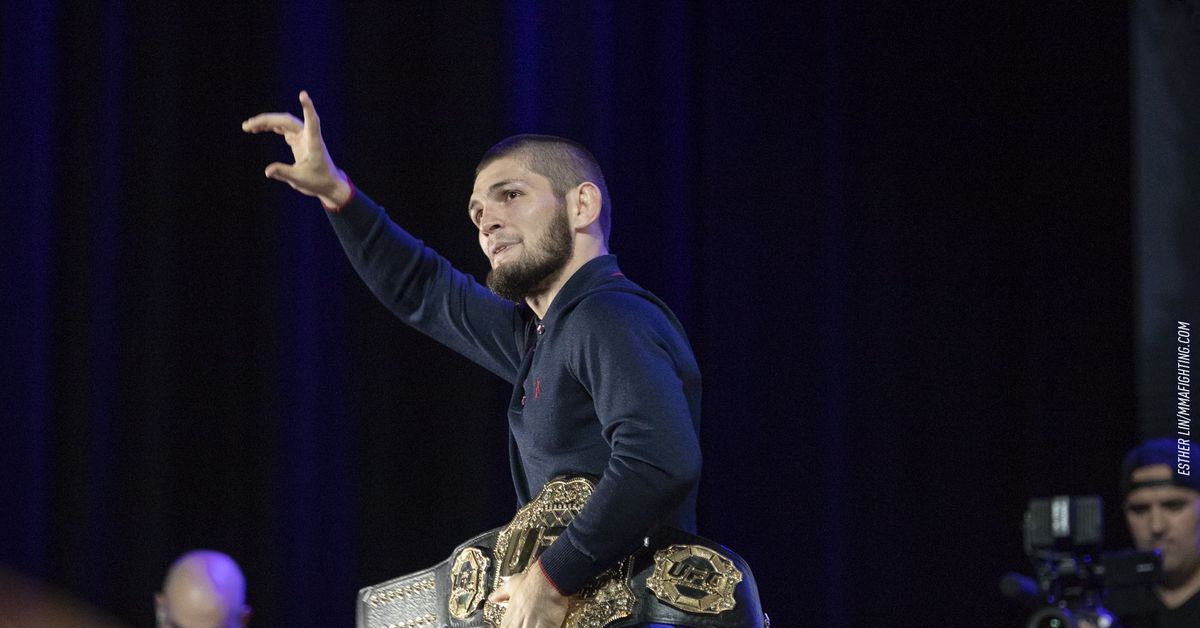 At UFC 254, Khabib Nurmagomedov successfully defended his lightweight title by submitting Justin Gaethje in the second round. He then shocked the MMA world by retiring from the sport, citing the passing of his father as the primary reason for hanging up the gloves. In the following weeks though, Nurmagomedov’s retirement has been called in to question, chiefly by UFC President Dana White who believes Khabib still has one more fight left in him. But though Khabib may not be officially retired, the lightweight champion is giving zero indication that he wants to fight again.

In a report from RT Sport on Thursday, Nurmagomedov recently addressed a group of young people, stating that he wants to spend his immediate future focusing on completing his education at the Plekhanov Russian University of Economics and tending to his farm.

“You can fight until you’re 40 but there should be a goal,” Khabib said. “I had a goal to reach the summit and I got there. Further, I have no competitive interest. Next year I will graduate. I’d like to (build on) my thesis, do a masters course, dedicate more time to studying. I’ve bought sheep, I tend to my farm. I’d like to develop in this field a little. I have the bull calves out to feed, I have cows.”

Aside from farming and continuing his education, the lightweight champion has also branched out into a variety of other businesses recently, launching his own mobile network, Eagle Mobile by Khabib, and starting an online coaching course. And as with many highly successful athletes there is a looming question of whether Khabib will eventually enter into the world of politics, something “The Eagle” says he has no interest in at this moment.

But despite Khabib’s steadfast insistence that he is done with fighting, Dana White continues to aver that he believes Khabib will return for one more fight. After all, Nurmagomedov has not yet left the USADA testing pool, which means there is still a chance it happens, and White says he’d be willing to bet on that chance.

“100 percent. I think there’s a good chance he does (come back),” White told TMZ Sports. “His father wanted him to go 30-0. Super emotional after that last fight. He’d been through a ton of sh*t. I think he will. Like I said, nothing’s done, but if I had to make a bet, and I am a betting man, I would bet that he does.”

And for what it’s worth, Dana White isn’t the only one. Khabib’s manager, Ali Abdelaziz, responded to the story of Khabib trading in his swords for plowshares by declaring it “fake news”.

Abdelaziz has not yet commented on whether Khabib will in fact retire, saying that he does not know whether the lightweight champion is done with fighting yet.

Nurmagomedov is currently 29-0 in his MMA career, is widely considered the greatest lightweight of all time, and sits atop the UFC’s pound-for-pound rankings.

Siblings fighting on the same card in the UFC.

MMA Vivisection. Breaking down all the fights at UFC 257.

I have always talked trash during weight cuts so that if I couldn’t make it I could say I told y’all I wasn’t sure. Maybe I’ve outgrown this. I did try to ask for a fight at 185 but maybe I just don’t have it anymore. I’m so thankful to all the kind people at the @ufc

Can’t believe I’ve even been here this long. Maybe I should just lay the gloves down. I don’t want it. I’m just in over my head with this weight. I was just 189 and now I’m 177 and I can’t sweat. I ran with a nice sauna suit , got in the portable sauna for 15 minutes , nothing

So easy for people to sit there and say shit but I swear I feel like anyone saying I’m weak for this doesn’t cut weight. It’s death to me. I’m dying already and have 6 more lbs to go. I know it doesn’t sound like a lot but it’s harder than the first 14.

I’m a fan of Ryan but he or his manager is delusional (which we all can be) how can we turn down fights that weren’t officially offered. I got offered a fight against another opponent and I accepted. I don’t pick my opponents ranked or not ranked everyone in the ufc is tough.

On top of that

Ryan Hall, who is ranked in the top 15, his opponents he’s beaten in the UFC have a combined record of 8-20, in each of their last 7 fights. 4 of those wins are.

Giving away the gameplan.

Chiesa got himself a fight.

Honestly, retiring to go farm seems like a a very fitting next step for Khabib. I wish him all the best.