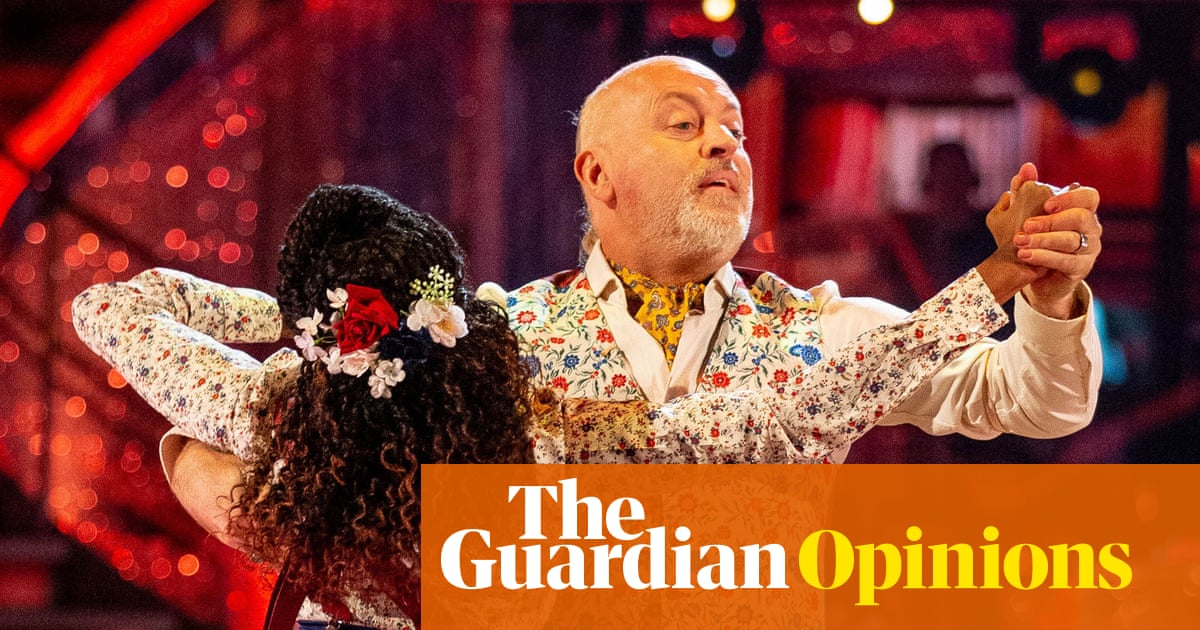 There are few things more overrated in life than being good at it.

Talent will out, obviously; and winning is always nice. But nobody loves a joyless perfectionist, who smugly gets everything right first time. It’s why Bill Bailey absolutely deserves to be the unexpected breakout star of this year’s Strictly Come Dancing even if (whisper it) he isn’t technically the most proficient dancer, and why the Great British Bake Off just hasn’t been the same since the eye-rolling Lottie was kicked off. Sarcastic, erratic, occasionally inspired and occasionally scraping melted icing off the counter with a sigh, she was the perfect mildly disruptive contestant for a wholly disrupted year. This series isn’t really about the baking or even about The Journey, a mawkish but artfully choreographed back story that helps contestants tug at the heartstrings. It’s more to do with the unexpected joy of doing things – by which I mean, of course, things that don’t actually matter – cheerfully but not all that well.

For a happy few, the idea that you don’t actually have to be any good at a hobby to carry on bashing away at it is old news. They’re the ones behind the rise of so-called tuneless choirs, or singing groups for people who can’t hit a note to save their lives but thoroughly enjoy belting a song out anyway; people who would be too intimidated to join a proper choir and be the only one singing off-key, but have found a way of letting rip without being made to feel self-conscious.

Bill Bailey: ‘Strictly’s been extraordinary! I’ve even surprised myself’

They’re also the driving force behind parkrun, which like Joe Wicks’s online PE lesson has been an absolute gift to those of us always picked last for netball. Sure, you can turn up in an athletics vest and take a Saturday 5k around the park unbelievably seriously if you want, killing yourself to meet last week’s personal best and bragging about it afterwards on Facebook. But you can (or could, before social distancing put a stop to it) also walk a bit, and run a bit, and walk a bit more before going to the cafe for cake; you could bring the kids, or the dog, and still raise a chorus of supportive whoops and cheers as you stagger over the finishing line last.

It is, as they always said at school but never really meant, the taking part that counts. The whole thing reminds me fondly of our old annual 5km village fun run, which was so uncompetitive that people did it with pushchairs or in flip-flops, and actually winning was considered a shade too try-hard. In a relentlessly goal-oriented world where even hobbies seem to come with performance targets attached, there’s something very relaxing about being publicly and unashamedly rubbish at something. It’s not about being unafraid to fail – the American philosophy of seeing mistakes as a necessary step in any learning process – so much as realising that in more human endeavours than we care to admit, failure itself is a fundamentally silly concept. Not everything has to be a race, a competition, your own private Hunger Games.

My own minor lockdown breakthrough was realising that yoga isn’t actually meant to be a competitive sport. It’s not about hovering miserably at the back of classes full of yummy mummies who can effortlessly do the splits, but about unrolling a mat somewhere quiet and being content just to stretch out whatever will comfortably stretch. The one saving grace of being once again confined to barracks now is that nobody outside can judge your faltering efforts to do a headstand, or indeed to come up with wildly exciting yet educational activities to entertain the children through the longest, dullest winter on record. And if a tree falls in the forest and nobody hears it, then who is to say whether the lumberjack is any good or not?

For anyone who struggles with nagging inner demons, meanwhile, there’s something comforting at the end of an exhausting year about the message that just doing your best (or even your half-arsed second best) will do. This year of all years, I’d have happily watched some mindless reality telly that didn’t actually have the heart to kick anyone off but instead just let all the contestants stay to the end, falling ever more magnificently short as the weeks wore on and the pastry challenges got more preposterous.

Life doesn’t have to be one long, dispiriting process of realising that you’re never going to excel at something and should therefore probably drop out with your dignity intact. It should be fine to dabble, to amble, to be gloriously and relentlessly average at something; to do it with no particular end in sight, except the killing of an afternoon. Winning at life, or striving to, can never become a substitute for actually living it.

• Gaby Hinsliff is a Guardian columnist