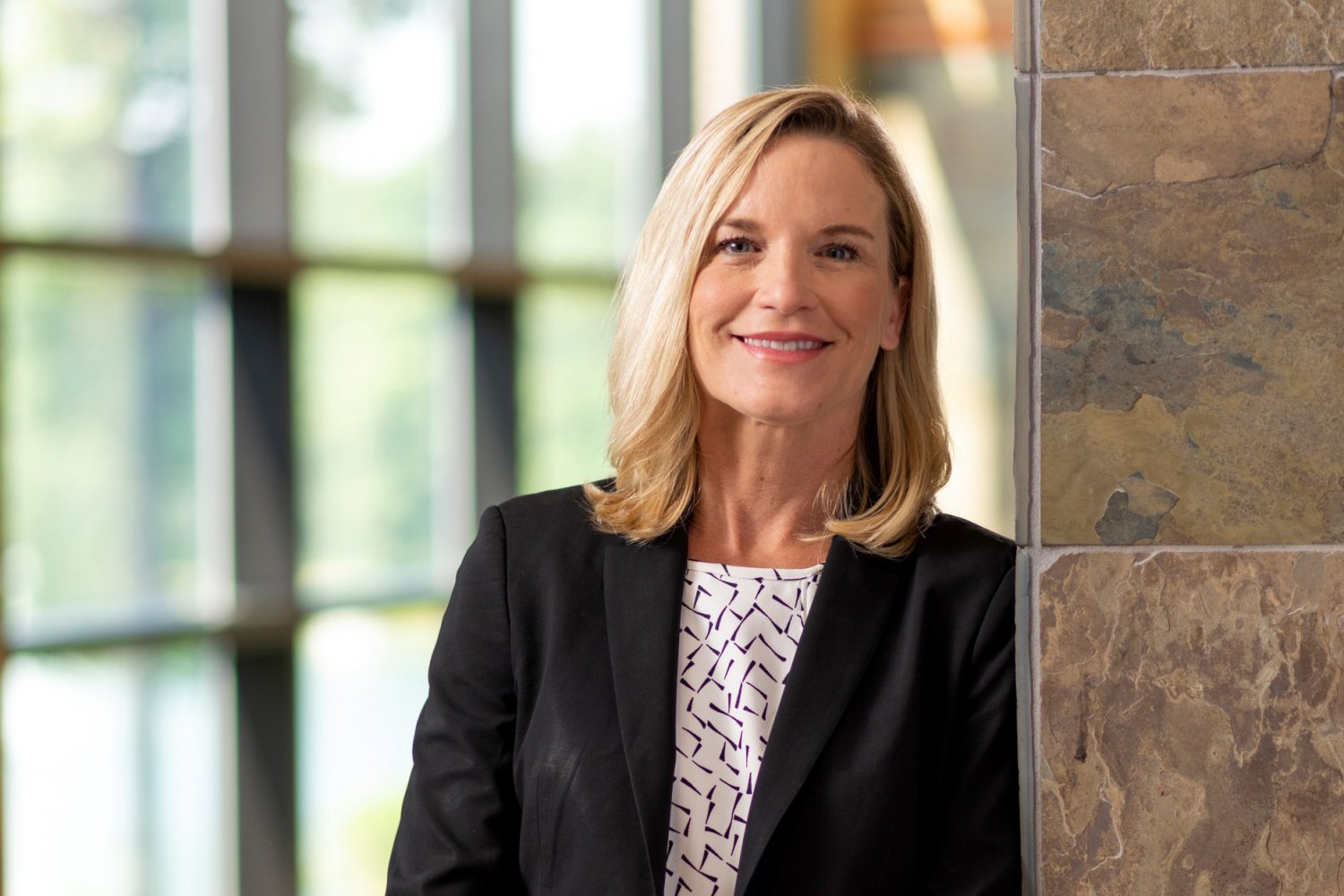 Even in the best of times, it’s a demanding job, requiring equal measures of manufacturing and management acumen. A recent market downturn has made it even tougher. Since Johnson took the helm of the group in 2016, lower commodity prices have squeezed mining firms’ profits and reduced their demand for equipment.

Johnson has ably steered Resource Industries through these lean times, aligning its cost structure with emerging market realities and “right-sizing” the business to match production to both customer and dealer demand. Even as she focuses on what her customers need now, Johnson keeps an eye on the horizon, anticipating opportunities presented by promising new technologies and applications for Caterpillar’s iconic machines.

It’s exactly the kind of challenge that she has been drawn to — and preparing for — ever since she arrived in Cambridge, Massachusetts, in 1995 as a new student in the MIT Leaders for Global Operations (LGO) program.

Johnson describes attending LGO (known at the time as Leaders for Manufacturing) as one of her most important career decisions. “Those classes and experiences really changed me as an individual, and my trajectory,” she says.

Today, MIT LGO students earn an MBA from the MIT Sloan School of Management and a master’s degree from the School of Engineering. In addition to the core curriculum for those two degrees, LGO students take tailored courses in leadership, go on “plant treks” to operations around the country, and participate in an immersive, six-month research fellowship with one of LGO’s 25 partner companies, such as Caterpillar, Amazon, Boston Scientific, Verizon, and Raytheon.

“The design of the program, having those industry partners and having them involved along the way, makes it really unique,” says Johnson. “It’s not an academic exercise, and it’s not just a science project.”

That kind of deep engagement with complex, real-world problems proved to be a transformative element of Johnson’ own experience.

“You’re always being challenged with relevant problems, and then asking, ‘How do you lead through that?’” she says. “A ‘continuous improvement’ mindset permeates the program.”

She has brought that mindset to a wide range of engineering, product development, operations, and manufacturing roles over the course of her 22-year tenure at General Motors, and her subsequent meteoric rise through the leadership ranks of Caterpillar since 2011.

GM felt like a natural fit: Johnson grew up in a small town in Michigan, with friends and family who worked in the automotive industry. She interned at GM during summers while she earned her mechanical engineering degree from Michigan State University, and then joined the automaker full time after graduating.

After six years of working in product development, she was eager to pursue graduate studies. She was admitted to several top programs, but a visit to MIT’s campus and meetings with LGO professors made her choice easy, she says. The dual structure of the program appealed to her: “It was the perfect mix of technical rigor and business.”

“But the element that was most powerful was leadership,” she says. “I had a pretty technical background, so I wanted a program that could give me a breadth of experience. Throughout the curriculum, we had a lot of discussion on what it means to be a leader.”

When she arrived in Cambridge, Johnson knew she wanted to explore new opportunities and gain wider exposure to manufacturing and operations processes, but she didn’t have a specific goal in mind.

“Before MIT, I had minimal exposure to manufacturing,” she says. “It was limited to opportunities to go into the factory just when we launched new products.”

Her time at LGO sparked a revelation. “Leaving the program, I knew I wanted to move into a leadership track. What I really wanted to do was lead people.”

The power of “continuous improvement”

Soon, Johnson was back at GM (which had sponsored her LGO enrollment) leading manufacturing teams.

“I thought that would give me first-hand experience, to lead people in a challenging environment,” she says.

It wasn’t long before she found herself preparing for her first negotiation with a local union. Lacking experience with union politics or labor relations, she turned instead to her notes from her MIT LGO negotiations class.

“I remember going through and making a list of what my BATNA (‘best alternative to a negotiated agreement’) was,” she recalls, “and how to get the people I was negotiating with to articulate what they were looking for in the settlement.”

The successful outcome of that first negotiation would presage bigger ones to come. In 2009, she was tapped to be GM’s vice president for labor relations. In that role, she oversaw the restructuring of employee benefits and contract changes in the wake of the automaker’s bankruptcy and subsequent federal government bailout.

She cites that early negotiation experience as an example of the way her LGO toolkit has served her well throughout her career. “You take those kind of things you learn at LGO and apply them to everyday situations, getting better and better as issues get larger and larger.”

This philosophy — combined with a penchant for running toward, rather than away from, thorny challenges — has become central to her leadership approach.

“I really do believe that for anyone to be a good leader, it takes practice and repetition and continuous improvement, and learning from each mistake you make,” she says. “I learned that at MIT. You can’t get through the rigor of the program without realizing that you can’t excel at everything. You have to prioritize and be able to improve.

“This mindset has also helped me and my team this year as we navigate Covid-19. The increased safety protocols we have put in place, and finding different ways to be flexible while still meeting our objectives, are actually things we should sustain even after Covid. I think if all of us took a step back and really reflected on our different situations during this continued pandemic, there are many things we have learned about ourselves — things we never thought we could do, or things we never thought we would try. To me, some of the best continuous improvement ideas can come from some of the toughest of times.”

Learning from classes and classmates

Even as she pursued a mechanical engineering degree, some of the LGO courses that most influenced Johnson were focused on building skills for working with people, rather than machinery. These included “The Universe Within” (about building and leading effective teams), “Leading from the Middle of the Organization,” and courses in negotiations and communications.

“The leadership-focused classes allowed me to take a step back and think holistically about strategy, about how to bring in elements from the technical end, and bring it all together,” she says. “I moved from an engineering product development role into a manufacturing role, and began to pivot my career around larger and larger opportunities.”

In 2011, she moved from Sao Paulo — where she led GM’s Brazil operation — to Illinois to become general manager of Caterpillar’s specialty products business unit. There, she led development and manufacturing of the critical components — such as hydraulic hoses, gaskets, bearings, and couplings — that keep Caterpillar’s mighty machines going.

Over the next five years, she steadily climbed the leadership ranks, serving as vice president of three different divisions — a rapid ascent capped with becoming the first woman in the company’s history to lead one of Caterpillar’s groups.

Today, along with guiding Caterpillar’s efforts to leverage advances in big data and machine learning to improve productivity and safety in the mining sector, Johnson is leading efforts to advance diversity and gender balance in the traditionally male-dominated world of heavy equipment manufacturing. She is the executive sponsor of Caterpillar’s Women’s Leadership Initiative, which aims to boost external recruiting and hiring of women and elevate women leaders within the company.

“It’s important as leaders that we focus on building the best team — and that means pushing ourselves to listen to others, having diversity of thought, and ensure the team itself is diverse. Many times over my career I have reached out to my LGO classmates to gain their perspectives, and I continue to do that today. I also challenge myself when hiring to look at a diverse slate of candidates: Don’t just go with who you know, broaden your search and look for those you may not have considered before. Diversity of thought makes good business sense; listening to all ideas is how businesses will continue to grow and thrive.”

She’s also deeply involved in shaping and supporting MIT LGO, as co-chair of its governing board.

“Denise has been a pioneer throughout her career in a male-dominated engineering world,” says MIT LGO Executive Director Thomas Roemer. “Her leadership skills, informed by her deep technical expertise, have proven her effectiveness over and over again, and have made her one of the most successful women in American industry. MIT LGO is proud and privileged to have her as a distinguished alumna.”

Over the years, Johnson has also kept in close touch with fellow LGO alumni working in different industries, from aerospace to agriculture. When a knotty problem comes across her desk, she sometimes gives them a call. “If I have a relevant problem, I have a network of people I can instantly reach out to and bounce ideas off of,” she says, “people who often have a different perspective.”

She’s also drawn on her network, and her own engineering and product innovation background, to guide her group’s strategy for autonomous vehicles, automating mine operations, and incorporating advances in machine learning. Caterpillar has been working on autonomous vehicles for nearly four decades, but in recent years the RI group has sought to take advantage of technological advances to expand its offerings of its Cat Command system to help mine operators improve efficiency, productivity, and safety. There are now more than 330 autonomous mining trucks in operation, and by year-end the company expects to have 400 autonomous mining trucks in operations in 11 different mining sites.

To keep pace with such changes, the LGO curriculum has evolved since her student days. Some elements — such as data mining, programming in Python, and machine learning — might be unfamiliar to the 1990s-era student. But LGO’s core mission remains the same: cultivating leaders who can manage complex operations. “There’s a reason that ‘Leaders’ is the first word in the name of the program. This is all about training tomorrow’s leaders. That will always be relevant.”

That’s why Caterpillar has hired many LGO alums. “At Caterpillar, we need people who can work across the matrix, through a lot of complexity,” she says. “All the LGO grads we’ve had here are high-level thinkers and problem-solvers, and not afraid to do hard work. There’s a willingness to experiment and try new things, push the edges.”

“The reason I’ve stayed involved with the LGO program is that it truly is the single biggest influence that had a difference in my career trajectory,” Johnson says. “I feel a responsibility to not only pay back what was given to me, but to help lead it moving forward. I feel passionately that the program can be life-changing for those who attend it.”