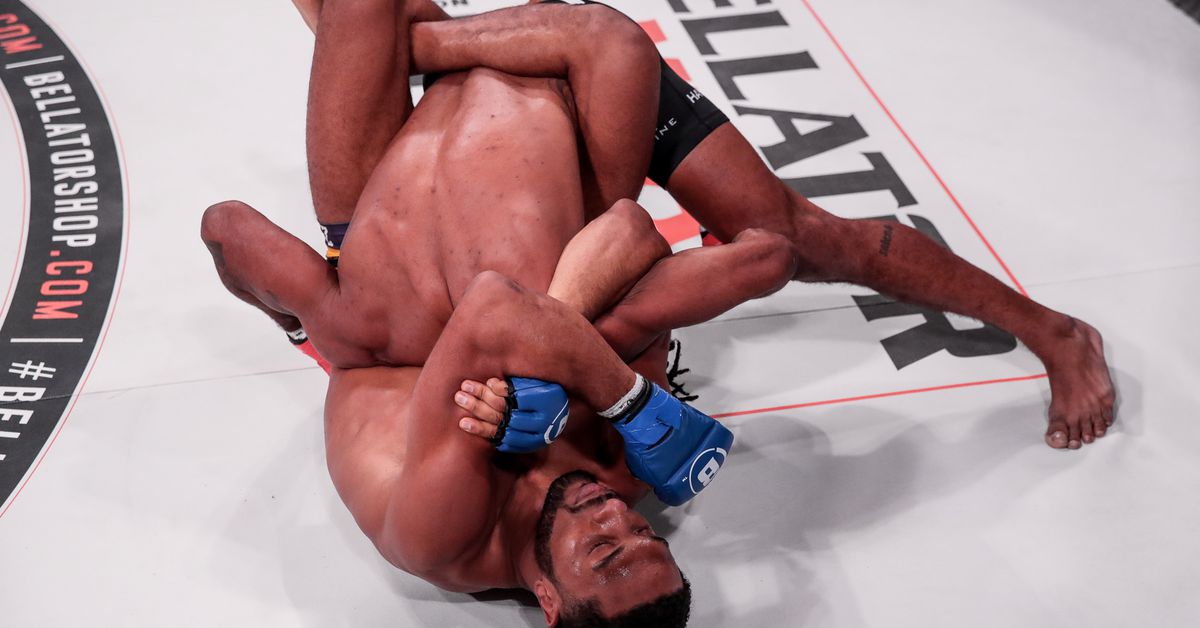 A.J. McKee will advance one step closer to the Bellator featherweight title after securing a spot in the finals of the promotion’s featherweight grand prix with an impressive first-round submission of Darrion Caldwell at Bellator 253.

McKee secured extended his unbeaten streak to 17 fights and put a former champion on his resume with a neck crank that brought a quick stoppage to the main event of Thursday’s fight card, which served as a semifinal bout in the $1 million tournament.

Caldwell secured an early takedown and was just beginning to unload with elbows when McKee wrapped his right arm under the ex-bantamweight champ’s left and used his own left arm and a body triangle to apply pressure. Caldwell was too deep in the hold before the pain overwhelmed him and he tapped at the 1:11 mark of the opening frame.

Check out the eye-popping finish.

“I like to put a lot of leverage,” McKee said afterward. “You know me, it’s all about the angles. You have the right angle, you can make anything work.”

McKee, 25, punches his ticket to the finals one week after Freire advanced to the semifinals with a knockout of Pedro Carvalho. The two-division champ will defend his featherweight belt again in a semifinal meeting with Emmanuel Sanchez, whom he previously defeated by submission.

“That’s the beginning of the beginning,” McKee said of his top spot in the tournament. “A childhood dream. I wrote myself a million dollar check, and I look forward to cashing it. ‘Pitbull,’ even if you don’t make it, I’m coming for my 50-pound title. It’s nothing personal, it’s just business.”

The main event brought a jolt to the evening’s affairs after a night of lopsided decision wins. In the co-headliner, former UFC lightweight champion Benson Henderson stumbled again in the 170-pound welterweight division, getting outmuscled and outpositioned by bigger Jason Jackson.

Jackson on several occasions stung Henderson with heavy kicks and punches, and he caught or absorbed the kicks Henderson has used to rack up points against other competitors. Once comfortably in control, he did little else to up the intensity and cruised to a comfortable win by holding dominant positions on the mat and doing enough to keep them.

In a lopsided win, Joey Davis showed Bobby Lee there are levels to elite wrestling and extended his unbeaten streak to eight fights.

Davis, a three-time NCAA Division II wrestling champ, took Lee down at will and nearly earned a knockout in the first round with a series of right hands that badly stunned his opponent. Lee managed to survive, but not much more as his offense was limited to short kamakaze charges that frequently ended with a trip to the mat.

By the third round, Davis had Lee’s arm trapped behind his back and was pounding away. Were the shots as well-aimed as the first round, Lee might have expired right there. Instead, he tried to talk himself into standing up. That didn’t happen before the final bell.

Raufeon Stots bested Bellator veteran Cass Bell with impressive grappling. But against Keith Lee, younger brother of Kevin Lee, he was dominant at every range.

Stots repeatedly held the center of the cage and outstruck Lee before nabbing takedowns that had him in prime position to pull off a choke. Lee proved adept at working out of trouble, but when final scorecards were tallied, Stots had puled off the clean sweep with unanimous 30-27 scorecards.

In the final frame, a low kick visibly hurt Lee, and Stots moved in to close with a flurry of punches. The finish eluded him, but the late-round takedown was followed by a knee to the chin at the bell that punctuated his victory. Lee’s best work came in the first with a head kick late in the first frame that Stots ate whole before getting his opponent’s back on the mat.