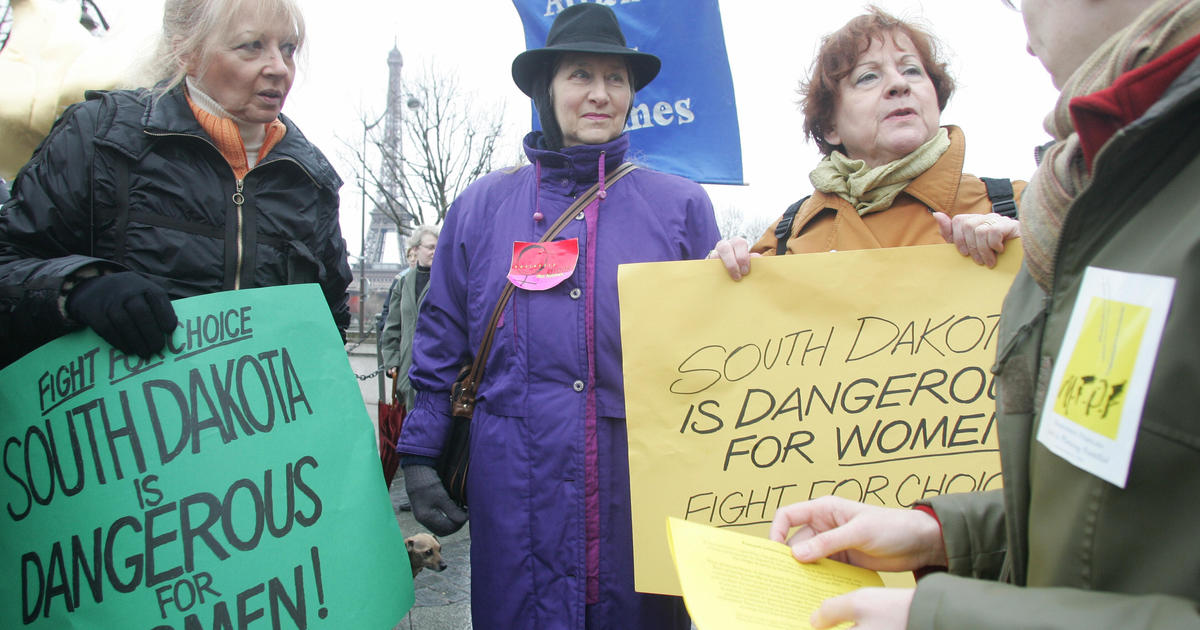 Technically, abortion is legal in South Dakota. But for all but one day of the month, it might as well not be.

For decades, patients seeking an abortion have faced barriers in South Dakota — a state that’s home to dozens of restrictions and only one clinic — but the coronavirus proved to be an obstacle too much to overcome. After years of flying out-of-state doctors to its lone health center in Sioux Falls, Planned Parenthood halted abortion services there in March, citing travel concerns caused by the virus. For seven months this year, abortion wasn’t available in South Dakota, marking the longest a state has gone without the procedure since it was legalized nationwide nearly 50 years ago.

Abortion services resumed in October, but only for one day a month. Sarah Stoesz, who leads the clinic, says there aren’t enough appointments for everyone that’s called to request one. Instead, they’ve had to tell patients to wait until the next month or go out of state. She says she’s sure that not everyone who wants an abortion in South Dakota is able to get one.

“People assume that Roe v. Wade is the law of the land and that means that if they need help they can get help, but that’s not true in places like South Dakota,” said Stoesz in a telephone interview.

It wasn’t a specific law that halted abortion services in South Dakota, but the culmination of state-level restrictions that have nearly regulated the procedure out of existence, Stoesz said. In 1973 the Supreme Court’s decision in Roe v. Wade legalized abortion nationwide, but subsequent rulings gave states broad authority to regulate the procedure as they saw fit. Decades later, hundreds of restrictions and regulations mean that how, when or whether patients have access to abortion varies drastically from state to state.

South Dakota has been on the forefront of those laws, passing regulations years before they become mainstream in the anti-abortion rights movement, according to Elizabeth Nash, who tracks abortion regulations at the Guttmacher Institute, a reproductive research group that supports abortion rights. Since Roe v. Wade, lawmakers in the Mount Rushmore state have enacted 38 restrictions, many of which were authored and championed by South Dakota state senator Jeff Monroe.

The state now has the strictest abortion regulations that courts have allowed to be implemented. The procedure isn’t available after 20 weeks in a pregnancy, the point at which doctors are able to detect fatal fetal abnormalities. The state also mandates a 72-hour waiting period, requiring patients to make two trips to the Sioux Falls clinic.

South Dakota is the only state that prohibits Medicaid and other government-funded insurance plans from covering abortion for victims of rape and incest. Only when the patient’s life is in danger is public funding available. Insurance plans offered on the state’s health exchange under the Affordable Care Act are also barred from covering abortion services except in cases of life endangerment or severely compromised physical health.

The combination of all those restrictions whittled abortion access in the state to Planned Parenthood’s one clinic in Sioux Falls, which Lindwurm and his group, 40 Days, gather to pray outside of every day. In a little more than a decade, the number of abortions performed in the state has fallen by more than half, from 848 in 2008 to 414 in 2019, according to the South Dakota Department of Health’s annual “induced abortion” report.

Prior to the coronavirus, abortions were performed once a week on Thursdays by a small group of out-of-state doctors who would fly in for the day to see patients. Snowstorms in the winter regularly delayed flights, disrupting the clinic’s schedule and sometimes forcing Planned Parenthood to cancel appointments. The pandemic threw a wrench into the already tenuous system.

“It was a really, really hard decision to suspend services, and really painful for us, especially after decades of working so hard to keep services open,” said Stoesz, the local Planned Parenthood president. “But we just couldn’t overcome the coronavirus.”

Unlike other clinics that had abortion services interrupted due to the pandemic, South Dakota’s shutdown was not imposed by the state. In Texas, for example, a state-mandated month-long suspension of abortion services this spring prompted a legal back-and-forth that pushed services to resume. But in South Dakota, because there was no restriction that suspended services, there was no legal recourse.

When abortion services were shuttered in Texas, patients broke stay-at-home orders and crossed state lines to get the procedure, data from Planned Parenthood shows. Clinics in Colorado, New Mexico and Nevada saw 129 patients from Texas between March 23 and April 14, a more than 700% increase from the month prior. During the same period in 2019, those clinics saw 14 patients from Texas.

South Dakota patients have been similarly undeterred. So far this year, the South Dakota Access for Every Woman, a small group run by a pair of sisters in their seventies that helps patients pay for their procedure, has helped more than 150 women. That’s slightly more than usual, said Evelyn Griesse, who runs the fund with her sister Ann. With abortion services unavailable in their own state, they’ve also helped patients navigate the logistics of out-of-state travel and local abortion restrictions against the backdrop of the coronavirus pandemic.

“[Our clients] thought they knew that abortion was legal and available, but they didn’t have any idea how to go about getting one. And when they realized how hard it was, it turned their world upside down,” said Griesse.

This year’s interruption of abortion services in the state was personal, she said. In the early 1970s prior to Roe v. Wade, Griesse, unable to get a legal abortion in South Dakota, traveled to New York to have the procedure. It was an easy trip to make if you had some money, she said, but impossible if you didn’t. The experience prompted her to start the fund nearly 50 years ago.

“With Roe coming up in the Supreme Court, I felt I really owed people for the work they had done in places like New York and California to keep it safe and legal. I needed to pay it forward,” Griesse said.

For many of Griesse’s clients, money isn’t enough. Nearly two-thirds of patients seeking abortion in South Dakota are already a parent, making chlidcare an issue when traveling out-of-state for an abortion. Another hurdle: Many patients don’t have their own car. To help, Griesse works with volunteers from across the state to arrange elaborate, multi-point travel schemes for patients to get to their appointments, no matter how far.

A new abortion-rights group in the state, Justice Empowerment Network, started earlier this year to help address those problems.

“It’s legality versus access,” said Kim, one of the co-founders of J.E.N., who requested her last name not be used out of fear of harassment. “It doesn’t matter if it’s legal if there’s no doctor within five hours of you and you don’t have a car.”

Today, South Dakota is one of five states — along with Mississippi, Missouri, North Dakota, and West Virginia — that have a single abortion provider. For 27 U.S. cities with more than 50,000 people, there is no abortion provider within 100 miles.

“Of course Roe matters, but in some parts of the country Roe is functionally irrelevant,” said Stoesz. “It’s no longer a hypothetical to get rid of abortion, it’s real, and it’s real today for women in South Dakota.”

Even as coronavirus cases surge, Stoesz said there won’t be any interruption of services at the Sioux Falls clinic moving forward due to the virus. But how long the clinic can remain financially viable is a looming problem, Stoesz said.

Today, more than a dozen abortion-related cases are one step away from the Supreme Court. A handful directly challenge Roe v. Wade, including Mississippi’s 15-week abortion ban. If the court reverses the landmark decision, 10 states, including South Dakota, have so-called “trigger” bans in place, laws that automatically prohibit abortion in the event the landmark decision is overturned. South Dakota’s is the strictest of all: Not only would abortion be prohibited, but so would assisting patients in obtaining the procedure, making the work the Griesse and Kim do illegal. Kim said even if that happens, she won’t back down.