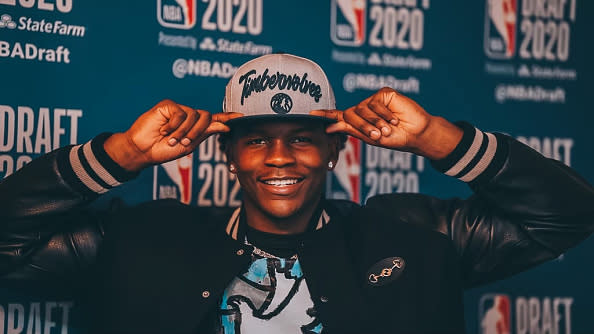 After a couple of days of huge trades leading up to it — Chris Paul to Phoenix, Jrue Holiday to Milwaukee — the 2020 NBA Draft was set up to be a wild night full of surprises and bold trades.

Then it pretty much followed form. It wasn’t dull, but it lacked the kind of “I DID NOT SEE THAT COMING” moments we have come to expect from the NBA.

Still, there were winners and losers. Let’s break it all down.

Charlotte needed a star player, an alpha, a north star by which to set their direction. The one player in this draft most capable of reaching that level? LaMelo Ball — and he fell to the Hornets at No. 3.

Ball is a 6’7″ point guard with impressive handles, a true gift for seeing the floor and passing, plus some deep (if inconsistent) shooting range. If he puts in the work on his shot, if he improves defensively, if he adjusts to making better decisions when confronted with NBA defenses, Ball could be an All-NBA player. There are a lot of people around the league who don’t believe he can reach that potential, but if he does, if this pick hits, the Hornets got their star.

Taking the gamble makes the Hornets winners on draft night, even if Ball doesn’t quite pan out.

Check out more news on the NBA Draft

If you get drafted No. 1, you are a winner. No matter how much basketball you watch.

He also should be a good fit on the wing offensively between D’Angelo Russell and Karl-Anthony Towns in Minnesota. If this team can get stops, they are in a good spot.

Minnesota was on the phone until the final minute before they had to decide with the No. 1 pick, and then they took Anthony Edwards. Golden State was more than willing to trade the No. 2 pick for the right offer, but they ended up taking James Wiseman.

And so it went all night. In a draft where every player had concerning flaws and teams were all over the board on prospects, nobody was willing to pay the price to make a serious move up the board. Teams largely stayed put. There were a handful of trades, but the most interesting one was not about the draft but about Josh Richardson going to Dallas and Seth Curry going east to Philadelphia.

Everyone is a winner here. The Wizards are winners because they didn’t think the 6’9″ point forward would fall to them at No. 9 (a lot of mock drafts had him going at No. 4). Avdija is the kind of ball-moving secondary playmaker on the wing who could fit well with the explosiveness of John Wall and Bradley Beal (or Russell Westbrook, if you want to play that game).

Avdija won the Zoom meeting that was the draft because he had by far the best backdrop — a restaurant loaded with wine bottles. Or his wine cellar. Wherever that was, we all wanted to be there.

Sacramento is the winner of this year’s “I can’t believe he fell to us” award, but they took advantage of it and drafted Tyrese Haliburton at No. 12. This is a polished guard who can play off the ball next to De’Aaron Fox and also back him up at the point. He should fit well with Buddy Hield at the two as well. For a team trying to leap up into the playoffs, this was a strong pick.

The Kings did well in the second round as well. Michigan State’s Xavier Tillman Sr. is a first-round talent that fell to the second round and will have a role in Sacramento. Guard Jahmius Ramsey out of Texas Tech is another strong second-round pick.

The Kings have made so many good moves this offseason, particularly trading for Chris Paul, but their draft-night moves were perplexing.

They could have drafted Haliburton but instead made a very early reach for Maryland big man Jalen Smith at 10. It’s an odd fit for a team that already has Deandre Ayton at the five (unless Ayton wants to be a four, or they picture Smith as a four, which he is not). Most teams saw Smith as a late first/early second-round pick; the Suns could have traded back 10 spots, still gotten him, and picked up a second-rounder.

The thing is, the Suns did this exact same thing last year with Cameron Johnson. Those that do not learn from history are doomed to repeat it.

Check out the latest news on Westbrook and Harden trades