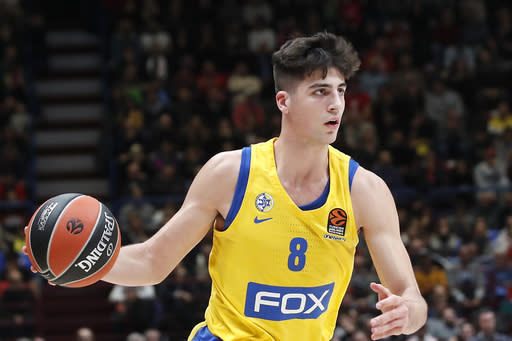 WASHINGTON (AP) — Israeli teenager Deni Avdija was taken by the Washington Wizards with the No. 9 overall pick in the NBA draft Wednesday night, giving them a versatile, playmaking forward with a still-developing game who could be a part of the team’s effort to turn things around after missing the playoffs the past two seasons.

The 6-foot-9, 225-pound Avdija, who helped Israel win the FIBA U-20 European Championships in 2018 and 2019, is a good ballhandler and passer but does come with questions about his shooting touch.

He became the youngest player to play for Maccabi Tel Aviv when he began his professional career in 2017. Now he is first top-10 NBA draft pick from Israel.

Wizards coach Scott Brooks is entering the last season of his five-year contract and his hope is that there can be some improvement thanks to the return to action of point guard John Wall, the five-time All-Star who missed most of the 2018-19 season after heel surgery, and all of 2019-20 with a ruptured left Achilles tendon.

Barring a trade, Wall and shooting guard Bradley Beal will be counted on to lead Washington back to relevance and get back to its status as a postseason participant after the club was 25-47 this season, following a 50-loss campaign the year before.

Beal finished second in the NBA in scoring this past season by averaging 30.5 points, behind only James Harden.

A year ago, when the Wizards selected Japanese forward Rui Hachimura at No. 9 overall, Sheppard still was toting an interim tag following Ernie Grunfeld’s departure.

Hachimura was a starting forward this past season, and is among the young players Washington hopes will help down the road, along with 2018 first-round pick Troy Brown Jr. and center Thomas Bryant.

Another key element will be whether the Wizards can re-sign swingman Davis Bertans, a top 3-point shooter who is an unrestricted free agent.