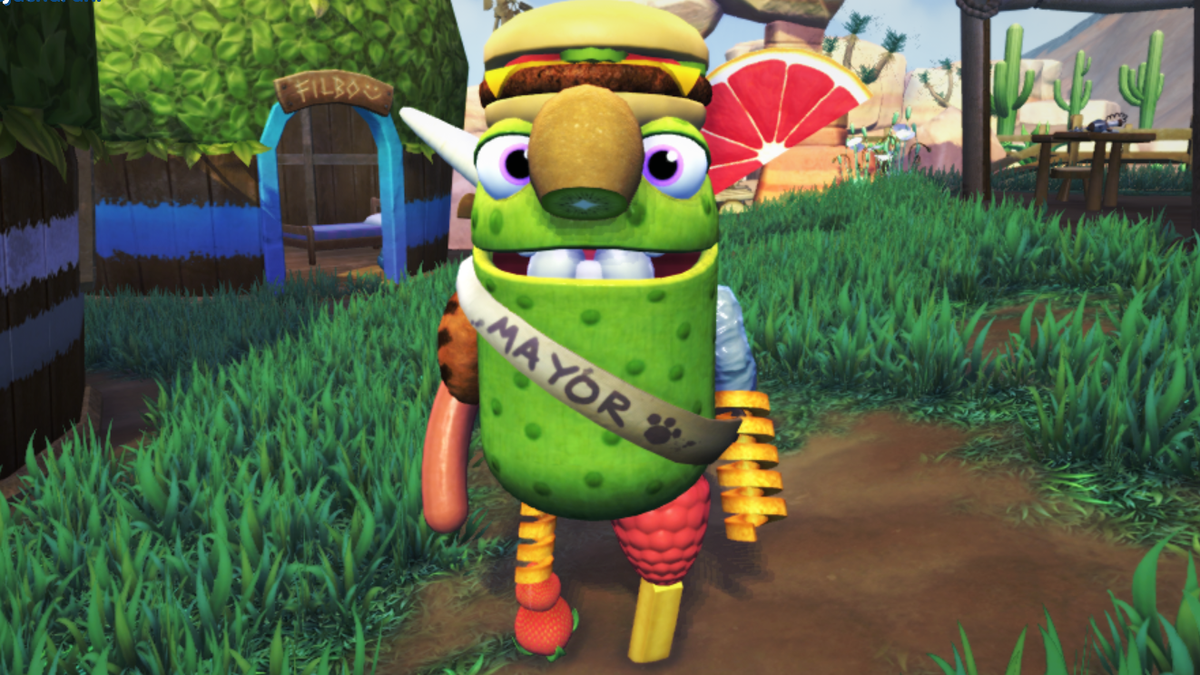 Bugsnax looks exactly like the kind of adventure games I enjoy. A quirky world where you can run around catching cute critters that could sit comfortably next to Slime Rancher and Ooblets. The titular bugsnax themselves are a bit weird, but the game radiates good vibes. Until it doesn’t.

It might appear whimsical in nature, but it quickly becomes apparent that the world of Bugsnax has a sinister underbelly, and it all begins with Snaktooth Island’s creepy-crawly residents.

For a species that in concept is pretty disturbing, the half-bug, half-snack creatures are adorable. They have giant googly eyes, cute Pokémon-like voices, and little emojis that pop up above their heads to show how they’re feeling. They’re an inquisitive bunch, roaming freely around the many biomes of the island.

They’ve been designed for maximum cuteness (as cute as snack food can get). There’s chippie, a chocolate chip cookie with legs that scurries across the floor, a sprinklepede, which is a pink doughnut with rainbow sprinkles for legs, and—one that I found particularly adorable—pinkle, a group of pickles that retreat back into their jar like a hermit crab when they get spooked.

Most bugsnax will scuttle away into a nearby bush for safety if you approach, while others will charge towards you in a fit of anger. Even when I’m frantically running away from what essentially is a tin foiled potato with pincers, the bugsnax always manage to melt my heart.

The first one you’re introduced to is a strabby, a jittery little strawberry and the most delightful bugsnax in the game (although the competition is tough). I’m tasked with catching one of these little cuties and then giving it to a blue grumpus named Filbo. The grumpus who live on the island want the bugsnax so they can eat them, and their eagerness to eat sentient food is a bit disturbing.

I catch the strabby in my trap and return to the grumpus, but as I attempt to hand it to him, he opens his mouth expectantly. I pause for a moment, confused. Does he want me to feed it directly to him? He stands there in silence with his giant maw open in anticipation as I hold the strabby suspended above him. I nervously bring the strawberry down into his mouth, the grumpus snaps it up. Down the gullet the strabby goes, and as it gets digested part of Filbo’s forearm morphs into a strawberry. Uhh, what just happened?

Filbo seems perfectly happy with this transformation. It’s one thing having a creepy lust for sentient foods, but it’s another to shrug off the monumental side effects they inflict on your body. It brings a horrifying new meaning to ‘we are what we eat’.

Confused, and slightly upset at what I had to just witness, I follow Filbo to the island’s main village to meet the rest of his grumpus pals, intrigued to understand what Snaktooth Island’s residents think of the bugsnax. One character says that the bugsnax are toxins for the body, another sees them as pets to be trained, and one grumpus only sees the critters as livestock, creatures purely made to be harvested and consumed—just a bit upsetting.

It gets weirder. A little later into the game, you meet a grumpus named Floofty who gives you a device called the snackivator, a contraption that allows you to choose the body part that gets changed in the grumpus digestion process.

Floofty is a mad scientist who is obsessed with the bugsnax’s transformational powers and wishes to harness this raw power for themselves. Wanting to understand and ultimately control this power, they’ve started to experiment with the revival properties of the bugsnax, using their own body as a test subject. As part of Floofty’s not-so-safe bio-hacking, they ask you to change every part of their body completely into snacks. I have some regrets about helping them.

After many sacrificed bugsnax, the experiment is done. Floofty is now a mess of cinnamon rolls, crisps, kiwis, raspberries, taco shells, weenies, popsicle sticks, and who knows what else. The transformation was a success. They are 100 percent snack.

My time on Snaktooth Island has been a strange one. I love anything that walks the fine line between cute and creepy, and Bugsnax does exactly that. I remember seeing the credits roll, so I must have finished the game, although I’m not sure if what I saw was the ending or a food-infused fever dream.