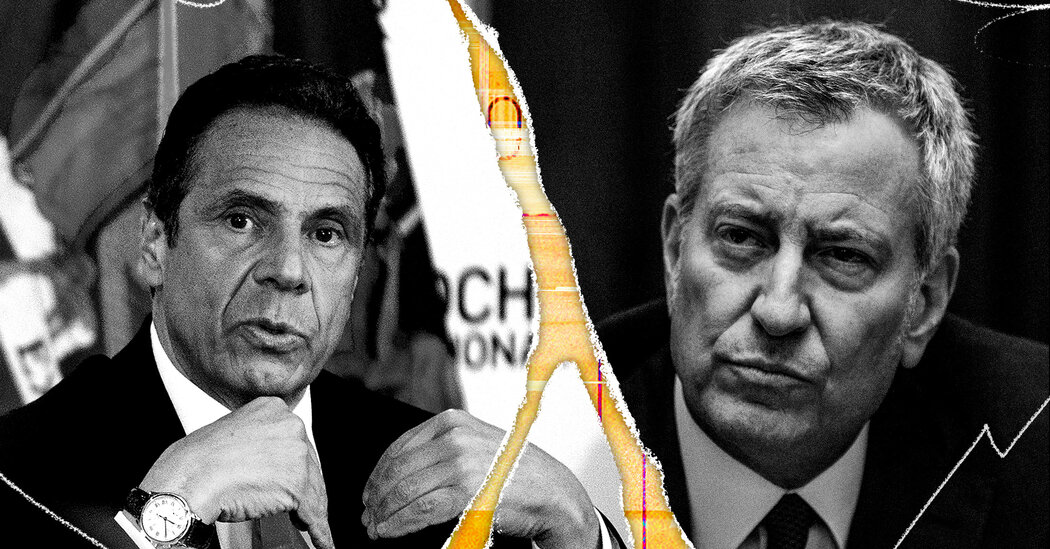 This article is part of the Debatable newsletter. You can sign up here to receive it on Tuesdays and Thursdays.

For months, New York City managed to keep the coronavirus under control — until it didn’t.

As coronavirus cases surge to fearsome levels across the country, Mayor Bill de Blasio announced on Wednesday that the city’s positivity rate, which had been rising steadily since October, had exceeded 3 percent, setting off a shutdown of the city’s public school system, the nation’s largest. It’s a major setback for the city’s recovery, as well as a source of fury for parents baffled by the priorities the move telegraphed: As schools closed on Thursday, limited indoor dining continued and gyms remained open.

The situation is not unique to New York. “In many American cities,” my colleague Binyamin Appelbaum wrote on Twitter, “children are allowed to eat in restaurants but not to learn in classrooms.” Why? Here’s what people are saying.

How risky are schools?

There isn’t a uniform answer. So far, the bulk of the evidence suggests that schools, especially for younger children, are not stoking community transmission of the coronavirus.

“The more and more data that I see, the more comfortable I am that children are not, in fact, driving transmission, especially in school settings,” Brooke Nichols, an infectious-disease modeler at the Boston University School of Public Health, told my colleague Apoorva Mandavilli. In New York City, for example, the positivity rate in schools is a small fraction of the general population’s.

But much of the evidence about the risk of school reopenings is flawed and the research inconclusive, especially when it comes to middle- and high-school students. In the absence of a firm consensus, experts told Ms. Mandavilli in September that they agreed on one point: Schools should reopen only if community transmission is low — that is, if less than 5 percent of people tested receive a positive result. By that measure, most school districts in the nation would not be able to have in-person classes without problems, though New York City theoretically could — for now.

Thresholds for what constitutes low community transmission are somewhat arbitrary in the United States, since most places are not testing enough asymptomatic people to obtain a truly accurate picture of infection levels.

But to the extent that it can be known, “the No. 1 factor is what your local transmission is like,” Helen Jenkins, an expert in infectious diseases and statistics at Boston University, told Ms. Mandavilli. “If you’re in a really hard-hit part of the country, it’s highly likely that somebody coming into the school will be infected at some point.”

‘Exactly the opposite of what we should be doing’

Many public-health experts say that closing schools first defies epidemiological explanation. Virtually all social activities during an outbreak of this magnitude carry risk, and determining which to cut back on requires weighing a restriction’s benefits against its harms. Some have analogized this calculus to that of a budget:

In the budgetary analogy, trying to reduce coronavirus risk by closing schools is like trying to save money by canceling your electricity service: modestly effective in some cases, maybe, but not exactly the first expense to cut.

Restaurants, gyms and other crowded indoor sites accounted for some eight in 10 new infections in the early months of the U.S. coronavirus epidemic, according to a November analysis. “These are the activities responsible for a vast majority of transmissions, and these should be the focus of our initial interventions,” Aaron E. Carroll writes in The Times. “Because schools are not the major cause of the problem, shutting them down won’t do enough on its own to slow the spread of the disease.”

But shutting schools down will do — and has already done — a great deal of harm, the Times columnist Nicholas Kristof argues. “America’s education system already transmits advantage and disadvantage from one generation to the next: Rich kids attend rich schools that propel them forward, and low-income children attend struggling schools that hold them back,” he writes. “School closures magnify these inequities, as many private schools remain open and affluent parents are better able to help kids adjust to remote learning. Meanwhile, low-income children fall even further behind.”

What’s more, the American Academy of Pediatrics has said that school is an important bulwark against hunger, social isolation, physical and sexual abuse, drug use, depression and thoughts of suicide. Removing it “places children and adolescents at considerable risk of morbidity and, in some cases, mortality.”

The damage done is not only to children. In opposite-sex couples, the burden of unexpected family needs tends to fall on women, a pattern the pandemic has thrown into stark relief: About 1.6 million fewer mothers are in the labor force this fall than would be expected without school closures. In many cases, the gendered division of parental labor has not just pushed women out of jobs they held, but also prevented them from seeking new ones, causing potentially permanent economic scarring.

“Other countries have social safety nets,” Jessica Calarco, a sociologist at Indiana University, told the journalist Anne Helen Petersen. “The U.S. has women.”

The alternatives on the table

There are many ways we could keep schools safe if we chose to: Making class sizes smaller, staggering lesson times and requiring universal masking would all help, as would moving some classes to auditoriums, libraries and vacant buildings, Dr. Carroll argues.

Measures could also be taken elsewhere that would significantly reduce risk but still fall far short of a lockdown. “What the public interest requires for now is a suspension of indoor dining in areas where the virus is spreading, combined with federal aid to keep restaurants in business,” The Times editorial board writes. “While that alone wouldn’t totally control the virus or reopen schools, it would help.”

It’s an approach that would require billions of dollars from the federal government, but it would be well worth the investment, Dr. Carroll argues: “When — not if — businesses are forced to shutter temporarily in the near future, we can tide them over with money, and we absolutely should. When schools are closed, however, handing students a check will not replace what they’ve lost.”

That leads one back to the central and intractable problem, however, which is that neither businesses nor children are getting a check anytime soon, as The Washington Post’s Jeff Stein has reported. The Senate returned from recess last week to confirm more of President Trump’s judicial nominees but adjourned on Wednesday until after Thanksgiving, with a prospective relief bill nowhere in sight.

In the absence of aid, many restaurants are warning that they will not be able to make it through the winter without indoor dining, putting workers in an even tighter vise.

“It’s not like we get the luxury of just staying home,” Isis Usborne, a worker at a burger joint in Denver, told Colorado Newsline. “I feel like there’s not any kind of support from our government. I feel like they’re just hoping that more of us die, so that they don’t have to worry about us. And then they’re going to be real upset when they realize that means we can’t make their burgers.”

Complicating the calculus further, many federal and state officials have said that the current surge in infections is being driven in no small part by private social gatherings. “What we’re seeing as the increasing threat right now is actually acquisition of infection through small household gatherings,” Robert Redfield, the director of the Centers for Disease Control and Prevention, said last month. “Particularly with Thanksgiving coming up, we think it’s really important to stress the vigilance of these continued mitigation steps in the household setting.”

Closing businesses, then, might do less good than some hope, and might even be counterproductive in the case of restaurants, Christian Britschgi argues at Reason. “If people aren’t allowed to socialize in a sanitized, socially distanced, well-ventilated restaurant, they might be more likely to gather in private homes that might not have any of those measures in place,” he writes.

If there are any loose ends to be found in this Gordian knot, it lies with those in possession of the means to stay home, who have both more power and more duty to save lives this winter than they might think.

“‘Personal responsibility’ is bad public policy,” the journalist E. Alex Jung tweeted. No doubt, but the public policy we have is even worse.

Do you have a point of view we missed? Email us at debatable@nytimes.com. Please note your name, age and location in your response, which may be included in the next newsletter.