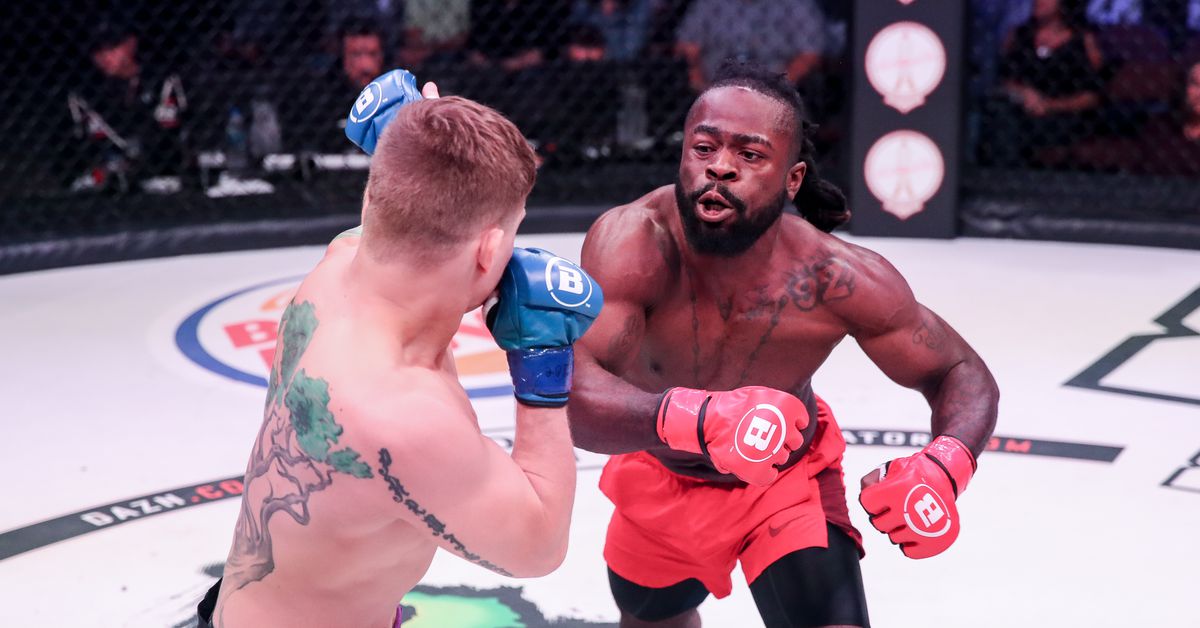 Few athletes make their professional fighting debut on a stage as large as Bellator MMA much less under the kind of spotlight that shone upon Kevin “Baby Slice” Ferguson when he made his first appearance in 2016.

As the eldest son of legendary street fighter turned mixed martial artist and boxer Kevin “Kimbo Slice” Ferguson, the now 28-year-old prospect understood that he was going to live under the microscope as soon as he made combat sports his career.

With a 3-2 record with one no contest on his resume, every win made “Baby Slice” look like a future superstar while each loss suddenly deemed him a bust. That’s not an easy road to travel for a fighter but rather than lash out at the apparent overreactions — both good and bad — in regards to his career, Ferguson prefers to look at the attention another way.

“I embrace it,” Ferguson told MMA Fighting ahead of his return at Bellator 253. “I enjoy the spotlight. I know no matter what, it’s going to be a fight. I’m not just going to give up and you’re going to get the win. I’m working hard. I’m just excited to see what’s going to happen. I already have everything I need. It’s all lined up for me. All I have to do is put in the work.

“I don’t have to talk trash to get the eyes on me. I don’t have be some character. I just have to be myself and win and I’ll be all right just because of what my dad did already for me.”

That attitude definitely carries some weight, especially in a sport where skills are sometimes dwarfed by marketability.

Ironically, Ferguson’s father was a massive star in combat sports but Kimbo’s fame was largely built on actions rather than words. He was a hulking specimen, who came to prominence through backyard, bare-knuckle fights where he would sometimes take on a pair of opponents in a matter of minutes.

“Baby Slice” definitely embodies a similar attitude because he never plans on becoming the most prolific trash talker in the sport but given enough time and experience, he promises to earn the spotlight he’s under with better and better performances.

“This is what you’re getting. It’s real, nothing fake. Win or lose, this is who you’re going to get.”

On Thursday, Ferguson will make his first appearance in Bellator just over a year after his last fight.

Since that time, he’s been training alongside fellow prospects A.J. McKee and Joey Davis as part of the Body Shop in California while working under coaches like Antonio McKee. It’s been an eye-opener for Ferguson, who feels like he’s grown leaps and bounds over the last several months with nothing to do but evolve and get better as a fighter.

“It’s been a blessing,” Ferguson said. “I’m different now. I know the hard work. I know how to push myself to that limit where I’m about to pass out. I feel like that spotlight is perfect for me because all I have to do is train and be a great fighter and if I can do that, I could blow up in this sport. Bigger than what I am already. That’s my goal. Keep working hard, proving myself, and just going as far as I can.

“I’m training with these guys and they’re all undefeated and they’re pushing me to just be the best. It’s a team. It’s a team and a gym. No egos. Everything has worked out perfect. I know my opponent isn’t going to have the wrestling of Joey Davis. Nowhere near that. Definitely not going to have the striking of A.J. [McKee]. So all I have to do is keep my composure, do my thing and just be me out there and I’m going to get the victory every time.”

Looking back at the fighter he was four years ago when he debuted, Ferguson doesn’t even recognize that version of himself compared to where he’s at now.

He looks to show off everything he’s learned starting with the fight against Kaheem Murray on Thursday night.

“I definitely don’t recognize that guy at all,” Ferguson said. “If I were to fight that guy again, it would be worse than what it was and that was a dominant win. I’m so much better now. My cardio, my hands, my ground game, my submissions, I’m surprising myself.

“If I’m on my back, I can still do damage on my back. No matter what the position is, it’s going to be a problem. The closer you are to me, the worse it is for you. It’s confidence. I’m not cocky. I’m humble but I’m confident in what I can do now.”