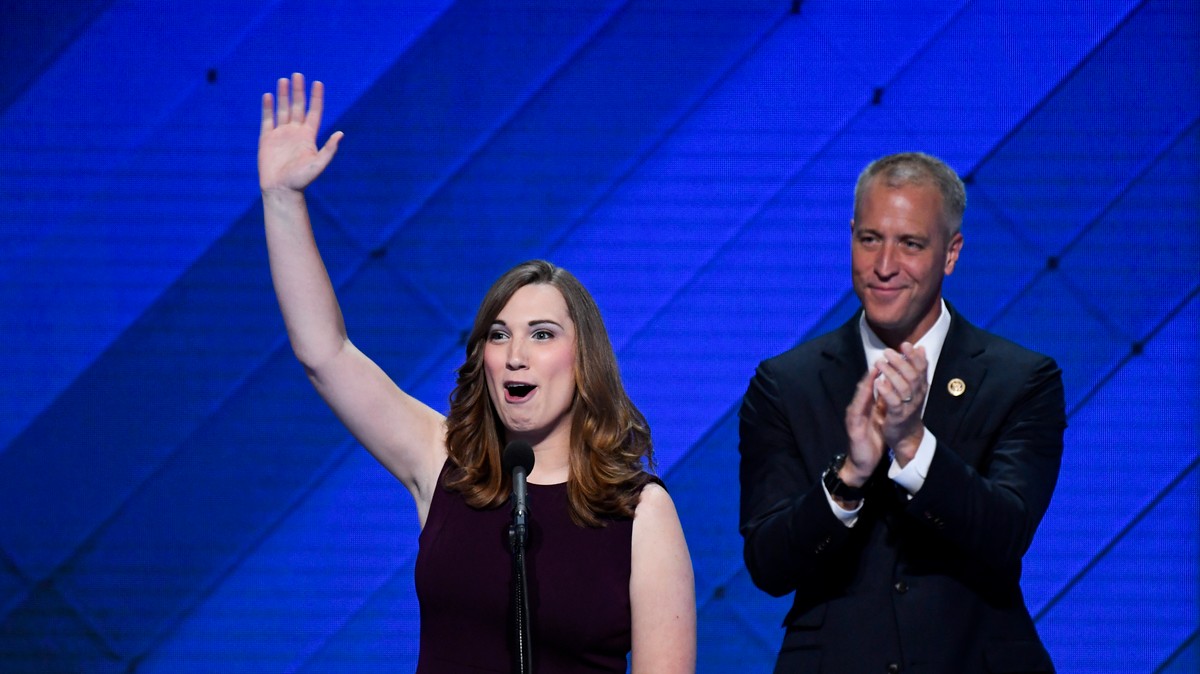 When Sarah McBride was growing up, the idea that she could run for office as an openly transgender person “seemed so impossible that it was almost incomprehensible,” she recalled.

But slowly, that seemed to change. In 2013, her home state of Delaware passed a law banning discrimination based on someone’s gender identity. In 2016, McBride—who’d become the White House’s first trans intern, under the Obama administration in 2012—became the first trans person to speak at the Democratic National Convention. And in 2018, Danica Roem became the first openly trans legislator to be seated in a state legislature.

“All of those life experiences I think demonstrated to me that, increasingly, we can have a seat at the table,” said McBride, who currently works as the national press secretary for the Human Rights Campaign, the country’s largest LGBTQ rights group. “But it requires us to fight for it and work for it. But I increasingly saw that with that effort, we can make sure that more voices are included, including trans voices.”

In September, McBride won a Democratic primary for the Delaware state senate seat in the district where she was born and raised. Thanks to the district’s Democratic tilt, she’s all but certain to win on Tuesday and become the first out trans state senator in the United States.

McBride is one of 21 openly trans candidates now running for state and local office in races across the country, in an election year that saw more than 1,000 LGTBQ people run for office—the most ever, according to LGBTQ Victory Fund, the only national organization devoted to electing LGBTQ people at all levels of government.

And a lot of history could be made on Election Day. Louise Snodgrass could become the first genderqueer state legislator in U.S. history if they win their race for the South Dakota House of Representatives’ 7th District. Texas and Kansas could elect their first trans state legislators, if Madeline Eden and Stephanie Byers win. Elisa Crespo, who’s running for a seat on the New York City Council, could become the first trans person of color elected in New York City. If Evelyn Rios Stafford becomes a justice of the peace for an Arkansas district, she’d also be the first trans person in state history to hold elected office.

“I get a lot of folks who talk about [how] they’re offended by identity politics, but I would say that identity matters,” said Annise Parker, Victory Fund’s president and the former mayor of Houston. Parker was the first out LGTBQ person to serve as mayor of a major American city. “Democracy is stronger, decisions are better, and America is a better place when we’re all included. It is not enough to be LGTB, but it is important that good LGTB leaders have an opportunity to serve.”

Victory Fund hopes that 2020 will see the United States double its number of trans state legislators from four to eight. In 2018, 48 out trans people ran for election; that number dropped this year, to 34, according to LGBTQ Victory Fund. (Not all of those candidates made it through their primaries to Election Day.)

“A cisgender, white, straight man is never asking himself whether or not he should do this thing.”

But at the same time, Victory Fund found, the number of candidates who are genderqueer, non-binary, or gender non-conforming rose dramatically: In 2018, just six ran; in 2020, 25 ran or are running for office.

Taylor Small, a Democratic and Vermont Progressive Party candidate who’s running for a seat in Vermont’s House of Representatives, said that her identity as a trans woman rarely comes up when she’s out on the campaign trail. Instead, voters want to talk about the issues on which she’s built her campaign: fighting for a single-payer healthcare system, defunding law enforcement, improving mental health.

But Small, who’s expected to win one of the two open seats in her district, knows that she’s breaking the mold.

“Here in Vermont and probably across the nation, we see legislative bodies that are typically majority white, majority wealthy, older, cisgender, and straight,” said Small, who serves as the Pride Center of Vermont’s director of health and wellness, where she works of the Vermont health department to confront health disparities facing the LGBTQ community. “A cisgender, white, straight man is never asking himself whether or not he should do this thing. It is the expectation that he can and will. And so for marginalized folks, we always run into that question of, if I can do this thing, am I able to do it? And the answer is: Yes, you are, and your community will be there to support you.”

Both McBride and Small cited Roem, who won a seat in the Virginia General Assembly in 2017, as inspiration. While Roem may be the nation’s highest-profile trans legislator, 28 openly trans people currently serve as elected officials nationwide, mostly in local government, according to Victory Fund.

Although the number of openly trans politicians may be on the rise, trans rights are at risk, and often under attack, at all levels of government. In late March, before the coronavirus pandemic shut down many state legislatures, the ACLU uncovered more than 50 bills aimed at curtailing trans people’s rights, including restricting the ways people can identify themselves on government documents and blocking trans youth from participating in athletics.

At the federal level, the Trump administration has spent years attempting to roll back protections for trans people. Last year, its Department of Justice argued that the Civil Rights Act of 1964 doesn’t protect workers from discrimination based on their sexual orientation or gender identity; the Supreme Court, led by diehard conservative Justice Neil Gorsuch, disagreed.

Outside of the courthouse and the statehouse, at least 33 trans or gender non-conforming people—mostly trans women of color—have been killed this year, according to the Human Rights Campaign. The group, which started documenting this epidemic of violence back in 2013, said that it has never seen this level of death at this point in the year.

While achieving milestones is important, Parker said, it’s not enough to just elect one LGBTQ person—after all, they’re just one vote.

“When we elect one person, it changes the conversation, but it doesn’t change the outcome,” she said of state legislatures. “There’s like a magic number—three tends to turn the tide. It’s not a big number, but we can see measurable differences when you get three members from the LGBT community.”

An activist since the 1970s, Parker said that it’s been decades since she’s seen the level of vitriol now being directed at LGTBQ candidates. The National Republican Congressional Committee, which backs Republican candidates for the U.S. House, released an ad attacking Gina Ortiz Jones, who is lesbian, because, in the words of the ad, she would “divert military money to pay for transgender re-assignment surgeries.”

An attack ad launched against Brianna Titone, a trans Colorado state representative, relied on transphobic stereotypes by claiming that she supports violence and sexualizes children, according to the Denver Post. The ad also used Titone’s “deadname,” or the name Titone used before her transition, the Post reported.

“I think that attacks have actually resulted in an electorate that more fully understands that trans people are people and bring to the table life experience, compassion, energy, humanity that voters want to see in office,” McBride said of government attacks on trans rights. But, she added, “Those attacks, at various levels, have reinforced the old adage that if you’re not at the table, then you’re on the menu.”

McBride recalled when, in 2016, she became the first trans person to address the Democratic National Convention. (She remains a fan of fellow Delawarean former Vice President Joe Biden, for whom she’s served as a surrogate during his presidential campaign.) At the time of her speech, McBride had come out just four years earlier.

“And in that moment, I looked at them and thought that, ‘I hope, Mom and Dad, that you know that, at least for me, it’s gonna be okay.’”