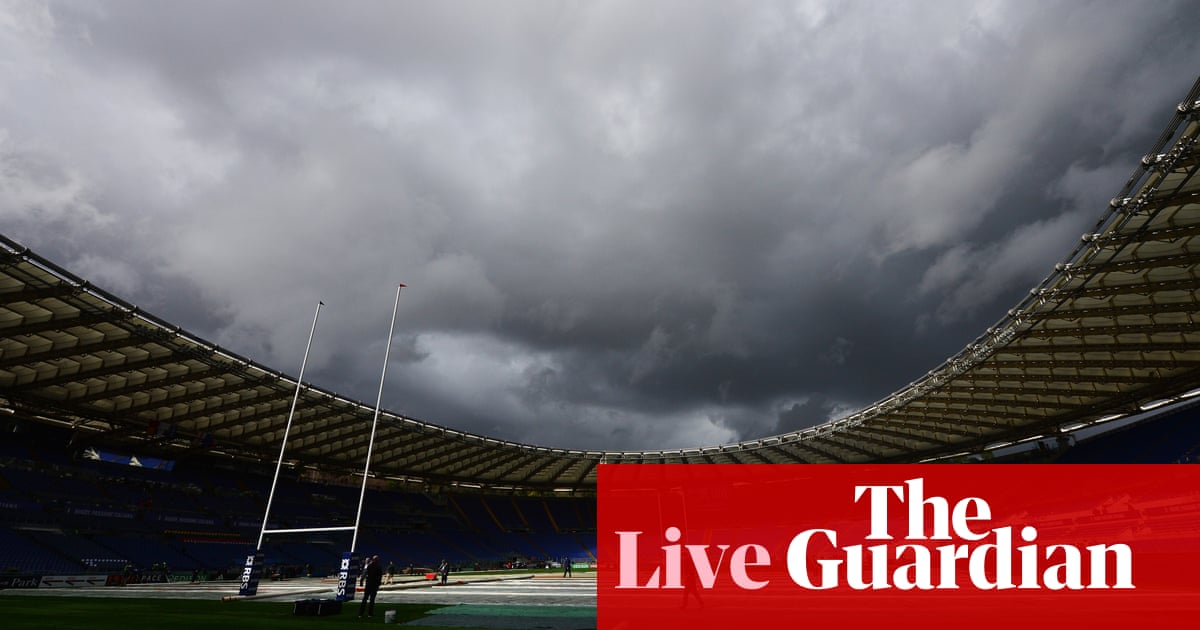 The Italy head coach, Franco Smith, talks to ITV, starting off with a word about the returning Marco Minozi: “He’s full of confidence, he is coming off a very good Premiership, he’s played a lot of rugby compared to some of the other guys, so it’s important for him to bring some of that energy and winning culture …

“We said we’re at the start of the process, with a lot of new young guys coming in … they are in a place to learn against the best in the world today. We definitely want to improve, we want to play our brand, we want to show we can play with the ball, the surface is quick and it’s a good evening. I know they would like to play – and so do we. Hopefully our ball retention will be better.”

Ugo Monye asks the question – if England, Ireland and France are all going to throw caution to the wind today and go all-out for bonus-point wins, why don’t we see that every week?

And here is Gerard Meagher: “To demonstrate how much has changed since England last played nearly eight months ago, they will run out at an empty Stadio Olimpico, barring the 400 or so people working at the venue. The players will be obliged to stand at least one metre apart for the socially distanced national anthems, before which they will be given the opportunity to make an anti-racism gesture. The England squad have been given the personal choice as to whether they wish to take a knee or mark the moment in some other way.”

Time for some pre-match reading. Here is Robert Kitson’s preview of what could be a thrilling finish to this season’s Six Nations:

Our host Mark Pougatch asks Jonny Wilkinson about Eddie Jones’ comments during the week in which he compared fly-halves to sushi chefs.

“You have to go on a journey, and it takes a lot of time and effort,” says Wilkinson. “You come to a place of effortlessness that was there at the beginning … you realise at the end that you had it at the start. You start off grafting, and you end as a ‘genius’ … to see gaps, to maintain your agility, not to become bogged down by it. You see that in the best … it’s a filter, that effortlessness, it’s learning to let go.”

That’s getting pretty deep for the first five minutes of the programme, but I think I can see what he’s getting at.

Jonny Wilkinson, Sir Clive Woodward and Lawrence Dallaglio are in the ITV studio to offer their expertise.

“Eddie Jones sometimes baffles people with his selections,” says Dallaglio. “But he knows how he wants to play a game of rugby and his record speaks for itself … He is successful, it’s got a nice feel about it this side, there are 635 caps out there, and they need that because England haven’t played together for a long time.”

The hosts Italy have made one change from the team that lost in Dublin last week, with Matteo Minozzi coming in at full-back.

For England, the scrum-half Ben Youngs wins his 100th cap. Exeter’s Jonny Hill makes his debut at lock after a stellar domestic season, with his club mate Henry Slade lining up at No 12, in the centre alongside Jonathan Joseph. Owen Farrell is back at No 10.

What we know for sure is that the destiny of the Six Nations championship will be decided tonight. But a number of potential outcomes remain on the table, with England, France and Ireland all in with a chance of lifting the title at the end of this singular campaign.

England are in Rome with a multi-faceted mission: try to set aside all the recent upheaval and the Barbarians shambles, disregard the known unknowns over what may unfold when France host Ireland in Paris tonight, incorporate several new faces into the matchday 23, and defeat Italy as handsomely as possible. Preferably with an attacking bonus point. Easy, right?

Eddie Jones and his side have come a long way since the crushing disappointment of losing the World Cup final to South Africa, just under a year ago. The Saracens salary cap affair would have been enough disruption for any international coach to deal with in any given year: but as that news emerged in January, Covid-19 was already spreading across the globe, and it would not be long before professional sport would be shut down completely. For England, securing the title would be a satisfying way to end a bizarre and demanding year, and the £5m prize money would certainly be welcomed by the RFU, now under serious financial strain just like every other union.

Mathematically speaking at least, if Ireland muster up a bonus-point win against France later, they will be champions regardless and England’s efforts today will be irrelevant. But given the impressive way France dispatched Wales last weekend, that particular outcome seems unlikely. If England win with a bonus point and Ireland fail to beat France, England are champions – unless France get a bonus point themselves and their winning margin is at least two points more than England. It will also come down to points difference if England take a bonus-point win and Ireland do not – but England would need 24 points more than the Irish in their margin of victory.

Simply put, England need to win and win well at the Stadio Olimpico, take a hot shower, and settle down in front of a TV to watch what happens in Paris. Team news, pre-match reading and much more coming up …