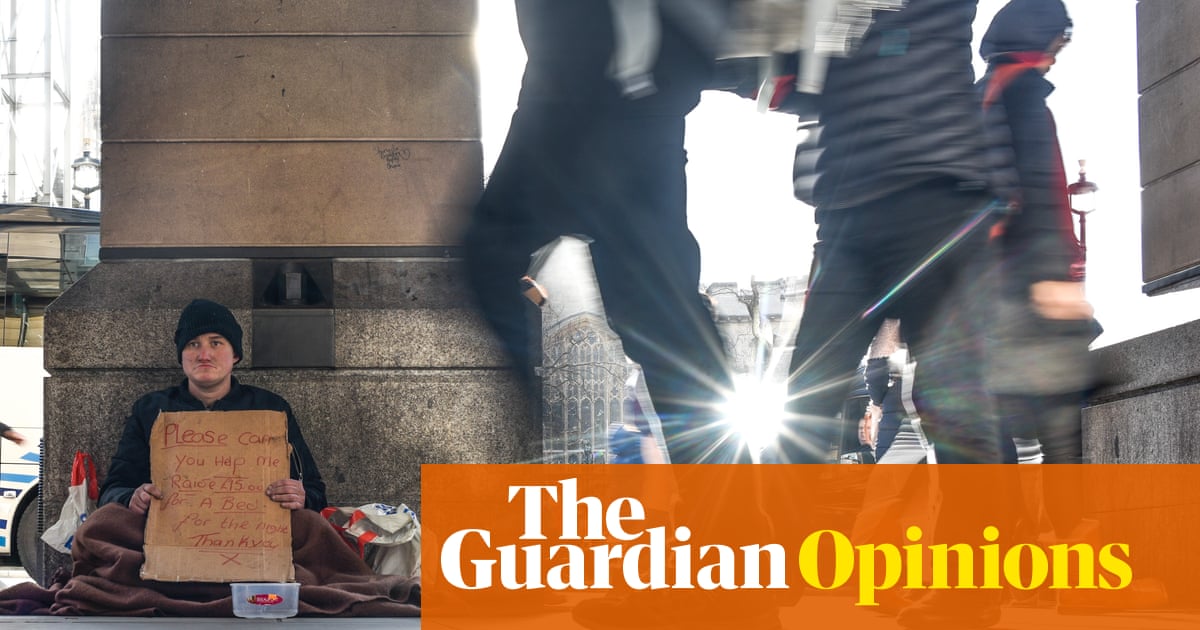 For almost seven years, I worked for Westminster city council to “reduce rough sleeping” – a task that was a lot harder than I had originally anticipated. In my first personal development plan, I wrote, with wide-eyed ambition and perhaps a little naivety, that I intended to end the plight of people living on the streets by 2017. The last annual street count, at the end of November 2019, found 333 people. There’s still some way to go, then.

As the lead commissioner, a self-appointed title and rod for my own back, the council needed me to be many things at once. There are lots of powerful voices in a place such as Westminster, some friendlier than others. Quite a number of MPs live locally; by virtue of geography, they would often have a strong word or two to say to the council about people sleeping on the street. Sometimes, they could be caught out for describing people in the most inhumane of ways.

I attended forums to talk about clearing the streets, reducing anti-social behaviour, putting an end to begging. I’ve been to meetings where I was encouraged to explore the use of discontinued underground stations as shelter, or to create more hostile environments to discourage sleeping and begging. At the same time, I would be writing specifications encouraging charities to focus on the trauma a person had suffered in their lives.

Such conflicting priorities make it impossible to make decisions that benefit people, whether it is the Soho business affected by begging on their doorstep, or the “beggar” themselves, so traumatised by abuse that drug use is their only salvation.

There is a prevailing theory in homelessness services that goes like this: if we can categorise, compartmentalise and identify people, we might be able to fix them. This has led to a system of perverse incentives. In my job, one portion of funding would be reserved for people with a mental health diagnosis who might receive supported housing, but would need to move out and away from where they know when they got better. Another pathway could be for verified rough sleepers. The need to verify that someone had slept rough was such as big issue that I was often faced with a situation where homelessness services had to encourage someone to sleep rough just so they could access a service. And if you haven’t hit rock bottom, we likely can’t help you.

I don’t believe these approaches come from a particularly bad place. They’re attempts to fix an epidemic. But one thing is clear: they don’t work.

Not a week went by in which the latest innovation wasn’t searched for: buses to shelter the homeless; contactless begging to encourage people to give more “wisely”; homeless barbers; homeless vets; homeless GPs; homeless bank accounts for people without a permanent address. All are worthy innovations aimed at correcting a failed system. But should we not be focusing that energy on fixing the system that makes our work necessary in the first place?

We’ve forced individuals to internalise these failures as their own. You’ve got no money because because your benefits don’t stretch and the guy in the hostel room next door followed you to the cashpoint and robbed you? I’ve got a great homeless budgeting class you should go to, and if you don’t attend I’m afraid you’re a “non-engager”, but don’t worry, we have a hostel for people like you.

We place the onus on individuals to fix themselves, and when they invariably fail in the process, we blame them, rather than the system that produces such problems in the first place.

In other words, we’re constantly trying to solve the wrong thing. I’m a very proud dad to two little boys, the eldest of whom has just turned four. For months now he has been annoying his parents by coming into our bed in the early hours and falling asleep with us. We’ve tried numerous things to fix the problem: incentives to stay in his room, education about why it is good to stay where he is, boundaries and acceptable behaviour agreements. It wasn’t until I stayed in his room one night that I realised the real reason he was coming into ours: he wasn’t scared or in need (vulnerable, you might say) – it was just warmer in our room than his. So I fixed the heating system in his room, and now he doesn’t come in.

Since I have left the local authority, I can take a longer view of homelessness and how we can solve it. It’s clearer than ever that we need to refocus our aspiration and our mission. We shouldn’t be working as a sector of homelessness charities to end homelessness. The problem is far deeper. We need to dismantle the current system that deals with homelessness, and the way in which people are filtered through it.

If we can work together to identify broken power dynamics and walk alongside people to understand what they can do, not what they can’t do, then there is hope. We need to make decisions with people, led by them, not centred on them. We need to treat them as assets, not burdens, and give people back control of their own lives.

The pandemic has taught us that we are a nation of people who don’t like to be managed. Yet if you don’t have a place to call home, we will create a system that will manage every element of your life, from where you can charge your phone to what you can have to eat. And you’d better be thankful for it.