At the entrance to Taipei’s Pride march on Saturday, Pearl Jain and Lance Xie held up a sign offering free hugs. Similar placards were waved above the pulsating crowd of 100,000 sweaty and bedazzled party goers crushedalong the parade route.

Xie had recently returned from Melbourne, where 5 million people have just emerged from one of the toughest lockdowns in the world and everyone is trying not to touch each other. It was good to be home.

Jain said: “It’s nice to have the chance to hug people here because everywhere else is in lockdown and that’s just so sad.” 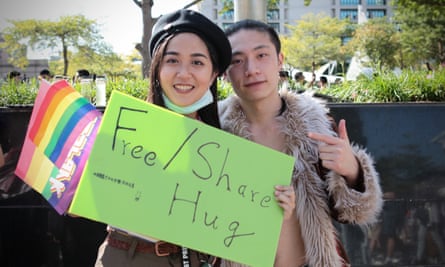 People in Taiwan are still taking precautions – mandatory masks on public transport, digital registration for some events, isolation for people with symptoms – but Jain said life in Taipei had barely changed in 2020. “We’re doing really great, our government and people here are just trying to protect ourselves,” she said.

Saturday was Taiwan’s 202nd consecutive day without a single locally transmitted case, and for the tens of thousands out celebrating the LGBTQ+ community, Covid feels like a distant memory.

Amid a global downturn, Taiwan’s GDP is predicted to grow by more than 1.5% this year. In the third quarter it grew by 3.3% – the fastest since 2018. The only other government claiming growth is China, which considers Taiwan to be a breakaway province that it must take back – by force or otherwise.

Even though people are quite divided on political issues, when we face a common threat people want to work together

“In Taiwan, even though people are quite divided on political issues, when we face a common threat, people want to come together and work together,” Yawen Cheng, professor of health policy at the National Taiwan University, told the Observer.

After the 2004 Sars epidemic killed 73 of its people, Taiwan strengthened and centralised its disease control framework and pandemic preparations, and started annual drills. Taiwan also learned from that epidemic that it couldn’t rely on bodies like the World Health Organization (WHO) for timely information, because China had ensured the country’s exclusion from global briefings and emergency meetings.

“We couldn’t get direct information from international organisations,” said Cheng. “Taiwan has always been careful about what happens in mainland China, so the Central Epidemic Command Centre (CECC) of Taiwan tried to get information from informal channels.”

When Taiwan’s authorities received a social media message in late December warning of a strange pneumonia outbreak in Wuhan, they acted almost immediately, screening flights from the Chinese city before enacting entry bans, which were eventually extended to all foreigners by March. Strict border controls are still in place, and around 340,000 people have gone through the mandated quarantine for new arrivals, monitored by the CECC and police, and tracked by mobile phones.

The government also banned mask exports while it stockpiled and then rationed them out to residents as local production increased tenfold. The health system was scaled up and new technologies developed to monitor, track and trace potential cases, and to support people with grocery deliveries and counselling.

Audrey Tang, Taiwan’s digital minister, said the most important technologies in the Covid response were masks and soap, but technology played an “assistive role”. This included the development of a mask availability map using pharmacy supply and sales data, and “digital fencing” – using phone tracking to allow people to quarantine at home. When a signal leaves the property or drops out, a call is made to the police. 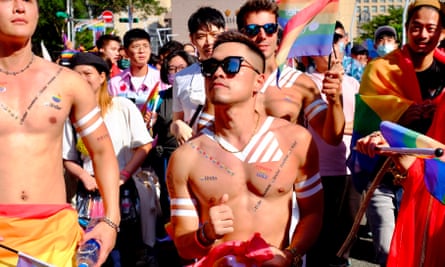 The measures “piggyback” on existing technology – such as mobile phone mast triangulation and SMS warning systems for earthquakes – to alert people to infection risks nearby, said Tang, a former civic hacker and well-known advocate of open democracy. They don’t collect any data they weren’t collecting pre-pandemic, Tang added.

Other countries have balked at proposals far less intrusive than those that Taiwanese people accept. Cheng said there had been a lot of discussion about whether the state had gone too far but acknowledged that it had been responsive to concerns.

In a policy study published in October, Cheng and her co-author suggested the Taiwanese government’s landslide election win in January gave it the political capital to maximise its response, and perhaps even to overreact. “I think social trust is the key to the success of Taiwan’s virus control,” she said. “It’s an interactive process. The government has done a lot to make the information more public and open, and so in turn the public trust the government’s actions.”

Taiwanese society was not unchanged by the pandemic. While Taiwan’s tech exports rose in a world full of people stuck at home with their devices, the local economy suffered. The Taiwanese government has passed financial measures worth billions of pounds.

“That rebuilt the habits of spending outside of one’s home, and rebuilt the economy based on face-to-face transactions, like night markets,” Tang said.

Now, Taipei’s shops and markets are heaving. People browse, busk and greet each other with handshakes and hugs. It feels normal.

Tang said the government’s willingness to listen to expertise outside its inner circle was key. It helped that the vice president at the time of the outbreak was Chen Chien-jen, an epidemiologist, but there was also “a larger culture that says we trust the wisdom at the edges and the frontline”.

Back at the parade, the afternoon sun bounced off the blue sequins of Diva Wei’s ballgown as she and Daniel Lin waited to start marching, something they were conscious was open to few others around the world.

“I feel this is the marvellous outcome of our government’s policy and the collaboration from society,” said Lin. “It’s so great.”