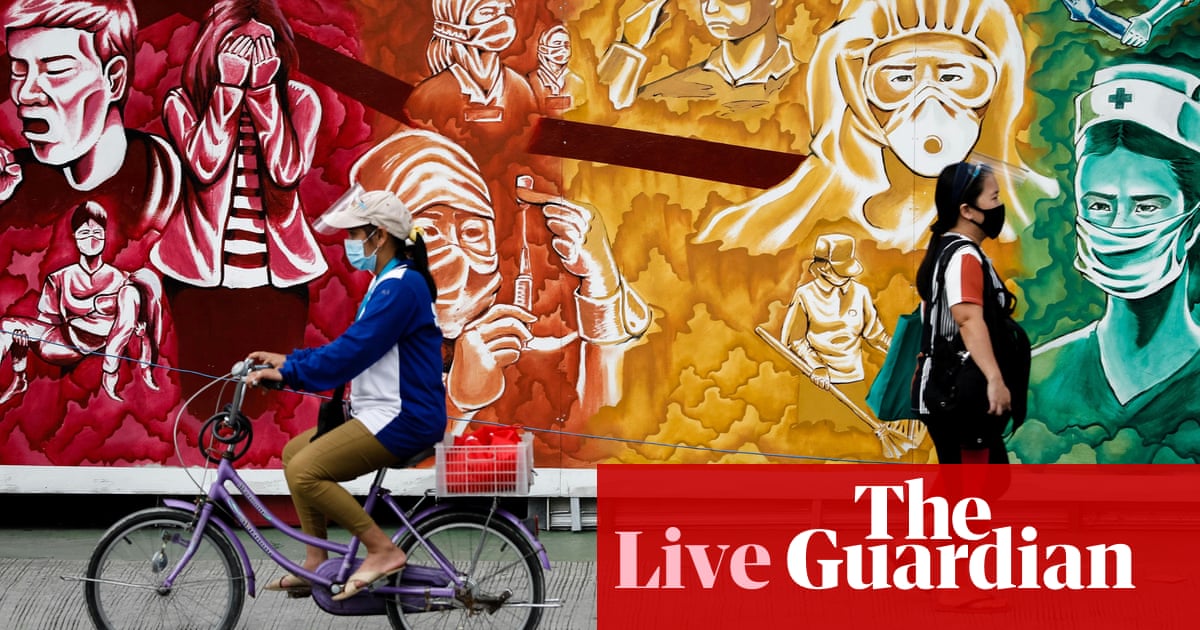 Health officials in Australian state of Victoria have said the one new case recorded overnight was a hospital patient who had previously tested negative several times.

The chief health officer, Brett Sutton, described the case as a “low positive”.

Sutton said it was understandable some Victorians were still anxious about leaving their homes, as Melbourne enters its first weekend since one of the world’s longest lockdowns finally ended.

I will say we deserve to enjoy ourselves now. We got to this incredible point where case numbers are very low and we have days of literally no true cases so we should go out, with all the precautions we talked about. But we need to enjoy our lives after three months of really constrained activity.

The press conference is being led by the health minister, Martin Foley, in the first briefing without the premier, Daniel Andrews, in 120 consecutive days.

Residents in the Australian city of Melbourne are easing in to their first weekend since the end of one of the world’s longest lockdowns.

Victoria recorded one new case over the past 24 hours, although authorities described the infection as a “low positive”.

Eased restrictions for the city of 5 million mean locals can now dine at cafes and restaurants, or grab a drink at bars and pubs.

However, strict patron limits remain in place and venues have been encouraged to seat customers outside.

Retailers are also open once again, and residents may now invite two adults from the same household into their homes.

The restrictions were eased on Wednesday, with some venues opening their doors to customers from just past the stroke of midnight.

Australia’s political fight over Covid-19 border closures is continuing despite moves from some states to ease their restrictions.

Facing pressure from other states and industry, the premiers of Western Australia and Queensland have now both announced they would relax tough border rules preventing residents of other states entering in the coming days.

But business and political leaders have hit out at Queensland’s decision to continue a hard border with the greater Sydney area, despite minimal community transmission in the city.

“Keeping the doors bolted to places you can’t reasonably call hotspots makes no sense from a health perspective and it’s doing a lot of social and economic damage as well,” he said.

All states continue to keep their borders closed to Victoria, where authorities have just confirmed one new case was recorded in the past 24 hours.

The 14-day rolling average in Melbourne, which just came out of one of the world’s longest lockdowns, is now 2.4. There are only two cases that haven’t been linked to a known outbreak over the past two weeks.

Queensland will reopen to regional NSW from Tuesday, while Western Australia has confirmed it will ease hard border restrictions for all states on 14 November.

Europe has listed more than 10 million cases to date since the virus first appeared according to latest health authority data analysed by AFP.

In terms of cases, the continent lags Latin America and the Caribbean (11.2 million) and Asia (10.5 million).

The United Kingdom government is expected to announce a national lockdown across England next week.

The Guardian has been told the prime minister, Boris Johnson, has bowed to pressure from his scientific advisers for new national lockdown restrictions.

They are expected to be announced early next week.

Sir Patrick Vallance and Prof Chris Whitty, who head the Scientific Advisory Group for Emergencies (Sage), are understood to have warned the prime minister that the time has come for national action across England.

Sage scientists presented Johnson with evidence at a meeting in Downing Street, where they explained that Covid-19 is spreading significantly faster than their worst-case scenarios.

My name is Luke Henriques-Gomes and I’ll be with you for the next few hours.

Europe has passed a total of 10m cases, with nearly a quarter of a million cases being diagnosed each day, compared with around 15,000 at the start of July. France has begun a month-long lockdown, Belgium will adopt tighter restrictions from Monday, clashes in Barcelona erupted over Spanish Covid restrictions and England is expected to announce a national lockdown next week.

In Australia, Victoria – which this week emerged from one of the world’s longest lockdowns in the state’s capital, Melbourne – has recorded just one case and no new deaths. Neighbouring New South Wales has recorded four new cases, three of them in hotel quarantine. It comes amid an ongoing row over borders remaining shut in some states.

The other main developments include: