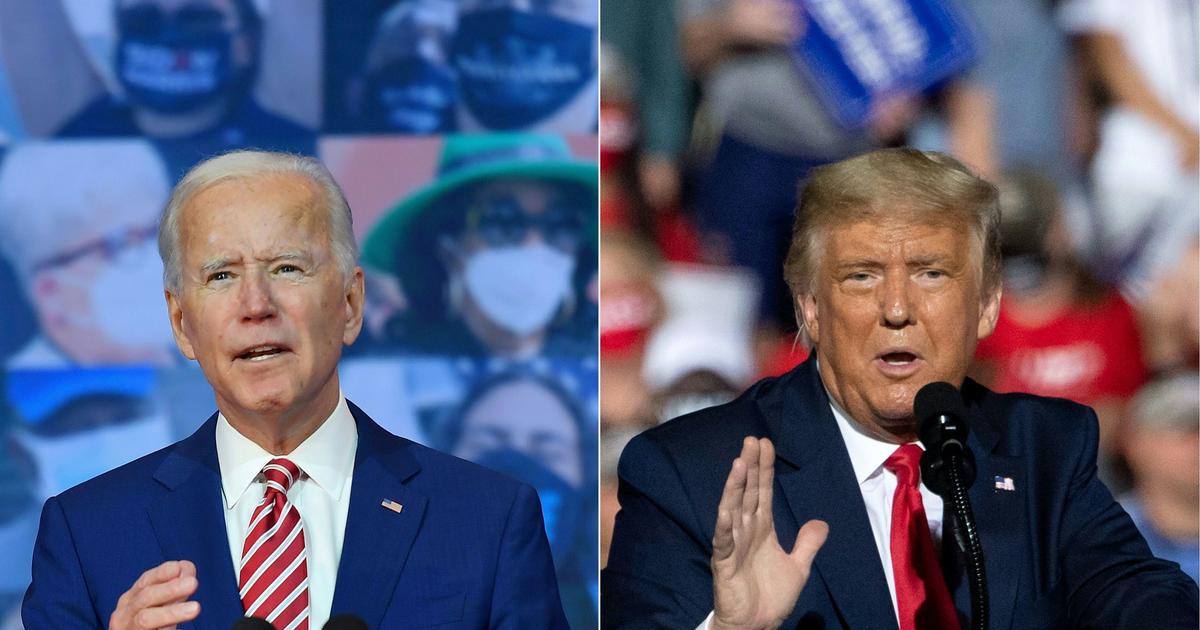 Control of House and Senate at stake in 2020 election

While much national attention has been focused on the heated presidential race between President Trump and former Vice President Joe Biden, control of the House and Senate are also on the ballot.

He also offered endorsements for Jim O’Neill to be attorney general of North Carolina and Jim Justice to be reelected as governor of West Virginia.

A look at NBA arenas transformed into voting centers

Over two dozen NBA arenas and stadiums across the country have opened up to voters this election, thanks to superstar LeBron James and his fellow NBA players.

During the racial unrest that gripped the summer, NBA players halted the playoffs to demand action on systemic racism. One of their goals was to increase access to voting locations amid the pandemic.

Caitlin Huey-Burns takes a look at the experience – Watch her report here:

Although many states can’t begin counting mail-in ballots until Election Day, that is not the case in the critical swing state of Arizona. 60 Minutes cameras show the process by which much of Arizona’s mail-in vote is already processed and counted, with the ballot counts stored in a secure server not connected to the internet.

John Dickerson’s report shows a traditionally Republican state in political flux whose presidential pick might be among the first swing states to be called and might be a new bellwether. It will be broadcast on 60 Minutes, Sunday, November 1 at 7 p.m. ET/PT on CBS.

Arizona started counting and tabulating a record number of early votes on October 20 – 14 days before the election. It will be ahead of the pack, says the state’s chief election officer and Arizona Secretary of State Katie Hobbs. “

That’s a huge advantage, particularly over states that are seeing a huge increase in the volume of voting by mail and statutorily aren’t able to start processing ballots until that day. We’re certainly going to be ahead of them.”

Former President Barack Obama will campaign on behalf of Joe Biden in Florida and Georgia on Election Day, the Biden campaign announced.

Biden and Obama to campaign together for first time

Democratic presidential nominee Joe Biden is appearing with his former boss, former President Barack Obama, in two drive-in rallies in Michigan on Saturday as his campaign makes its final appeal to Black voters ahead of Election Day. This marks the first time Obama and Biden are campaigning together in the 2020 election.

Biden and Mr. Obama will appear together at a rally in Flint in the early afternoon, followed by an event in Detroit later in the day. Musician Stevie Wonder will perform at the event in Detroit.

In 2016, the counties that include Flint and Detroit saw a significant drop in turnout, MI Live reported. The overall Black voter turnout that year decreased for the first time in 20 years, according to the Pew Research Center.

You can watch the rally in Flint at 1:45 p.m. ET on CBSN in the player below:

Democrats remain ahead in party registration in several states

In Nevada, there is a huge difference in in-person turnout versus by mail. Republicans are 16 percentage points ahead of Democrats in in-person voting totals, but fall behind Democrats by 23 points in mail returns.

In Georgia, women are far outpacing men in the early vote. The counties with highest turnout are also mostly rural and very white in areas where Mr. Trump overwhelmingly defeated Hillary Clinton in 2016.

In Florida, county trends are similar to Georgia’s, but with one big exception. The counties voting most often were not just 2016 Trump strongholds, but are counties with decent sized electorates. The state sometimes referred to as “God’s waiting room” is also bringing out the grey vote, with significant early turnout within the state’s oldest counties.

Ruth Bader Ginsburg’s granddaughter appears in an ad from We Demand Justice and Move On encouraging Americans to vote.

“Her final wish was that her seat on the Supreme Court not be filled until after the election,” Ginsburg’s granddaughter Clara Spera says in the ad. “It’s up to us to make her voice heard at the ballot box. To keep fighting the battle she waged for women’s equality and justice for all. My grandmother changed the course of history. Now it’s our turn. Vote by Tuesday.”

Kamala Harris finished her day of campaigning on Friday in Texas at the University of Houston, where she appeared with Beyonce’s mother, Tina Knowles-Lawson. “If we win Texas, it’s game over,” Knowles-Lawson said.

Harris told the crowd that George Floyd’s family was in attendance. A campaign aide confirmed to CBS News that Harris met with three of Floyd’s cousins who live in the Houston area.