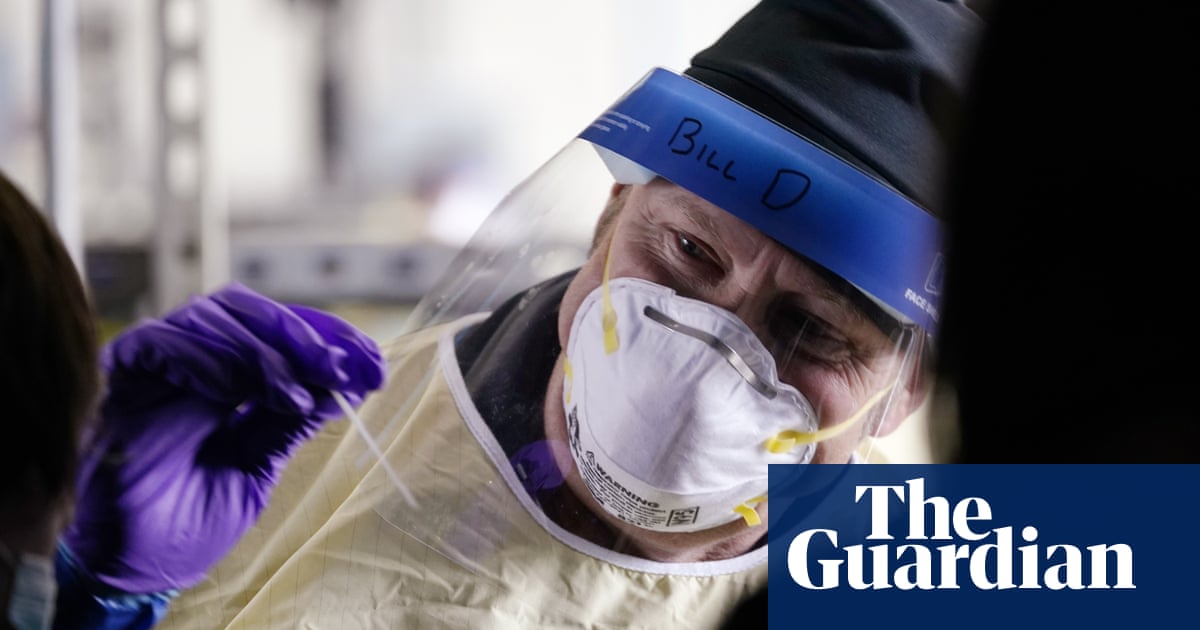 The US has shattered the daily coronavirus record, with almost 90,000 new infections reported on Thursday and close to 1,000 deaths, as the US approached a world-topping 9m cases and experts warned of death rates more than doubling by mid-January.

The sobering data and scientific outlook show a pandemic veering further out of control in America even as the president and his son hammered a public message dismissing the grim realities.

According to figures from Johns Hopkins University of Medicine, the US had a total of more than 8.9 million cases on Friday, and was expected to soon cross the nine million mark. So far 228,677 people have died, the most in the world by a significant margin.

The USrecorded its highest one-day total of new coronavirus infections of the pandemic, with 88,521 new cases reported on Thursday – a rise of 9,540 on the previous day. The death toll for the 24-hour period was 971.

Hospitalisations are soaring in all but 11 states, according to the Covid Tracking Project, with more than 46,000 people in hospital on Thursday and a number of state setting up overflow field hospitals and governors sending military helpers.

His eldest son, Donald Trump Jr, said in an interview on Fox that deaths were “almost nothing.”

But experts warned that conditions are likely to worsen sharply going into winter and predicted that death rates could more than double by mid-January.

The Institute for Health Metrics and Evaluation at the University School of Medicine said in its latest forecast that the death toll could hit 514,000 by the middle of January and added it was most likely that by that time 2,250 Americans will be dying every day from Covid-19, more than twice the current rate.

“The fall/winter surge should lead to a daily death toll that is approximately three times higher than now by mid-January. Hospital systems, particularly ICUs, are expected to be under extreme stress in December and January in 18 states,” it said.

The president continued to insist that the country is “rounding the turn”, arguing against taking stricter measures to combat the pandemic and told a campaign rally on Saturday “you don’t see death”.

“This is the hardest point in this pandemic right now – the next two months,” Scott Gottlieb, former commissioner of the US Food and Drug Administration (FDA), told CNN.

But with the election just days away, cases are soaring in every competitive state. In 13 potential swing states the weekly average of news cases has risen 45% in the last fortnight and Iowa, Michigan, Minnesota and Pennsylvania have recently reached new weekly average highs.

In Utah, Gary Herbert, the governor, said hospitals “cannot keep up” with the infection rate. He tweeted: “You deserve to understand the dire situation we face.” And warned that the state could face a similar fate to parts of Italy back in March or New York, where New York City became the world hotspot in the early spring.

Wisconsin, where Trump has been campaigning repeatedly in recent weeks despite local elected officials and doctors begging him not to, as crowds turn up, jostling and not wearing masks, and where he was due to hold another rally on Friday afternoon.

“There is no way to sugarcoat it: We are facing an urgent crisis, and there is an imminent risk to you, your family members, your friends, your neighbors,” said Wisconsin’s governor, Tony Evers.

At a drive-in rally in Florida on Thursday, the Democratic presidential candidate, Joe Biden, said Trump “has given up” on tackling coronavirus.

“He is doing nothing. We’re learning to die with it and Donald Trump has waved the white flag, abandoned our families and surrendered to the virus,” he added. “But the American people don’t give up, we don’t give in and we surely don’t cower, and nor will I under any circumstances.”

The country reported a record of more than 500,000 new coronavirus cases in the past week.

Half of US counties saw new cases peak during the past month. Almost a third saw a record in the past week.

Reported deaths can lag case numbers by weeks. But already deaths are increasing in about half of states.

In the past month, about a third of US counties hit a daily record of more deaths than any other time during the pandemic, the New York Times reported.