In 2019, Oli Sykes foretold “some fuckin’ mental disaster in a couple of years … We’re literally at the end, doesn’t it feel like that to you?” He imagined a tsunami or volcano.

His words are from Underground Big, a 24-minute track by his band Bring Me the Horizon, and the first of two prophecies from this Cassandra of stadium rock. He got closer the second time with Parasite Eve, a song about a pandemic. “I had read about this superbug in Japan that was killing loads of people, and the article was saying this is the next war mankind will face,” he says now. “I didn’t think it was going to come this year.”

As Covid-19 took hold and people started dying, the band shelved their unreleased song. “I’d been treating it like a video game, a fantasy – and someone was going to hear this and they’d just lost their grandad or mum,” Sykes says. But the band thought again: “There’s probably all these people who need a cathartic experience. There’s no one writing songs about this – and we’ve got one. It’s going to help people process how dark stuff is at the moment. And that’s what rock music is all about.”

Parasite Eve was released in June and became the first great piece of art about the pandemic. Full of theatrical flourishes such as sirens, sneezes and dispassionate cyborg-overlord voices, its volatility – swinging from whispers to giant chords – is evocative of the chaos that has defined 2020. Sykes castigates “all the king’s sources and all the king’s friends” who “don’t know their arses from their pathogens” and asks: “When we forget the infection / Will we remember the lesson?”

The song is included on Bring Me the Horizon’s new EP Post Human: Survival Horror, which features brilliant apocalyptic pop with boyband-style melodies. Seven of the nine tracks were made entirely during, and are often about, lockdown; the new single Teardrops, on which Sykes yells “Oh God, everything is so fucked!” with exasperated terror, was inspired by rolling news during the pandemic, “how we allow ourselves to be traumatised by it every day, and it’s addictive”.

Band members isolated from one another and collaborated over Zoom and FaceTime. It makes sense, practically and aesthetically, for their “cyberpunk metal” to be built with software. “Our last album, Amo, we must have spent hundreds of thousands making that, and we’ve made this new one for nothing,” says Sykes.

That 2018 album was their sixth since forming in Sheffield in 2004, and gave them their first UK No 1 and two Grammy nominations. Its slick pop was a long way from their roots, back when Sykes would demonically roar over fiddly riffs and stop-start rhythms. His passage through hoarse choruses to pop tunefulness reflects his own progress through a hellish childhood, addictions and divorce.

We talk through it all in the vegan bar he owns in Sheffield, under the offices of his clothing company, Drop Dead. Tattoos cover his arms and creep around his face, as if he is only just keeping them at bay. Now 33, he grew up in Stocksbridge, a small South Yorkshire town between Sheffield and Huddersfield. “I was the school punching bag,” he says. “Literally. The end of year 11 prank every year was to beat the shit out of me. It would stem from one kid beating me up, to everyone … [it was] implanted into me that’s what everyone was going to do to me, going through life.” 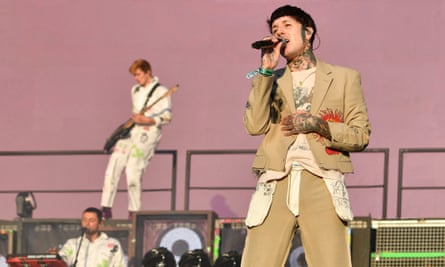 The disaffection was grist for his new band, who built a devoted following across their first three albums. Unbeknown to those fans, Sykes was suffering from undiagnosed ADHD and developed an addiction to ketamine. He poured the experience into the band’s 2013 major-label breakthrough Sempiternal, telling an awards ceremony audience the following year: “When I got out of rehab I didn’t want to scream any more, I wanted to sing from the fucking rooftops.”

His voice strengthened further on 2016’s anthemic That’s the Spirit, which just missed out on the No 1 spot (“We were so gutted, heads in our drinks, like: bloody Stereophonics”), but the album spent a year in the charts and took them to Wembley Arena. Sykes, however, was soon confronting a new trauma: his first wife cheated on him. She later accused Sykes of his own infidelities, and of slapping and spitting on her.

He denies it all. “I said: ‘I love you, but I can’t do this any more.’ I kept my cool so much … for her to come out and paint me as an abusive person, it was unbelievable.” But, he says: “I’ve been in relationships where I’ve cheated on the other person – I ain’t always been a saint. And [his ex-wife] was going through a really hard time when it happened, so there was always more worry about her than hatred. The night I found out was such a dark time. That outweighed my anger, the safety of this person.” 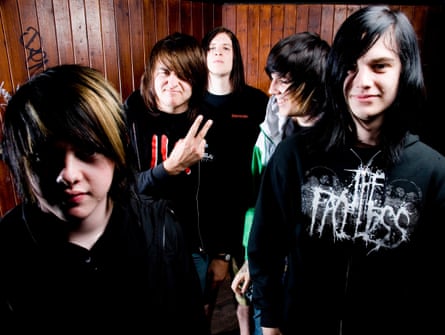 Pop-metal gurus: Bring Me the Horizon back in 2006. Photograph: Naki/Redferns

Amo, made after that painful breakup, was for the most part surprisingly relaxed. “Spitting over heavy guitars would have seemed like I wished her bad, but I don’t,” says Sykes. He had also met his second wife, Alissa Salls. “We never argue. It’s very loving, compassionate, open and trusting. People stay in abusive relationships, whether it’s emotional or physical, because they think: ‘That’s love, love’s tough.’ But that fairytale, perfect, idealistic thing, it’s not fantasy: you’ve just got to find the right people.”

A more secure Sykes continued writing optimistic songs, but then, as lockdown began, he experienced a resurgence of the anxieties he had developed at school. “My normality was playing shows to thousands of people. That world had kept the darkness at bay. When all that went, I felt a little bit worthless.” He had his first ever therapy sessions, and his therapist linked Sykes’s playground trauma to his “tendency to believe that everyone thinks the worst of me. Next time I start thinking negatively, I’m like: wait a minute, your brain does this automatically.”

Nevertheless, as the world got heavier, so did the band’s music. “To start with, I was like: ‘I get to wear pyjamas every day, sick,’” Sykes says. “But after a while things like that start to make you feel subhuman. You’re sat there playing Monopoly when there’s people dying.” The EP’s opener, Dear Diary, is a hardcore punk rager about this predicament, with the chorus “The sky is falling / It’s fucking boring”. And there’s a line in Parasite Eve, “life is a prison and death is a door”, that Sykes says is about being unable to go outside during the pandemic. But could this send the wrong message to vulnerable listeners? “You always run that risk when you’re writing the kind of stuff I’m writing,” he says. “Where does my art stop in terms of the safety of everyone? It’s not something I take lightheartedly. It’s not romanticising or glorifying it … this is how this particular thing makes me feel.”

Bring Me the Horizon’s synthetic sound evokes a suffocating digital existence; Sykes says he has developed an addiction to his phone in lockdown. And the roaring vocals are back, but where his anger was once about himself, now it is about everything else. “With this record, there’s something to scream about,” he continues. “I feel angry … I got shit for the way I used to dress, but I always had the freedom to do that. Whereas there’s still people who are persecuted every day for the way they were born, whether it’s the colour of their skin or their sexual preference.”

Sykes was already fairly jaded about politics and society. He didn’t vote in the last election, saying Jeremy Corbyn “was walking on eggshells, toeing that line between what he really wanted to do and what he was saying” – but he had an underlying faith in the British government. “Like, they might not always have made the right decisions, but they’re not inherently evil, whereas I used to get that feeling from America. Every man for himself, that’s the American dream, whereas in England it felt like there was more camaraderie.” But, he says, in something like Jeffrey Epstein and Prince Andrew’s friendship, “you start to see this corruption seeping through”. He wonders, “With lockdown, are they really genuinely trying to do the best for us? Travel corridors, for example: is that them going: give us a good Brexit deal? It’s just harder to see them as an unconditionally caring government now.” 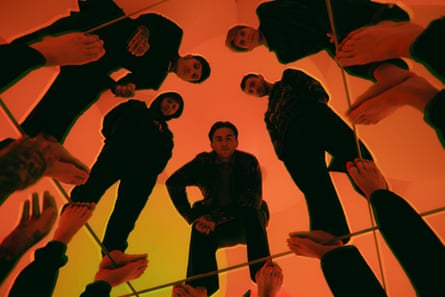 The victims of a decade of austerity might wonder what took him so long. Sykes says he has been “arrogant and complacent” about his political engagement in the past: “Before this, I’d used my veganism as, ‘Well, I do my bit for the world.’” He castigates the lack of faith in science during the climate crisis. “I am a little bit pessimistic. But what I hope is – well, not hope, because this sounds grim – but something really bad is going to happen. Where we’re not wiped out, but it’s enough to come back from. Because that’s the only way people are going to see.”

We need something even worse than coronavirus? “Unfortunately, for humankind to wake up. We have to evolve out of divide and conquer … We don’t like to have our realities shattered, or even bent. But you need to keep your brain soft and malleable.”

He uses the Black Lives Matter movement as an example. “Your first impulse when someone says you’re racist is to say: ‘No, I’m fucking not.’ But if you listen and take your ego out of the equation … because you don’t know all the ways systems are built. It’s the same with everything in life.”

After years of personal chaos, then, Sykes is having an equally messy political awakening. “Whether it’s love or government, you’ve got to demand better,” he says, starting to separate the signal from the noise.