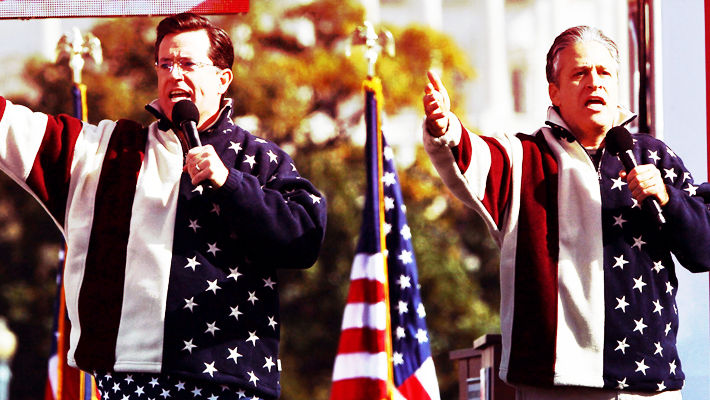 Nostalgia has a way of fooling us into believing that times were better in the past. (This is especially true in 2020, when “better” has a historically low bar.) But the past hardly ever is actually better, it just seems that way because people back then couldn’t fully grasp the reality of what was going on around them. We don’t miss the way the world actually was. We just feel wistful over the naïveté and ignorance we lost.

I was reminded of this truism when I revisited The Rally To Restore Sanity And/Or Fear, which occurred 10 years ago this week. In 2010, more than 200,000 people converged on Washington D.C. to protest … protesting? I mean, I guess that was the point?

Even now, a decade later, it’s hard to suss out a coherent message to this “satirical” political rally hosted by the era’s two biggest Comedy Central stars, Jon Stewart and Stephen Colbert. The original idea was to poke fun at Glenn Beck’s Restoring Honor rally, which occurred two months earlier and harnessed the anger of the Obama-hating Tea Party movement. But it was also about liberals learning to respect their right-wing counterparts, while simultaneously chiding them for being batcrap insane. Though this mockery was ultimately civil, because it’s the media’s fault that Americans of differing political persuasions hate each other. Except, come on, why are you looking for a message here anyway? This was a comedy show! Other than the part at the end, which sounded an awful lot like a political speech, when Stewart asked for a moment of “sincerity” and once again blasted the media for propagating the “false” narrative about the deep divisions that exist in this country. Oh, you mean like fake news? I’m reminded of a guy who agrees that reporters overstate negativity in order to tear at the fabric of this country, though his name escapes me now.

Seen from the vantage point of 2020, a left-leaning faux-protest premised on the idea that political anger in response to societal ills is inherently irrational and based solely on fear — as opposed to being a natural reaction to the circumstances of your own life — seems pretty … well, let’s just say it hasn’t aged all that well. Though it should be noted that plenty of commentators felt that way in the moment. David Carr dinged Stewart and Colbert in the New York Times for viewing politics strictly through the lens of cable news, even though the vast majority of Americans (even in 2010) don’t watch it. Janet Malcolm, writing for The New York Review Of Books, mocked the vanity of attendees patting themselves on the backs for their centrist reasonableness, dubbed the rally “a giant preen-in.” Even Bill Maher, a fellow comrade in the political comedy world, chided Stewart and Colbert for wasting an opportunity to galvanize the left at a time when Obama was politically vulnerable. “If you’re going to have a rally where hundreds of thousands of people show up,” he mused, “you might as well make it about something.”

Looking back, some have seized upon The Rally To Restore Sanity And/Or Fear — and the impotent both-sides-ism it signifies — as a symbol of “liberal futility” in the face of conservatives seizing control of state and local governments and the courts. While lefties were feeling good about their own decency, the other side was mobilizing. This, also, was apparent in the moment: The week after the rally, Republicans trounced Democrats in the midterm elections, winning seven seats in the Senate and 63 seats in the House Of Representatives, a historic shift in Congressional power not seen in more than 60 years. While the Comedy Central rally outdrew the Tea Party rally, Glenn Beck laughed last.

Was it Stewart and Colbert’s responsibility to get out the vote in 2010? Not really. These are — as we must reiterate for the umpteenth time — comedians, not politicians. But if you assess The Rally To Restore To Sanity And/Or Fear strictly as a comedy show, it hardly fares any better. I’m telling you: This thing was hella boring.

You can watch all three hours on YouTube. Though I recommend skipping the first hour, at least if you’re looking for laughs. There was a pretty good musical performance by The Roots and John Legend, and then — perhaps in a sign of basic-cable unity — the Mythbusters came out for an interminable stretch of crowd work. Finally, after about an hour, Stewart emerged to introduce the vocal group 4Troops for a syrupy rendition of The National Anthem. Then he earnestly urged the crowd to pick up their litter and clean the Washington Mall once the rally is over.

These optics will be familiar to anyone who has followed Stewart and Colbert — both of them favor old-fashioned nods to God and country as a way to demonstrating to skeptical right-wingers that liberals are “real” Americans just like them. Only these gestures never really work. If you can accuse Joe Biden of being a socialist, you are pretty much incapable of accepting that any leftie can be patriotic. (Liberal millennials and zoomers have learned that you might as well push actual socialist policies that could potentially transform the country if you’re going to be painted with that brush no matter what.)

Stewart and Colbert, meanwhile, signify the sort of respectability politics in relation to the right that was endemic to the early Obama years, and now seems utterly inept and even delusional. While technically nonpartisan, the liberal bent to The Rally To Restore Sanity And/Or Fear could hardly be more clear. Deeply enmeshed in his “Stephen Colbert” character, Colbert played the crazed, flag-humping, right-wing buffoon to Stewart’s measured, “why can’t we all just get along?” good-guy left-winger. When Colbert and Stewart duet on the snarky Lee Greenwood-style number “Greatest Strongest Country,” we’re meant to understand it as a goof on self-serving Fox-endorsed nationalism. But what about the part an hour or so earlier when you had a cadre of wholesome veterans sing a string-laden version of “The Star-Spangled Banner”? Are these patriotic displays pious or corny? Where do you guys stand, exactly?

As was the case on their respective TV shows, the dissonance between mocking the “divide and conquer” media for polarizing the country and the hosts’ own readily apparent political leanings is weirdly self-defeating. The Rally To Restore Sanity And/Or Fear was inevitably going to annoy conservatives. (“Keep Smug Alive” was the headline on The National Review‘s withering post-mortem.) And yet the event, even as satire, ultimately felt like a frustrating half-measure against a hostile opposition. It was – to use a word favored by another aughts-era TV personality who opted to actually enter politics — weak.

The strangest — and most telling — moment of The Rally To Restore Sanity And/Or Fear was when Stewart gushed about a new song that was “so apropos” to this event. And then he introduced Kid Rock, who came out to perform “Care,” a hymn to centrist “rationality” in the face of partisan “insanity.”

“Cuz I hear screamin’ on the left / yellin’ on the right / I’m sitting in the middle tryin to live my life,” Rock sang, before listing a number of issues — including poverty, war, and inequality — that he can’t do anything about. “The least that I can do,” he concluded, “is care.”

Describing what is essentially a pro-apathy song — it’s certainly true that the least anyone can literally do “is care” — as “apropos” to The Rally To Restore Sanity And/Or Fear is a far worse slam than anything conjured by The National Review. Also, it’s hardly “apropos” to the worldview of Kid Rock, who campaigned for Mitt Romney two years later and for Donald Trump in 2016 and 2020. He’s had no problem “yellin’ on the right” for the past decade.

In 2020, the left out of necessity has cut the sarcasm out of their protests. Believing that national divisions are a fantasy of opportunistic cable networks is a luxury none of us can afford any longer. But the influence of The Rally To Restore Sanity And/Or Fear persists in surprising places.

Earlier this month, Dan Brooks of New York Times Magazine wrote a perceptive piece on how Donald Trump has defanged our current crop of Stewart and Colbert wannabes. He coined the phase “ambiguous irony” to describe how the right now advances “joke versions of its actual agenda, in ways that make it hard to distinguish between the two,” creating “asymmetries in how insiders and outsiders interpret what is being said, so that any statement that gets too much blowback can become someone else’s failure to take a joke.”

What this means is that Trump can tweet ridiculous things — about COVID, about Hunter Biden, about rigged elections — and later claim that he was being ironic … or not. “The real Donald Trump acts as if he’s doing an impression of some normal-looking, occasionally self-aggrandizing president we don’t know about,” Brooks writes. This was the game Stewart and Colbert played for years. They might have looked and acted like political commentators, but if you failed to understand that were really just comedians having fun at the expense of lecherous Republicans, the joke was on you.

All of this is painful and even a little embarrassing to reckon with. Like so many white, college-educated liberals, I was a regular viewer of The Daily Show and The Colbert Report in 2010. Watching those shows back then felt like a tonic — these guys see what I see, they acknowledge the craziness that few else in the media will point out, and this makes me feel less alone. But now, I take a different message from The Rally To Restore Sanity And/Or Fear. It’s not a balm, but a warning — against complacency, against my own intellectual vanity, and against any possible suspicion that putting yourself above the passions of your fellow citizens is a virtue and not a defect.