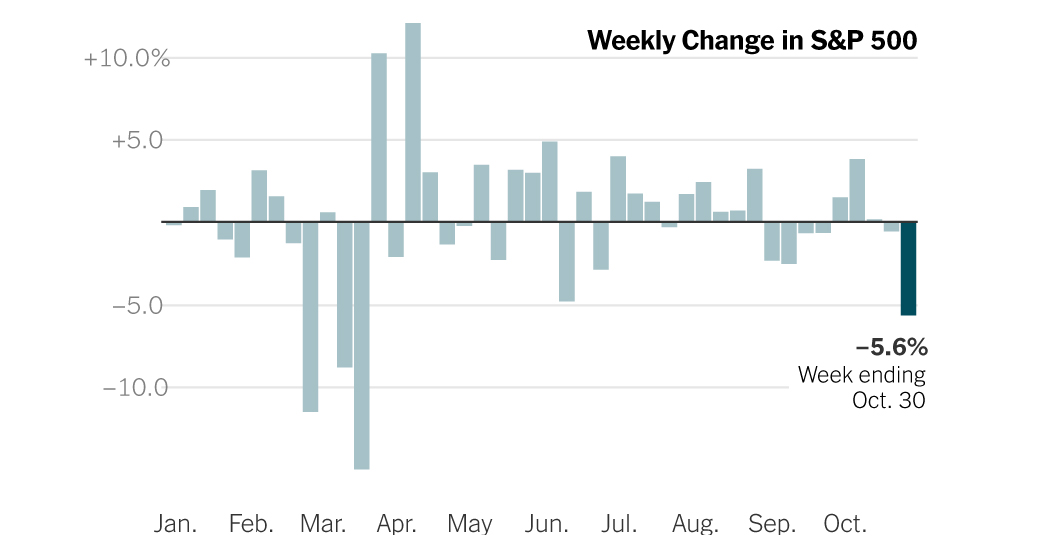 Stocks fell on Friday, dropping for the fourth time in the past five days in a retreat that has added up to Wall Street’s worst week since March, as rising pandemic cases, new shutdowns and a sell-off in large technology stocks all dragged the major benchmarks lower.

The S&P 500 fell 1.2 percent Friday, bringing its loss for the week to 5.6 percent. That’s its biggest weekly drop since the week through March 20, when stocks plunged 15 percent before they began to rebound after the Federal Reserve and lawmakers in Washington stepped in to bolster the economy. The Dow Jones industrial average fell 6.5 percent for the week, also its worst decline since March.

The latest sell-off has come as a second wave of cases forced more lockdowns in Europe, threatening the economic recovery and spooking investors around the world. In the United States, a record number of cases is prompting city and county governments to start imposing curfews and limits on gatherings.

Trading has been volatile for much of October, with investors whipsawed by uncertainty about whether Congress and the White House would agree on a new economic relief plan, anticipation of a contested election next week and concern about the sharp rise in virus cases.

“The Covid infections are moving in the wrong direction at a pretty quick pace, not just here in the U.S., but globally as well, so there’s a lot of concern about that among investors,” said Chris Larkin, managing director of trading and investment products at E-Trade Financial.

Concern about the economic impact of any pandemic-related shutdown has been particularly evident in energy markets. West Texas Intermediate crude, the American benchmark, fell 1 percent on Friday to close at $35.79, bringing its losses to 10 percent for the week.

In the stock market on Friday, big technology stocks led the retreat even after many of them reported a jump in profits. Twitter was the worst-performing stock in the S&P 500, dropping 21 percent, after its user growth fell short of expectations. Apple fell 5.6 percent, after it said a delay in the release of the iPhone 12 led to a dip in iPhone sales.

Facebook and Amazon were also sharply lower. Alphabet was the only one of the four tech giants that reported results on Thursday to gain, climbing more than 3 percent after reporting a rise in advertising on Google and YouTube. The Nasdaq composite fell 2.5 percent on Friday.

“The two predominant reasons for this are: more stringent Covid restrictions and tech earnings failing to impress,” said Yousef Abbasi, director of U.S. institutional equities at StoneX, a brokerage firm.

A rally in shares of those companies had helped pull the S&P 500 out of its slump, and to a record, earlier this year. Because they are enormous in size, the technology companies hold sway over the broad market indexes and they had been seen as the most likely to benefit from stay-at-home orders and the shift to remote work.

Although the earnings reports mostly supported that view, with Apple, Amazon, Facebook, and Alphabet reporting a combined $38 billion in profits for last quarter, the drop on Friday highlighted the argument that their share prices had risen too quickly.

Investors “focused more on their relatively cautious earnings guidance, with most of the companies citing pandemic risks or noting an uncertain operating environment,” Mark Haefele, chief investment officer at UBS Global Wealth Management, wrote in a note to clients after the results.

Shares in Europe were mixed on Friday, with the Dax in Germany and the FTSE 100 in Britain lower, while the CAC 40 index in France rose.

Data published Friday showed that Europe’s economy recorded its strongest rebound on record in the third quarter, jumping 12.7 percent from the previous quarter in countries that use the euro. But the latest lockdowns mean economists are now worried about a double-dip recession, which would happen if the economic growth is wiped out by the new orders to stay at home and the closure of bars, restaurants and nonessential shops.