Nobby Stiles, one of England’s 1966 World Cup winning heroes, has died aged 78 after a long period with prostate cancer and advanced dementia.

A European Cup winner with Manchester United in 1968, Stiles will be forever remembered for his victory jig at Wembley two years earlier, clutching the Jules Rimet trophy in one hand, the “Toothless Tiger’s” false teeth in the other.

“It’s still the biggest thing that happened to me,” Stiles, who also played for Middlesbrough and Preston, told the Guardian in 2002. “Everyone still wants a piece of you because of it. To be fair, I’m not as busy as some of the other lads. But wherever you go, what you did means so much to people. Not just lads of my age, you’d expect that. But kids of me grandkids’ age, they come up to me and go: ‘Hey, you, you’re the fella with no teeth who danced round Wembley, aren’t you?’ In a way, you end up belonging to everyone.”

A skilful and creative midfielder, Stiles was an uncompromising tackler and his robust style was the subject of some criticism during the 1966 tournament, particularly when his “rough play” against Jacques Simon put the French playmaker out of the game. But Alf Ramsey stayed loyal to his ever-present, bustling midfield terrier.

“By all accounts the [FA selection] committee told him in no uncertain terms I couldn’t play, that England needed to make an example of me. I was a liability, they said. Alf told them he’d resign if he couldn’t pick who he wanted. He was prepared to resign in the middle of a World Cup over me. I never found that out till he’d died, Alf. What a man.” 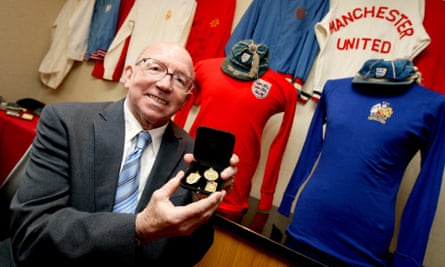 Nobby Stiles ahead of auctioning his memorabilia, including his World Cup winner’s medal, in 2010. Photograph: Dave Thompson/PA Wire/Press Association Images

Norbert Peter Patrick Paul Stiles, balding at 24, diminutive and short-sighted by his own admission had to overcome numerous hurdles to become a professional footballer. In his 2003 autobiography, he wrote that had been born “a half-blind dwarf who was bombed by the Germans and run over by a trolley bus when he was one”.

The former Manchester United midfielder, who lived close to Old Trafford until his death, like many of his England team-mates was forced to sell his medals and football memorabilia to raise money for his family. An auction in 2010 raised £425,000, with United paying a total of £209,000 for his World Cup and European Cup winners’ medals.

Stiles managed Preston, Vancouver Whitecaps and West Brom. After a stint coaching for United under Sir Alex Ferguson, his latter years were characterised by his struggles with Alzheimer’s and vascular dementia and his powers of speech declined. His family were critical of the lack of support for Stiles and thought that football – and particularly the Professional Footballers’ Association – should have shown a commitment within Stiles’ lifetime to complete research on the link between heading a football and degenerative brain disease.

The former England striker Gary Lineker paid tribute to Stiles. “Saddened to hear that Nobby Stiles has passed away,” Lineker tweeted. “Another of our 1966 World Cup winning heroes leaves us. He had a heart that was even bigger than the gap in his teeth. RIP Nobby.”