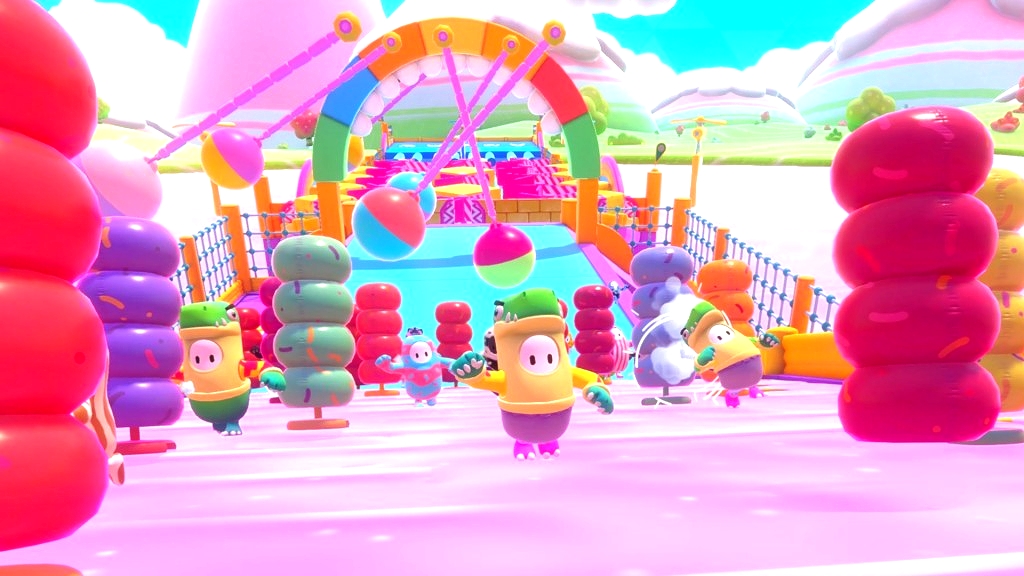 A massive, multi-player battle royale, Fall Guys sees players competing as oversized jelly bean characters across multiple obstacle courses and team sports arenas. Its premise is simple: cross the finish line before everyone else. Its aesthetic is almost childlike: explosions of color and character costumes feel like they’re swiped from the imagination junk drawer of a toddler. And yet, in the span of just eight weeks, Fall Guys has gained an audience of over 7 million gamers on Steam and it’s become the most downloaded game of all time on Sony’s PS Plus subscription service.

In fact, its launch day numbers were so staggering, Tanton’s team had to shut down its servers within the first 24 hours to accommodate the mass influx of gamers, something he humbly admits was a “wild” first for the studio. It was massive online pandemonium — hordes of new and experienced gamers flooding through unkept gates in much the same way the titular candy-shaped mascots pile-drive their way through neon-colored racetracks.

But to understand why the game hit with audiences — and more importantly, what it means for the future of accessible gameplay — you’d have to go back to the starting line. Not the one filled with 60-odd super-competitive bonbons ready to topple over one another for a shot at glory, but to the beginning of 2018, when Tanton gave his development team one fairly straightforward thought-starter.

“Just pitch me something you want to play.”

That’s what he told game makers in January of that year ahead of a publisher’s conference where they’d eventually pitch the idea to Devolver (who’d go on to help make the game). Freed up from thinking about business models and marketing opportunities, Fall Guys creator Joe Walsh handed in a one-sheet filled with GIFs from gameshows like ABC’s Wipe Out and Takeshi’s Castle. Back then the game was called Fool’s Gauntlet, but not much else changed from inception to actual creation.

The characters were still jelly-bean-like creations that players could dress up in different skins — Pigeon may be the most popular but Mallard is criminally underrated in this writer’s opinion — the worldbuilding was contained and to-the-point and the emphasis was on opening the arena to gamers who might have shied away from multi-player experiences in the past.

“I think people do love playing with each other, but perhaps there’s just not been many opportunities for people to do that at scale without putting a gun in someone’s hand, which is kind of instantly disqualifying for a lot of people,” Tanton says. “One, because it might not be their thing, but also because it’s quite a high barrier entry if you’re not a regular player. So for us, accessibility was there right from the start.”

And part of attracting a new crowd meant leaning into the comedy of it all.

A behavioral expert could probably breakdown why watching anatomically-correct bean-shaped candies dressed in hot dog suits waddle their way down a race track before falling into slime pits or making a misstep on a disappearing hexagon works on a psychological level, but our most basic analysis is this: it’s funny as hell.

“Early in development, I had been asked by another publisher, ‘What’s their special power? There must be a button that you press and they do something special. These characters, what is it they do?’ And I remember just saying again and again, ‘I don’t know man. They just fall over. That’s what they do,’” Tanton says. “It tied straight back to all of the Takeshi’s Castle GIFs. You don’t watch those things to see people succeed. You watch those things to see people fall in the most entertaining way possible.”

So that’s what the team spent most of their time doing: figuring out how to make their characters behave in ways that still rewarded gamers, even when they would eventually lose. Part of that reward system lies with the in-game currency — you collect Kudos for simply playing games and Dubs for winning levels — but a bigger part comes in finding the humor in failure. The Fall Guys can pile up like a heap of bricks in a game like Door Dash where players blindly barrel through doors hoping that one might fall. The joy here is in the mayhem of a traffic pilot, watching as jelly beans roll and push and dive headfirst into psychedelic moshpits. Or they can grab and hoard eggs in a game like Egg Scramble, a team sport that’s as bizarre as it sounds.

The physicality — and adherence to the laws of gravity — was something Tanton borrowed from a BBC roadshow that’s long been outlawed where posh presenters would dress up unassuming townspeople in ridiculous costumes and ask them to complete increasingly difficult obstacle courses. They modeled the Fall Guys limited athleticism and signature looks off the show’s comedic vibe.

“We always knew they had to be top-heavy, to have low ground clearance,” Tanton explains. “I guess the padded suit thing came from the fact that we didn’t want them to look like they were getting hurt. That wasn’t part of it. They needed to look like they could bounce back from anything.”

So dismemberment was out.

Another popular gaming feature the team did away with was the in-game chat, something you find with nearly every multi-player experience these days.

“We know it’s a risk,” Tanton says of the decision. “We know some people love the voice chat and there are still ways to do that outside of the game with your friends. But for us, we didn’t want that potential toxicity to push people away.”

In fact, it’s that sense of positivity and hopeful optimism that sets the game apart — probably more so than having oversized jelly beans in Japanese game show attire run amok on racetracks that feel lifted from The Beatles Magical Mystery Tour era. The crew went back to their school days to craft their own set of gamer motivations — answering philosophically-minded, play-predicting questions by tapping into what sparked their love of group play in the first place.

“We needed to understand why people would want to keep playing this game,” Tanton explains. “In many ways, we moved away from video game psychology and took it back to the playground. A lot of our game design came from, ‘What is it that makes those games appealing? Why do people keep coming back? What is it about games that involve a lot of people?’ Really kind of digging into the psychology of children’s games.”

It was a process that took years of development and planning, but there’s something to be said for the timing of Fall Guys too. Thanks to the pandemic and subsequent lockdown of 2020, video game sales are up by 35% year-over-year. Twitch, the most popular streaming platform, has seen 1.49 billion hours watched while Steam saw 20 million gamers using its platform in March. People are confined at home and searching for new ways to connect, and many of them aren’t lifetime gamers with the skillset to excel in more difficult multi-player worlds — think Call of Duty or Fortnite.

“It would be crazy to not point at the world around us right now and see that it potentially offers a really nice bit of escapism for people who are struggling at the moment,” Tanton agrees. “We’re not alone in this. I think there are other games that have really landed recently that have done the right thing for certain groups of people. Everyone deals with it in different ways. For some people, their way of unwinding might be Call of Duty, and that’s fine. There’s no judgment. I’d just like to think that Fall Guys offered something for people who still needed that competitive adrenaline burst or that sense of community without having to pick up a gun.”

Mediatonic doesn’t collect data on who’s playing the game, so Tanton doesn’t have any hard numbers on new-to-gaming subscribers or age demographics, but he’s got anecdotal evidence that might tell that side of the story even better.

“It’s the first time [friends] have kind of reached out to me and just said, ‘Oh, my kids are playing your game and they love it. We’ve played as well and we’re having a really good laugh with it’” he says. “This is a whole bunch of people I would not expect to be entertaining anything I made previously. I think we are clearly reaching new audiences. This is what we always wanted, but we were never, I would say, arrogant enough to expect it would all kind of work out.”

From here, Fall Guys is mulling its mobile gaming options, a move that Tanton says “makes sense” given the studio’s history of creating successful mobile titles. But its also looking towards the future, trying to figure out how to replicate the “bottled lighting” of its surprise hit to pave a new avenue for curiously-minded potential gamers to find their way in the space.

“One of the things I’ve always loved is our ability to surprise,” Tanton says. “So we’re always looking at what potential ways we can surprise an audience next, but what I hope happens with Fall Guys is that it broadens the range of experiences available to people, and I think a lot of people have tapped into it.”