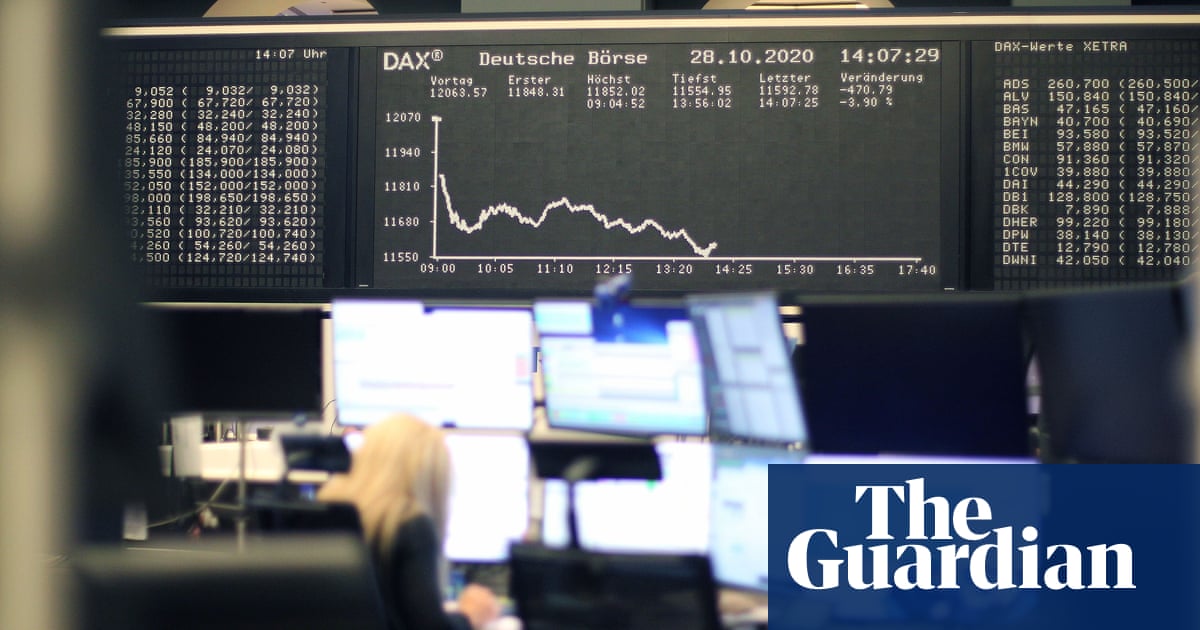 Stock markets in Europe have suffered their worst week since June after investors shrugged off record-breaking growth for the eurozone and focused on the likely impact of fresh lockdown restrictions.

Amid growing fears that a second wave of Covid-19 would end the west’s recovery and even threaten a double-dip recession, news of a near 14% quarterly jump in the GDP of the single currency zone did nothing to lift the mood.

Investors should prepare for worst over US presidential election

The Europe-wide Stoxx 600 lost 5.6% this week, as the lockdowns in Germany and France prompted a wave of selling. Frankfurt’s Dax index was down 8.6% since trading began on Monday while Paris’s CAC lost 6.4% of its value in a week of frenetic trading reminiscent of the panic-selling in early March.

Analysts said figures showing that each of the four biggest eurozone countries – Germany, France, Italy and Spain – put in stronger than expected performances in the third quarter of 2020 were now seen as “history”.

Data from the EU statistics agency Eurostat showed that GDP across the 19-nation single currency region rose by 12.7% in July to September, well in excess of the 9.4% growth expected by the financial markets.

The rise in eurozone GDP followed contractions of 11.8% in the second quarter and 3.7% in the first three months of the year, and despite the recovery between July and September, the economy was still 4.3% smaller than a year ago as it entered a new period of tougher anti-pandemic restrictions.

Wall Street was on course for its worst week since the early days of the Covid-19 crisis in March, with concern over record numbers of new infections compounded by disappointing figures from some of the US biggest tech firms.

Ahead of next week’s presidential election, the S&P 500 was down by more than 1% in early trading in New York and on course to have lost 6% of its value in a week. The Dow Jones industrial average was down 1% on the day, on course to lose 2,000 points – or 7% – over the week.

The UK’s main stock market index – the FTSE 100 – had a quiet end to a gloomy week. A loss of four points meant the index was virtually unchanged on the day at 5577 but its loss of 283 points during the course of the week was its weakest performance since June. The FTSE is now 26% down on the year.

Falling oil prices reflected concern that weaker activity would lead to weaker demand for fuel, with both of the market’s main benchmarks – US light crude and Brent crude – heading for weekly falls of more than 10%.

Barret Kupelian, senior economist at PwC, said: “The bad news is that Europe is now experiencing a surge in infections. Authorities have responded in a mixture of ways intended to limit contact, which is likely to slow economic activity in the fourth quarter.”

The European Central Bank signalled this week that it would provide fresh stimulus for the eurozone economy in December after becoming gloomier about the prospects for growth, unemployment and inflation.

Eurostat said unemployment in the eurozone jumped by 75,000 in September to 13.612 million, an increase of 1.3 million in the last year, while inflation remains unchanged at a -0.3% annual rate.

Florian Hense, analyst at Berenberg, said: “The third quarter is history. Countries across Europe are tightening restrictions to contain the second wave of Covid-19. Economic activity is likely to contract in the eurozone in the fourth quarter.”