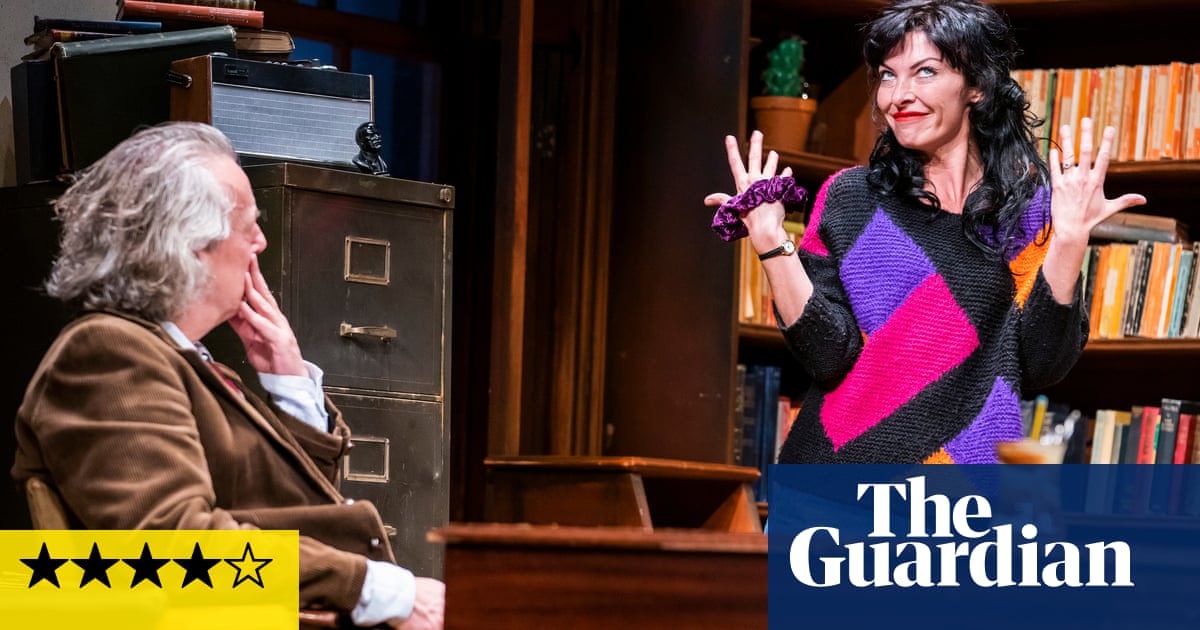 This 40th anniversary production of Educating Rita was first staged in 2019 and performed outdoors, on a Cornish cliff-edge, earlier this summer. Now it’s coming indoors, and its producer, David Pugh, suggests that the constraints of social distancing make for less than perfect conditions and that “in an ideal world” this is not how he would “choose to present Willy Russell’s play”.

But the play is, in many ways, the perfect drama to revive for a socially distanced stage. A two-hander with a sleek script, its Pygmalion-like story has an odd couple at its heart: a jaded university professor disillusioned with academia, and a working-class hairdresser in thrall to his bookish world, who both keep their distance, physically at least, despite the intimacies that build between them.

If the production takes time to lift off, it is not because of the social distance or the spirited performances by Stephen Tompkinson as Frank, the old soak of an “Eng Lit” tutor, and Jessica Johnson as Rita, his Liverpudlian Open University student. They play their parts with sharper edges than Michael Caine and Julie Walters did in the 1983 film, losing some of that couple’s gentle charm, but the dynamic between them works well enough.

It is more that the comedy doesn’t always land in the early scenes, sometimes feeling over-egged, while the drama takes its time to gather in force. Before it does, the tone wobbles and it feels a little too lost in the past, from nostalgic references to Kim Wilde and Robin Day to the unreformed 1980s wardrobe (hot-pink jumpers, pencil skirts, gold belts), and Rita’s bright-eyed hope of transformation, which, in this period context, seems to capture the dream of upward class mobility in Thatcher’s Britain, alongside her purer desire to feed her soul with learning.

As the comedy calms and the drama sets in, the actors build a chemistry that contains more intellectual tensions to become a better, deeper, play with an almost painful tenderness between them by the end.

Directed by Max Roberts, the story ekes out Frank’s contempt for academic snobbery but also his own inverted snobberies towards Rita, who he seems first to hail as something of a latter-day noble savage (or “native” in her words). Rita, for her part, challenges his prejudices and as she warms up, the play’s underlying questions of how education, and literature, can liberate us psychically begin to seem more relevant to the place and value of the arts now, in post-lockdown society.

Tompkinson sensitively distils the mid-life angst of the professor and his barely expressed, quietly possessive yearning for Rita, and while Johnson appears a little too ebullient as Rita at the start, her performance fills out and becomes more emotionally astute as she resists a romantic ending to become her own, liberated, woman.

She also provides the play’s most heart-stopping – and romantic – moment, which shows these two characters brought together in a sudden burst of affection, even as they prepare to peel away into their own separate lives.

• At the Rose theatre, Kingston, until 14 November.