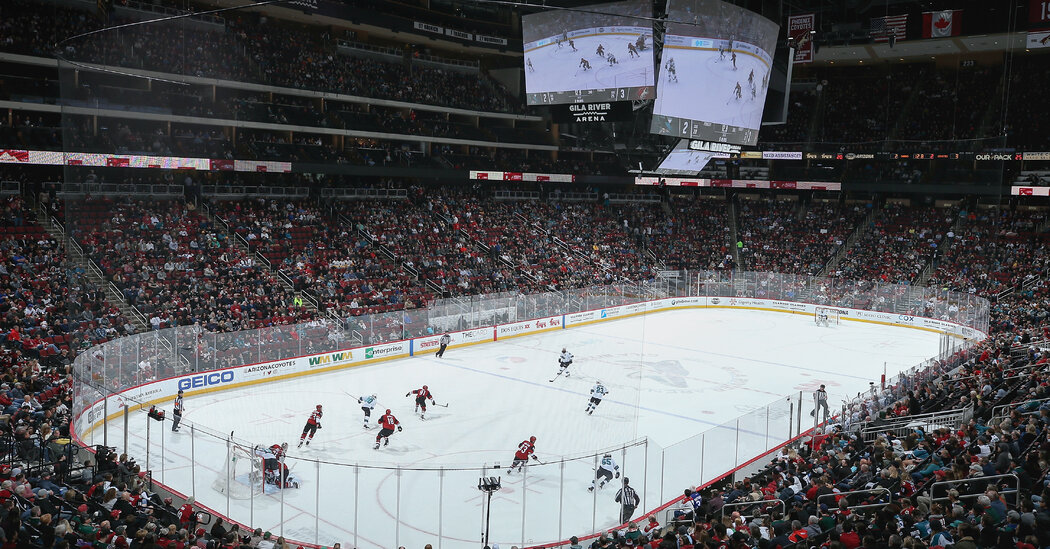 The Arizona Coyotes said on Thursday that they had renounced the rights to their top pick in this year’s N.H.L. draft after a published report described the player’s 2016 conviction in a juvenile-court case related to bullying of a Black classmate who has a developmental disability.

The Coyotes said they knew about the abusive history when they drafted the player, Mitchell Miller, an 18-year-old defenseman, in the fourth round, according to the report in The Arizona Republic, Miller, who is now a free agent, provided all 31 N.H.L. teams with a letter before the draft, saying he regretted what he had done and providing character references.

The revelation about the bullying case and the Coyotes’ decision followed a season in which the N.H.L., a mostly white league, was forced to confront several acts of bigotry. It also has cost Miller, a freshman, his place on the University of North Dakota’s hockey team. On Friday, North Dakota’s president announced that Miller would no longer be allowed to play for the team, though he will be allowed to remain a student at the university.

“In junior high, I got beat up by him,” Miller’s victim, Isaiah Meyer-Crothers, told The Republic. “Everyone thinks he’s so cool that he gets to go to the N.H.L., but I don’t see how someone can be cool when you pick on someone and bully someone your entire life.”

Miller and Meyer-Crothers knew each other growing up in Sylvania, Ohio, a suburb of Toledo along the state’s border with Michigan. The Republic said that a police report on the abuse stated that Miller, who was 14 at the time, and another student had forced Meyer-Crothers to eat candy that had been wiped in a bathroom urinal. The Republic said that, according to the police report, Meyer-Crothers had to be tested for hepatitis, H.I.V. and other sexually transmitted diseases, but the tests came back negative.

Meyer-Crothers, now 18, told The Republic that Miller had taunted him for years while they were growing up and had used a racist slur while hitting him. He said it “hurt my heart” when he saw that the Coyotes had selected Miller in the draft. His mother, Joni Meyer-Crothers, has also said that the taunting of her son was still happening as recently as two years ago.

Miller and the other student were charged with two misdemeanors, one for violating Ohio’s Safe Schools Act and one for assault. They were sentenced to 25 hours of community service and ordered to write an apology through the court system to Isaiah Meyer-Crothers; to participate in counseling; and to pay court costs. Miller has not personally apologized to Meyer-Crothers, the victim’s family told The Republic.

Meyer-Crothers and his mother also told The Republic that the Coyotes had never contacted their family before the draft.

On Thursday night, Joni Meyer-Crothers told The New York Times that the Coyotes had called her earlier in the day. “The CEO and GM apologized, and it was heartfelt,” she said in a text message. “My only comment is the whole situation is very sad.”

Xavier Gutierrez, the Coyotes’ president and chief executive, acknowledged in a statement on Thursday that the team knew of the accusations. “Prior to selecting Mitchell in the N.H.L. draft, we were aware that a bullying incident took place in 2016,” Gutierrez said. “We do not condone this type of behavior but embraced this as a teachable moment to work with Mitchell to make him accountable for his actions and provide him with an opportunity to be a leader on anti-bullying and antiracism efforts.”

Gutierrez said the team had decided to cut ties with Miller after digging more deeply into the matter and learning about the effects of the bullying on Meyer-Crothers and his family.

Bill Armstrong, the new general manager for the Coyotes, was not allowed to participate in the 2020 draft process with Arizona because of an agreement with his former team, the St. Louis Blues.

“Mitchell is a good hockey player, but we need to do the right thing as an organization and not just as a hockey team,” Armstrong said in a statement.

North Dakota also acknowledged it was aware of the assault charge when Miller joined its hockey team. But the university’s president, Andrew Armacost, said Friday that after discussions with Miller, his family and Coach Brad Berry, among others, “I have decided that the best course of action for Mitchell and the university is that he no longer be a member” of the hockey team.

“We expect our students to live by our values in the classroom, in the community and when representing the university on the field of play,” Armacost said, adding that Miller would be allowed to remain a student at North Dakota.

Berry had earlier defended the decision to keep Miller on his team, telling The Grand Forks Herald: “We made a decision that our program could provide him the necessary infrastructure and culture to hone not only his hockey abilities, but most importantly assist him in his continuing growth as a human being, which will last him the remainder of his life.”

Brian Burke, a former general manager who is now a Sportsnet analyst, said the Coyotes should not have drafted Miller.

“I was sickened when I read the story,” Burke said in an interview. “I think the league has made great strides to make things right on diversity and racism, but the league still has work to do.”