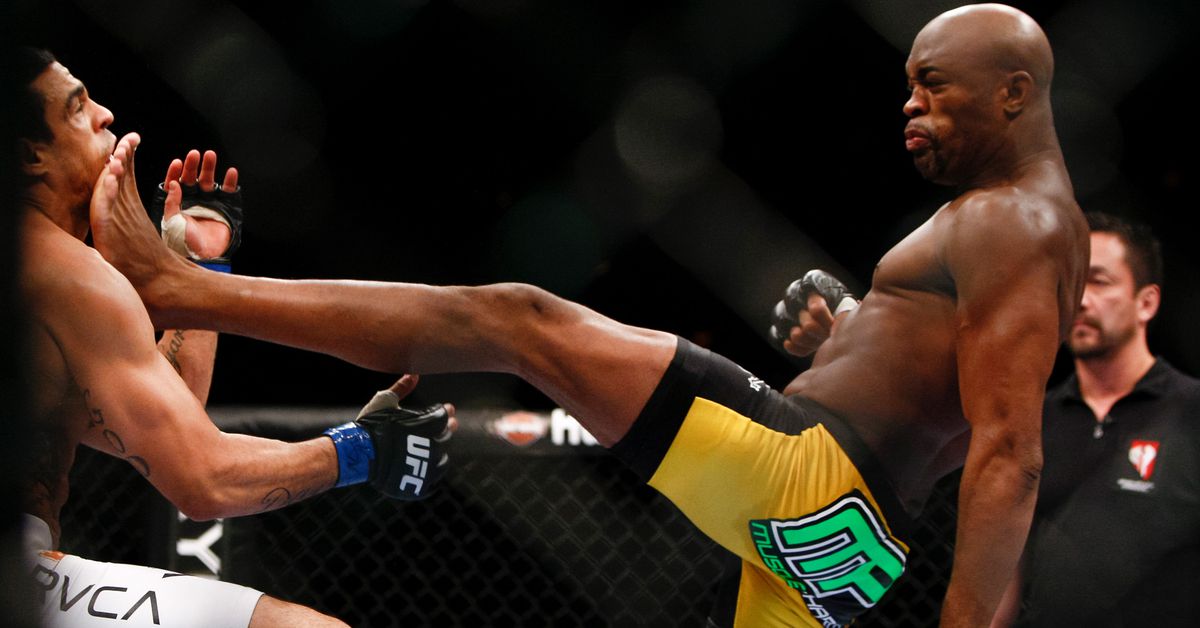 Anderson Silva has built a career filled with highlight-reel moments.

From his introduction to the UFC when he bludgeoned Chris Leben with knees to capturing the middleweight title one fight later after smashing Rich Franklin’s nose to become champion. Silva has a long list of iconic memories from his historic undefeated run from 2006 to 2012, which includes 10 consecutive title defenses as well as several high-profile victories in the light heavyweight division as well.

With his upcoming fight against Uriah Hall at UFC Vegas 12 being touted as the last of his career, Silva took time to look back at some of his most memorable finishes and rivalries.

At UFC 101, Silva competed at 205 pounds as he looked to bounce back from a largely uneventful five-round title defense against Thales Leites four months earlier. On that night, Silva received loads of criticism for not engaging with Leites enough and while he won a unanimous decision, it wasn’t the crowd pleasing affair most were accustomed to when it came to the Brazilian’s performances.

Taking on former light heavyweight champion Forrest Griffin was supposed to be a tough task for Silva as he moved up a division to face a bigger challenger, who was well known for his durability and finishing power. What resulted was anything but a war after Silva ducked and dodged Griffin’s best punches and then just demolished him with a devastating counter-striking attack.

When the final punch landed that put Griffin down on the mat, he just waved off the fight and exited the octagon before Silva could even get his hand raised.

“First of all, I need to say thank you to Forrest Griffin,” Silva said about his performance during the UFC Vegas 12 media day. “What’s special about this fight is I was watching whole tapes about Muhammad Ali fights and I remember I watched a lot of Muhammad Ali fights and I just said you know I think that’s the secret to make something good in this fight. The magic moment happened.

“I just need to say thank you to Forrest. This is the best moment in my life. Of course I have a lot of best moments but this is a very special moment, too.”

After dismantling Griffin, and defending his middleweight title against Demian Maia, Silva was then matched up against outspoken contender Chael Sonnen, who had made it his personal business to trash talk the 185-pound champion like no opponent he had ever faced before.

Sonnen attacked Silva, his country, his manager, his coaching staff and just about anybody else peripherally associated with the middleweight champion. Then he put on an absolute clinic for the better part of four rounds as Sonnen negated Silva’s striking arsenal by dragging him to the canvas over and over again while applying a severe ground-and-pound attack.

It wasn’t until late in the fifth round when Sonnen was just minutes away from victory that Silva snatched victory from the jaws of defeat when he wrapped up a triangle-choke submission to finish the fight. The end came at 3:10 in the final round as Silva mounted one of the greatest comebacks in UFC history.

“Thank you Chael. Thank you for everything. You’re an amazing guy. Hopefully I see you very soon and talk together about life, about kids. I know you have a kid right now. He starts to fight, I have two. Let’s go talk. This is an amazing sport. I’m so happy to stay here talking about us and thank you for giving me the great opportunity for fight with you, Chael.”

Finally, Silva addressed the battle of Brazilians when he faced Vitor Belfort in a hotly contested matchup at UFC 126 in 2011. At the time, Belfort was on a five-fight win streak including a stunning knockout against former champion Rich Franklin in his return to the UFC.

That night, Silva finished Belfort in spectacular fashion with arguably his greatest knockout as he sent “The Phenom” packing with a jaw-dropping front kick. Like something out of The Karate Kid, Silva just flicked his leg out and mashed Belfort’s face with the end of his foot.

Belfort crumbled to the mat in a heap as Silva celebrated his victory along with a Knockout of the Night bonus for his incredible handiwork.

“I think the fight with Vitor opened a lot of doors for Brazilian fighters,” Silva said. “This fight in particular help us to make the sport very popular in Brazil and help the future of the sport in Brazil. Vitor is a legendary fighter, a very good fighter.

With at least one more fight left to go in his Hall of Fame career, Silva will attempt to add another highlight when he faces Hall in the main event from Las Vegas on Saturday night.