Perhaps you are having a top-notch 2020. Someone must be. But for the greater part of the population … not so much. Let us focus, therefore, on two welcome shining lights in the darkness – our Hughs. The homegrown talents of Messrs Laurie and Grant, specifically, which are currently on show in the popular new primetime dramas Roadkill (by David Hare) and The Undoing (by David E Kelley). Laurie plays the lead in the former – the villainous Tory minister (I know, I know – address your tautology complaints to the usual place) Peter Laurence, all compelling charm without and lethal venality within.

Grant co-stars with Nicole Kidman in the latter as her devoted husband, the rich, charismatic Jonathan Fraser, who goes missing when a buxom local wench is found murdered and whose moral depths we have yet to fully plumb.

Both actors have enjoyed successful careers, rooted in and defined in their early stages by comedy, but the late-season flowerings they are now enjoying are a joy to behold.

Laurie, of course, began (in the public consciousness at least) as part of the mid-80s Oxbridge comedy influx as the Prince Regent in Blackadder, with Stephen Fry in A Bit of Fry and Laurie and again as the quintessential Bertie to Fry’s quintessential Jeeves, in Jeeves and Wooster. Then came parts in (mostly) children’s films, including 101 Dalmatians and Stuart Little, which established him as a presence across the pond and led to comedy finally giving way to drama when he landed the role of Dr Gregory House in the hugely successful medical drama House, which ran for eight seasons and made him “properly” famous in the US. House was a man so misanthropic he more or less counted in what was then at least a pathologically optimistic land as a borderline villain, but he was a springboard to the undiluted thing. When the series ended, Laurie shifted the dial again as the unrepentant arms dealer Richard Onslow Roper in 2016’s The Night Manager. 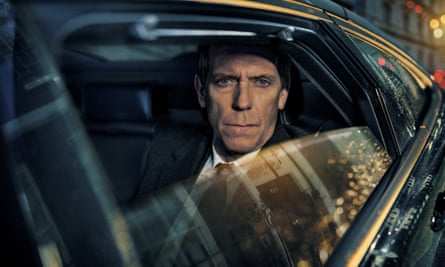 Grant started off in serious roles. He was a member of Oxford University Drama Society and his first major role was in the 1987 adaptation of EM Forster’s Maurice – a moving performance in a delicate, emotionally charged film. But it was his turn as the bumbling posho Charles in the romcom of romcoms Four Weddings and a Funeral that made him famous, and the likes of Notting Hill (where he played Charles again) and Love, Actually (Charles as prime minister) that kept him trapped in bumbling posho aspic.

Grant fought his way out via Bridget Jones’s Diary (as Daniel aka dark Charles), Florence Foster Jenkins (as her touchingly tender companion and manager, complicit in her delusions from the best of motives), and turning in career-best performances as the murderous thesp in in 2017’s Paddington 2 and the near-murderous politician Jeremy Thorpe in A Very English Scandal two years ago.

Part of the joy comes from the simple delight of seeing people – and this is true in any field, not just acting, though this is by its nature where we most often experience it communally – get better at what they do, building on what has gone before, adding more strings to their bows. Watching Grant as the complicated, multilayered, deeply, darkly funny antihero Thorpe, for example, is all the richer an experience for having seen him start as the one-note – even though that note was played perfectly – Charles all those years ago. Likewise, watching the scabrous spark on show in An Awfully Big Adventure fanned into glorious flame, in different ways, in Paddington and A Very English Scandal.

And watching Laurie leaven the overearnestness of House with all the comic skills he honed 20 years before often felt like a private pleasure just for the folks back home (the bulk of House’s US audience were unaware that Laurie was English, let alone a comedy performer).

They have also come to seem less haunted by their success. Conscious to varying degrees of their privilege, and coming from families (medical for Laurie, military for Grant) that dealt in more tangible benefits to society, both men have mistrusted their talents and the rewards reaped. Laurie’s Presbyterian upbringing and self-described depressive nature has never lent itself to easy celebration and Grant’s temperament seems to be that which scorns everything gained too easily. Now they seem to have relaxed a bit. Age has not withered them but brought wisdom. Or at least conciliation.

Perhaps the Hughs’ third act is so pleasing because in essence they are following the trajectory we all hope to follow – in some more minor key and in our far less glamorous ways – in our own lives. Fun-filled early years that manage to sow some decent seeds, consolidate the gains and correct our paths in middle age and then reap the harvest after that. And if we make people laugh along the way, and find ourselves beloved by the end – well, who could ask for anything more?