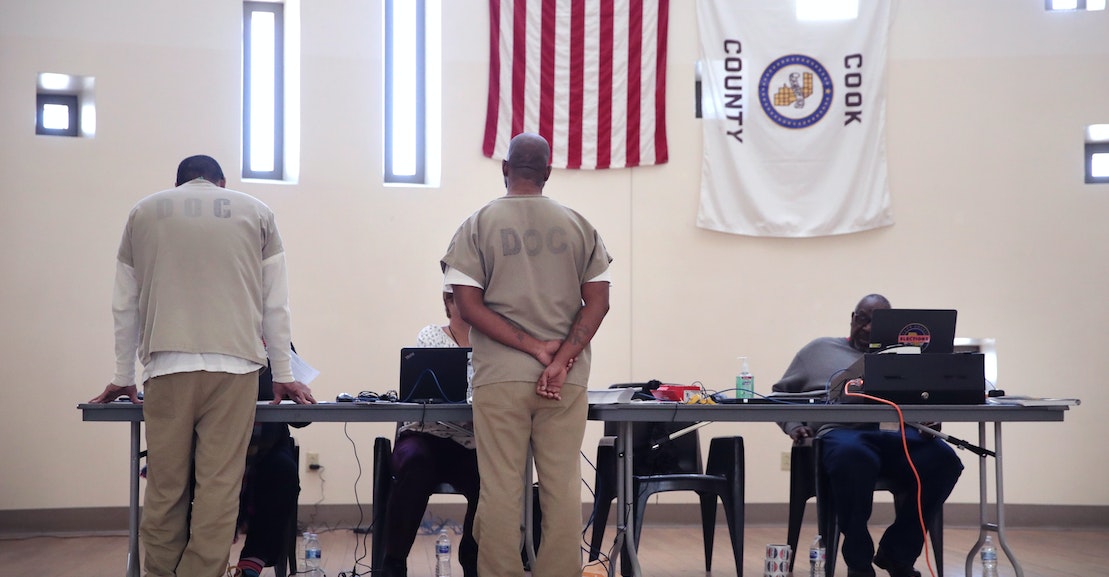 For the people trying to get out the vote in jails across the United States, there are no doors to knock, no sidewalks to canvass from. The people they are trying to reach may not even know they have the right to vote. For people in jails who are registered to vote, the vast majority of them won’t have access to a polling place. In reality, they have to rely on the people who jail them to ensure they get to vote. The nearly half a million people, on average, awaiting trial in jail on any given Election Day retain the right to cast a ballot. But many of them, along with groups working to protect their votes, know that having the right isn’t enough.

For the past decade, Meredith Hellmer has been trying to reach voters who are jailed in Cuyahoga County, Ohio, with the Northeast Ohio Voter Advocates. They had built a comparatively supportive relationship with the jail officials there, too. “It really waxes and wanes depending on who’s in charge,” Hellmer told me, a few weeks ahead of the 2020 general election. Up until this year, NOVA volunteers could visit the jail and have one-on-one meetings with people who wanted to register to vote. They would register around 300 or 400 people in any given election cycle. Those conversations with prospective voters, in visiting rooms and hallways, helped break down myths about voting that had prevented people from registering: “Their biggest misconception is that they aren’t allowed to vote, that they think any kind of felony record would prevent them from voting.”

It’s understandable why people who are in jail may reasonably assume they’ve lost their right to vote. Jails are “incarceration’s front door,” confining people who have been arrested, but, in most cases, have not yet been convicted of any criminal offense. They may also be unable to afford their bail in order to get out as their criminal case progresses. While around 631,000 people are held in U.S. jails every day, the number of people who have been to jail in a given year is higher; according to the Prison Policy Institute, “every year, over 600,000 people enter prison gates, but people go to jail 10.6 million times each year.” There are also about 5.2 million people in and outside prisons who are currently disenfranchised due to laws restricting voting rights for those convicted of felony crimes. That’s one out of every 44 adults in the U.S., according to a new report from the Sentencing Project. (And in some states, the rate is much higher: In Alabama, Mississippi, and Tennessee, one out of every 13 adults is disenfranchised.)

In recent years, while efforts to end felony disenfranchisement have gained more ground—and in some cases, have succeeded—the voting rights of those still incarcerated have received less scrutiny. There isn’t national data available on jail voting turnout, but from what voting rights advocates have seen, these myths and obstacles have likely seriously depressed turnout. The League of Women Voters of Metropolitan Columbus has started a jail voting outreach program in Franklin County, the state’s most populous county. The program’s coordinator, Elizabeth Grieser, told me that during the 2016 presidential election, out of the 2,100 people jailed in Franklin County, the total turnout was 11—and in the 2018 election, it was zero.

Voting rights groups have turned their focus on people jailed in Ohio, along with other battleground states: Pennsylvania, Texas, and Arizona. That was before Covid-19. The outreach work in places like Cuyahoga County, where it was making some progress, is now compromised by the pandemic. On the same day I spoke to Meredith Hellmer from NOVA, she was scheduled to have a video visit with a prospective voter in jail, something the jail staff had been accommodating as an alternative to the in-person visits they had to stop in the fall. It wasn’t a given, even before, that jail officials would support their efforts, whether that was agreeing to make ballots available to those who asked but not doing much more, or getting more involved, like helping volunteers through the cumbersome rules associated with visiting a jail. “For my volunteers who don’t have a lot of experience with the criminal justice system, it’s hard for them to grasp—and understandably so—that there’s all these people in jail, awaiting trial,” she said. Some of her volunteers had never set foot in a jail before.