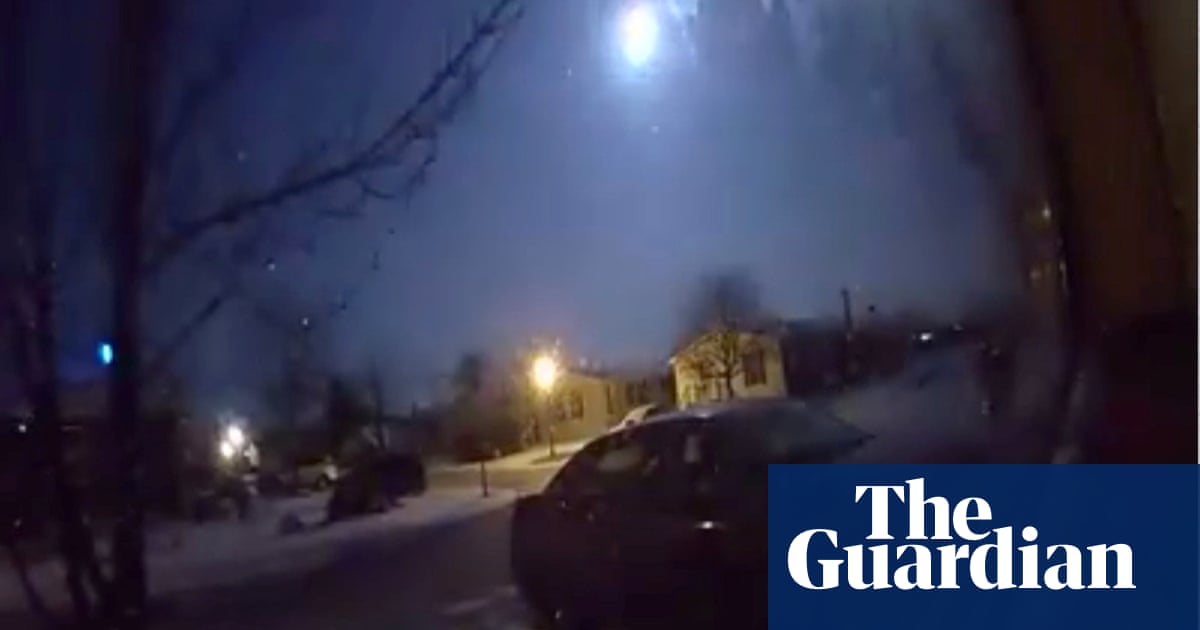 A fireball that struck near Hamburg, Michigan, in 2018 after observers reported loud bang and a flash of light in the sky could offer new insights into the history of the solar system, researchers have said.

The fireball – a type of very bright meteor that would even be observed in daylight – was spotted in several states as it flew across the sky on the evening of 16 January 2018; the space rock also produced an atmospheric shockwave equivalent to a magnitude 2.0 earthquake.

Walnut-sized fragments of the meteorite were rapidly recovered from Strawberry and Bass Lakes by meteorite hunters using information from scientists who had been tracking their trajectory using Nasa’s weather radar.

“Finding a pebble-sized fragment on a frozen lake or in a snow blanket is difficult if you don’t know where to look,” said Philipp Heck, a co-author of the report and associate professor at the University of Chicago who is also curator of the meteorite, rock and mineral collection at the Field Museum of Natural History in Chicago.

Now Heck and colleagues have released an in-depth report examining three of the meteorite pieces housed at the Field museum.

The results reveal that the space rock is of a type known as a H4 chondrite – a relatively rare subtype of a class of meteorites common in collections.

Heck added that initial analysis of the space rock revealed that the meteorite contained 2,600 different organic compounds. While an even greater array have been found in other meteorites, Heck said the findings add weight to the much-mooted idea that meteorites might have play a role in kickstarting life on Earth.

“I personally found it stunning how many organic compounds were still in this meteorite despite its thermal metamorphism,” said Heck.

But there were other insights.

“We found [this meteorite] was ejected 12m years ago from its parent asteroid” said Heck, noting this is the first evidence of that particular event.

And analysis of levels of Argon in the meteorite, produced by radioactive decay, shed light on the history of asteroid itself, with Heck noting Argon is released when impacts occur. “We found nothing else happened since the [parent asteroid] formed 4.5bn years ago,” said Heck. “It was pretty much dull on that asteroid.”

Heck said that as the Hamburg meteorite fell onto frozen ice, it was relatively uncontaminated. But to have a really pristine sample it is necessary to recover space rocks directly from asteroids: an endeavour a number of space missions have set out to do, including the Nasa spacecraft Osiris-Rex that is set to return to Earth in 2023.

Dr Katharine Joy, an expert on meteorites and lunar science at the University of Manchester, who was not involved in the report, said space rocks like the Hamburg meteorite are exciting as they are fresh extraterrestrial samples.

“By looking at the minerals and age and chemistry of [meteorites] we can look back in time to understand how its parent asteroid body relates to other asteroids and small bodies we know formed at the same time within the first few million years after the sun formed,” she said.

Joy added that the UK Fireball Network, is currently watching the skies for meteors, and encouraged readers to report sightings themselves to the network.

“It will be an exciting day when we get the right type of fireball and can go out, track down the fallen stone and analyse it to work out where it came from,” she said. “It would be completely amazing if it was from a completely unique type of asteroid or a piece of a large body like the moon or Mars.”