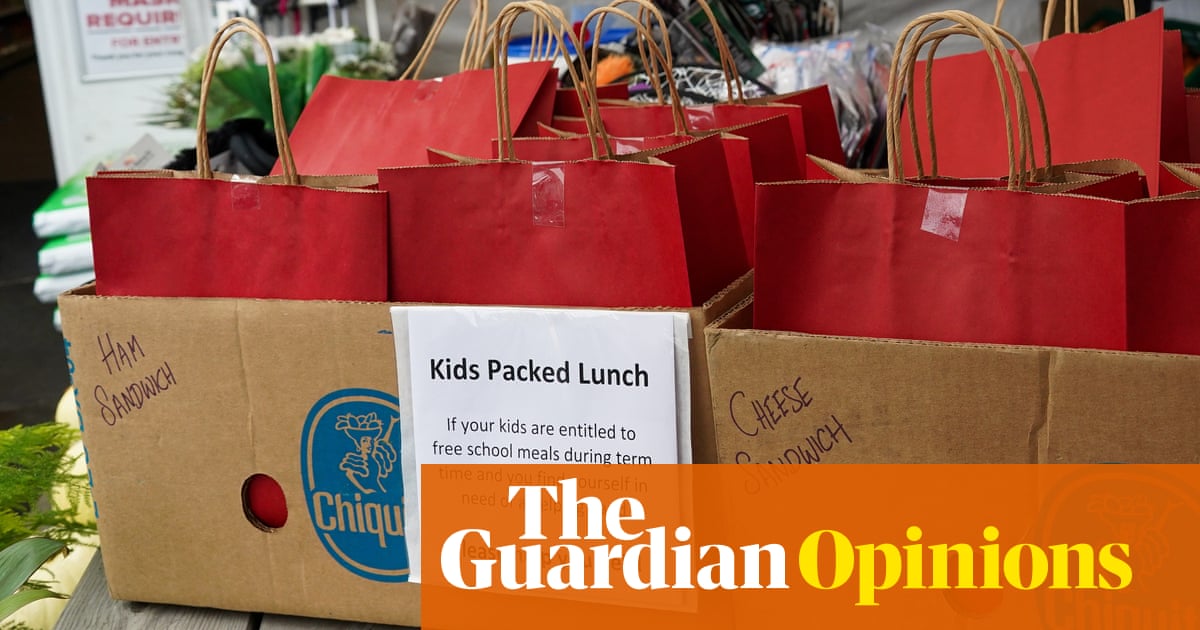 When in a hole, it helps to stop digging. This government has now so categorically lost the argument over extending free school meals through the holidays that the only way of escaping with any dignity is to give in. When every other small cafe owner in England seems to be offering free sandwiches to kids over half-term, even while struggling to keep their own businesses afloat in a pandemic, then you should know you’ve lost. When lifelong Conservative voters, whose churches make regular collections for the food bank, are dismayed, then you’ve lost. When your own MPs are sending text messages such as the one I got, worrying that free school meals could become this government’s poll tax – well, sooner or later a U-turn becomes inevitable.

They may want to call it something different, dress it up not to look like a retreat. But the cabinet can’t keep twisting themselves into the kind of knots Matt Hancock did on Monday morning, telling Radio 4’s Today programme that on the one hand he agrees with the footballer Marcus Rashford’s campaign to stop children going hungry, but on the other hand – no, they won’t actually do what Rashford wants. The prime minister’s promise a few hours later that no child would go hungry at Christmas, even if he couldn’t actually explain how that would be guaranteed, suggests he now realises the position isn’t sustainable. The only mystery is why it took so long.

One answer is the sheer pig-headedness of a No 10 operation that would rather risk Manchester revolting against lockdown rules in the middle of a pandemic than be seen to give an inch to its mayor, Andy Burnham, and which still thinks the only route to a Brexit deal is threatening to storm off without one. The only thing it knows is conflict, aggressively returning fire with fire; it prides itself on never being seen to back down, even if that does sometimes mean cutting off its own nose to spite its face. The Downing Street comms mantra is that if it just toughs things out for long enough, as it did over Dominic Cummings’ now notorious road trip to Barnard Castle, the media storm will pass.

But what it seemingly failed to notice is that this time the enemy isn’t the media or even the Labour party, which pushed the issue to a vote in parliament. This time Downing Street is up against a footballer rapidly approaching the status of national treasure, and lots of small needy children. Boris Johnson has reportedly now made contact with Rashford, but a smarter, less pugnacious operation would have ensured they’d talked weeks ago, just as it would have sent Johnson to Manchester in person to explain to the city why he wanted to put it into tier 3 against its leaders’ wishes, rather than firing potshots from London in a way that merely inflamed old tensions between north and south.

This isn’t just about No 10, however. Rishi Sunak has been mysteriously absent throughout the free school meals furore, fuelling speculation that for once this wasn’t a case of the Treasury refusing to cough up but of Downing Street making a political decision not to surrender. In truth, the Treasury may have been more preoccupied with yet another course correction, in the shape of the multibillion-pound package of extra support for employers it unveiled last week, after widespread complaints that its original job support scheme wasn’t actually enough to save jobs once furlough ends. To the Treasury, focusing on this arguably makes sense; saving jobs should in turn stop more children falling into poverty in future. But it’s confusing for voters, who can’t reconcile all those soothing words about the government putting its arms around the nation with stories of parents skipping meals so their children can eat. If there’s money to bail out business, why not for a few lunchboxes over half-term?

One explanation, perhaps, for the failure to engage properly with the argument is that this government is quietly worried about where it might lead. It’s a relatively short step from giving out free food vouchers in a crisis to making that the norm even after the pandemic, to asking some deeply awkward questions about why so many families need this help in the first place, even in many cases when they’re working. Might it have something to do with the fact that this country now has among the lowest benefits in Europe, alongside relatively high housing costs and years of stagnating wages?

But if that’s the reason they’re shamefully ducking this argument, the Tories have badly miscalculated. Johnson needs to do the right thing on free school meals, and do it quickly. But he should also realise that it won’t be the last such dilemma he faces, as the pandemic pushes more families into poverty. If, as the Tories keep saying, free food is just a “sticking plaster” solution, then sooner or later people will rightly expect to see a cure.

• Gaby Hinsliff is a Guardian columnist