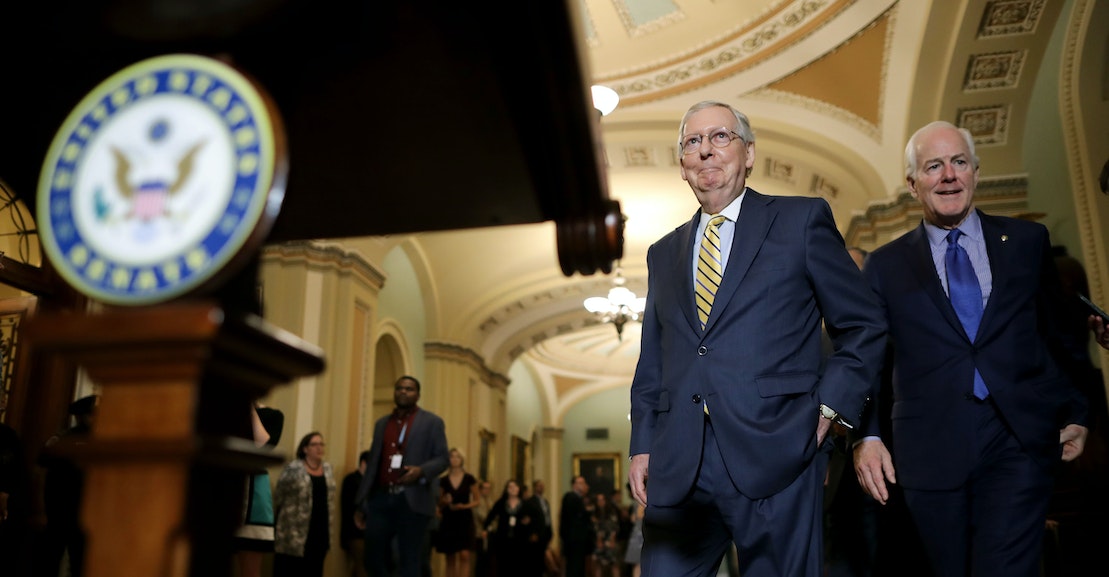 Like a phoenix, the deficit hawk will be back soon enough, as soon as it is politically convenient.

My party is very interested in deficits when there is a Democrat in the White House. The worst thing in the whole world is deficits when Barack Obama was the president. Then Donald Trump became president, and we’re a lot less interested as a party.

One reason Republicans are far more successful than Democrats in implementing their agenda is they have a long-term plan that actually anticipates Democratic victories from time to time; in fact, the occasional Democratic victory is essential to its success. The basic strategy here is called “starve the beast”: it involves big tax cuts when Republicans are in power and hardline deficit reduction when Democrats are in charge. (Occasional Democratic control is actually essential to give Republicans political cover for spending cuts that might otherwise prove politically painful for them.) It worked perfectly during the administrations of Bill Clinton, George W. Bush, Barack Obama, and Donald Trump, and Republicans are now preparing to keep it going through an almost-inevitable Joe Biden administration.

The theory, which first emerged in the late 1970s, is to continuously shrink the size of government by denying it necessary revenue. Ronald Reagan explained the basic principle of beast-starving succinctly in a February 5, 1981, address to the nation:

Over the past decades we’ve talked of curtailing government spending so that we can then lower the tax burden. Sometimes we’ve even taken a run at doing that. But there were always those who told us that taxes couldn’t be cut until spending was reduced. Well, you know, we can lecture our children about extravagance until we run out of voice and breath. Or we can cure their extravagance by simply reducing their allowance.

Tax cuts create budget deficits, which alarm Wall Street and put pressure on Congress to restrain and cut spending and raise taxes. Since Democrats are dependent for campaign contributions on the same class of ultrawealthy individuals who fund the GOP, Democrats are always quick to take up deficit reduction when they are in power. There’s nothing a Democrat hates more than being branded a tax-and-spend liberal. (The famous tax pledge that virtually every Republican officeholder has signed ensures that the bulk of deficit reduction will come on the spending side.)

Bob Woodward wrote a whole book, The Agenda, about how Bill Clinton pretty much abandoned all his campaign promises immediately upon taking office in favor of deficit reduction. Clinton forced a number of Democrats in Congress to cast agonizing votes in favor of spending cuts, tax increases, and budget controls that led many to defeat in 1994—a move that helped immeasurably in putting Republicans in control of Congress for the first time in 40 years. Republicans voted against Clinton’s deficit-reduction package, all the while proclaiming their fealty to a balanced budget and eternal opposition to budget deficits. Later, when the 1993 budget bill eliminated the deficit and created budget surpluses, Republicans falsely took credit.

The minute George W. Bush took office, his first order of business was a big tax cut. Fortunately for him, Clinton had bequeathed him projected budget surpluses that Bush could simply draw down to pay for the tax cut. It was possibly Clinton’s worst mistake in office to simply hoard the surpluses rather than using them to pay for Social Security or health reform, thus taking them off the table when Republicans regained power. A long-term Democratic strategy would have locked up the surpluses so that Republicans couldn’t piss them away on tax cuts.