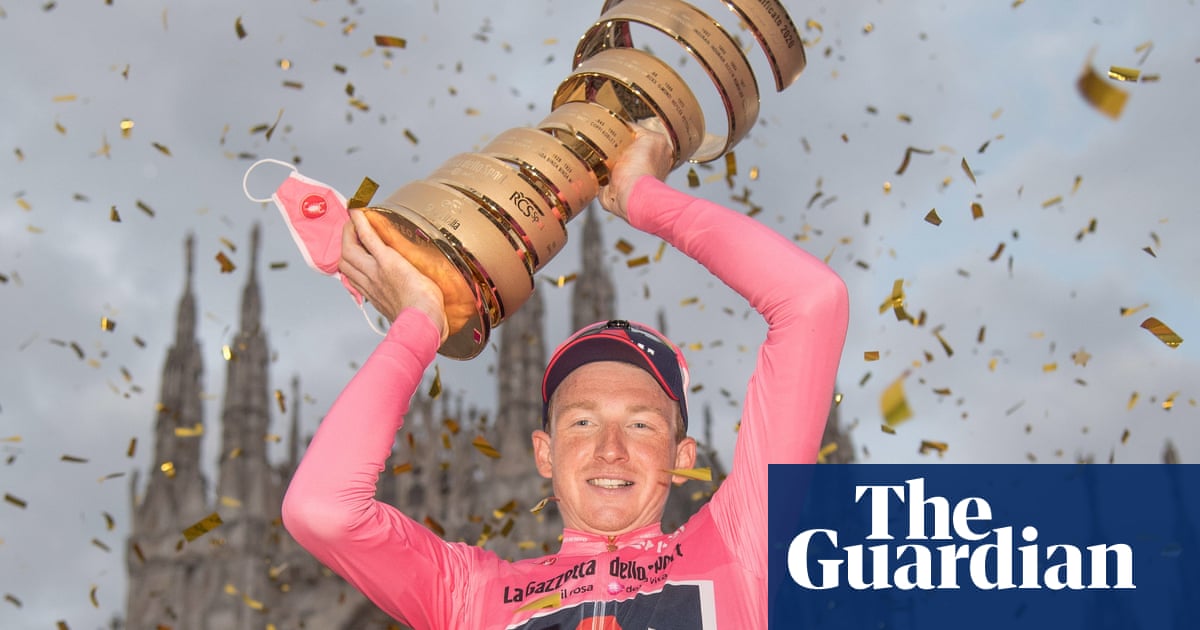 It is the stuff of teenage cycling fantasy, a scenario that a wannabe might conjure up while pedalling a paper round or serving at the counter in a bike shop: a young rider travels to one of the three greatest races in the world, is thrust into leadership of his team when the designated No 1 falls off his bike, and then endures an unprecedented cliff-hanging finale to take the biggest win of his life.

Welcome to the world of Britain’s latest cycling star, Tao Geoghegan Hart, 25 years old, born and bred in east London, who on Sunday was crowned the winner of the Giro d’Italia, the three-week round race which is second only to the Tour de France in prestige and difficulty.

In the last 10 years, cyclists from the UK have become particularly good at the Grand Tours – the Vuelta a España, currently taking place, is the third – and now another has joined Sir Bradley Wiggins, Chris Froome, Geraint Thomas and Simon Yates as a British winner of one of the big three. It is a far cry from watching Wiggins ride down the Mall in his Team Sky kit as a starstruck teenager, as Geoghegan Hart did when the British team was unveiled in 2010.

“It’s bizarre, never in my wildest dreams did I think this would be possible when we started a month ago in Sicily,” said Geoghegan Hart after his partner Hannah Barnes, herself a professional cyclist and former British national champion, had given him a celebratory hug at the finish in Milan’s Piazza del Duomo. “All my career I’ve dreamt of trying to be top five or top 10 in a race of this stature. This is something completely and utterly different and it’s going to take a long time to sink in.”

He was a stroppy, driven teenager, a footballer who turned to cycling because he felt that in team sports there was a risk of other people letting him down. He was also a swimmer, part of a relay team swimming the Channel at the age of 13. His coaches recall a driven young athlete, not shy of telling them what he thought, who seemed mature for his age – perhaps down to the fact that his parents split up when he was relatively young – and with a remarkable work ethic, which is hardly surprising in a young man who watched his builder father working 16-hour days.

As a teenager, he worked at Condor Cycles in London, earning “pin money” at weekends, and was selected for the Great Britain junior academy at 16. In 2015, he was offered a place at Team Sky – now sponsored by the chemical giant Ineos – which he turned down initially as he felt he had not won enough. He describes himself as “a mongrel” due to his mixed Scottish-Irish and East End heritage and hopes to ride the 2022 Commonwealth Games in Birmingham for Scotland.

Prior to that, Geoghegan Hart may have to put personal ambition aside, with Thomas aiming to return to his best, and Simon’s twin brother Adam Yates joining Ineos next year. For now, however, he simply wanted to savour the moment.

“I’m just going to enjoy this,” he said. “It’s incredible but I’m going to stay the same person, stay as professional and dedicated as I believe I always have been. I will wake up every day and look forward to racing my bike and being grateful for the honour and privilege it is to be in this position at these beautiful races.”

In Spain, meanwhile, moving in second place overall on Sunday was Hugh Carthy, another young Briton who has raced in the shadow of the greats in recent years. Maybe we had better watch that space as well.