Thousands of Britain’s top child-health specialists have joined forces to condemn the government for its refusal to fund free meals for disadvantaged children in England over the school holidays, amid a spreading grassroots campaign on the issue led by England and Manchester United footballer Marcus Rashford.

With a growing number of councils and businesses this weekend offering to provide free meals, more than 2,000 paediatricians across the UK have signed a letter expressing their shock at the decision. They state that ensuring children have enough to eat is one of the “most basic human responsibilities”.

The letter, co-ordinated by the Royal College of Paediatrics and Child Health and seen by the Observer, says: “Every day, we see the impact of hunger and malnutrition in our work as paediatricians. It is not unusual for us to care for children who don’t have enough to eat or who don’t have access to a substantial meal outside of what is provided in school. 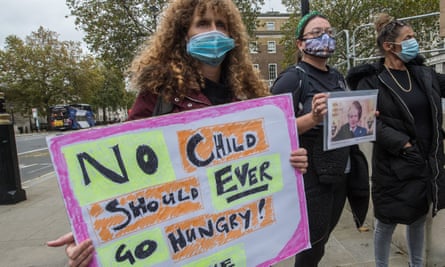 A protest outside Downing Street on 24 October against the government decision not to extend free school meals during half term and the Christmas holidays. Photograph: Guy Smallman/Getty Images

“We call on the UK government to match the pledges of the Welsh and Scottish governments and the Northern Ireland Executive, to continue to provide children from low-income backgrounds with free meals over the coming weeks and to then extend this at least until the Easter school holiday.”

The letter praises Rashford as a “source of inspiration” for his campaign, which continued to attract a groundswell of support last night. Hundreds more businesses have signed up to help provide meals this weekend and scores of councils, including prominent Tory-led authorities, have agreed to fund local programmes. An online petition set up by Rashford now has more than 700,000 signatures, while Labour is planning to embarrass the government by holding another Commons vote on the issue.

Russell Viner, president of the Royal College, told the Observer that he had “rarely seen such anger among our members”. He added: “We care for children who don’t have enough to eat. We see far too many of them. It is heartbreaking that it has become a normal part of our jobs and hunger is all too common for millions of families in the UK. There is an opportunity to put this right. It is pointless to talk about levelling up the country, an ambition which we support, while refusing to offer temporary relief to children and families.”

The intervention comes amid frustration among many Conservative MPs, who want the decision to be reversed before the Christmas holidays. One senior figure said ministers were making a “massive mistake” by refusing to back Rashford’s campaign. Rashford’s successful campaign to provide food vouchers during the summer holidays is estimated to have cost £126m.

However, other Tory MPs caused anger by criticising the free meals drive. Ben Bradley, the Mansfield MP, was accused of linking free meals with “crack dens” and “brothels” in social media comments. He said his remarks had been taken out of context. North Devon MP Selaine Saxby apologised after appearing to criticise businesses giving away free food. Philip Davies, the MP for Shipley, also faced a backlash for a withering response to a 16-year- old constituent who had questioned his opposition to extending free s chool meals. MMinisters are also facing criticism after it emerged that schools in some of the most deprived areas of the country were told they will not now receive the laptops to help pupils learn remotely.

Allocations of laptops for disadvantaged pupils have been slashed by around 80%. A Department for Education spokesperson said allocations of laptops were being “more effectively” targeted to the children, schools and areas of the country that have “greatest need”. The Scottish and Welsh governments have already extended free meals during school holidays until next Easter. In Northern Ireland, children will be given meals over this month’s half-term break. Official figures from earlier this year suggested 1.4 million disadvantaged children were eligible for free school meals in England, but that is thought to have increased during the pandemic.

The concern among child health experts heaps further pressure on ministers. Dr Max Davie, officer for health improvement at the Royal College of Paediatrics and Child Health, said: “We’re a rich country. We shouldn’t have to fight for food vouchers when we’re in the middle of a pandemic.”

Dr Liz Whittaker, consultant paediatrician at St Mary’s Hospital, London said: “Missing meals isn’t just about going hungry on an individual day, it has a lasting impact on a young person’s life. It is impossible to justify any argument that this saves the state money.”

Meanwhile, Covid cases continue to mount. A further 23,012 positive tests were announced yesterday, along with 174 more deaths. A further 1,139 were admitted to hospital. 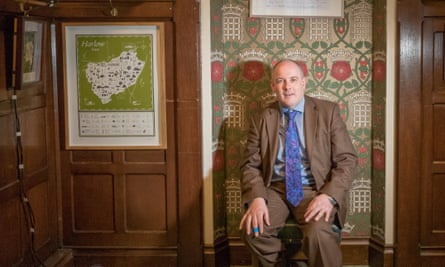 Robert Halfon, the Tory chair of the education select committee, called on the government to rethink and overhaul food provision for poor children. “The government has got to sort this,” he said. “They need to sit down with people like Marcus Rashford and his taskforce, which has got some of the biggest food companies involved. They need to set out a long-term plan to combat child food hunger, not only looking at rolling out free school meal vouchers at Christmas temporarily during the coronavirus pandemic, but also rolling out breakfast clubs, introducing a holiday activities programme, and examining [the level of support in] universal credit.”

Last night, former children’s minister Tim Loughton became the latest Tory to call on the government to change course. “I will now lobby ministers to reverse this decision for the Christmas break,” he said.

However, ministers insisted yesterday that there was a “better way” to deal with the issue of child hunger. Baroness Barran, the civil society minister, told the BBC Radio 4 Today programme: “The government has made over £200bn available to protect people’s incomes and people’s livelihoods. We have worked very closely with charities who operate food banks across the country. There are different approaches to how we do this but we have used all the levers possible to try to make sure that people are safe and well as we go forward.