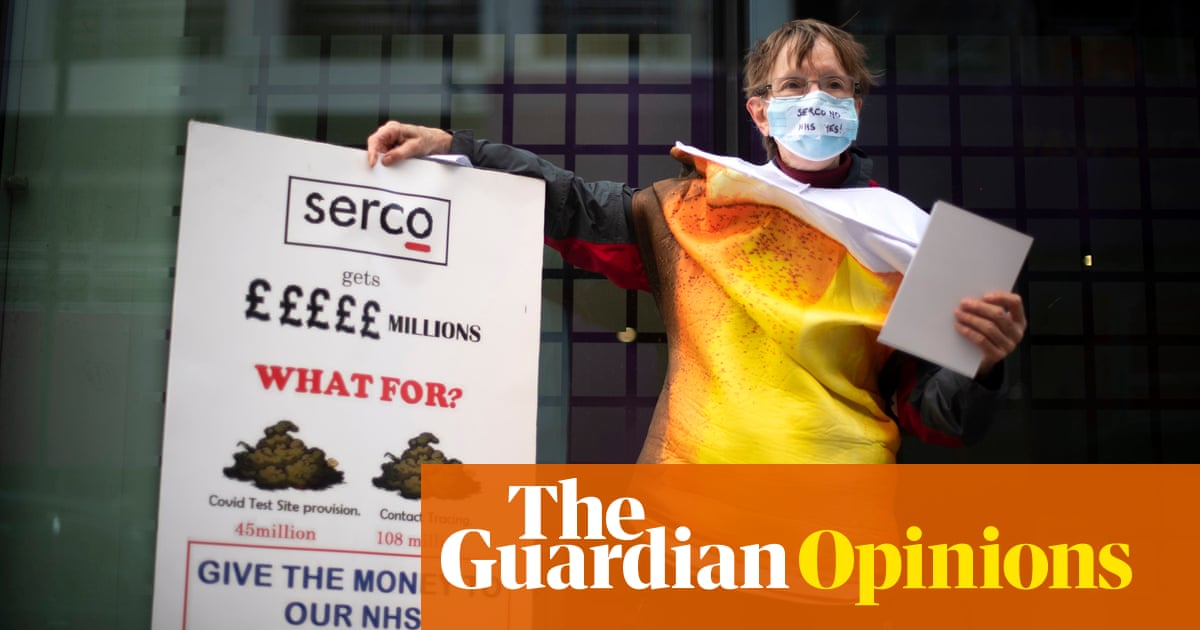 Last Friday, as towns and cities across the UK faced up to renewed lockdown restrictions, executives at Serco had reason to celebrate.

Serco is one of the dozens of private companies that have been contracted by the government to provide services as part of the national test-and-trace system. One of its contracts with the Department of Health and Social Care could be worth up to £410m. And at the end of last week, shares in the company soared by 18% after it announced profits vastly greater than forecast earlier this year.

Rarely has a government been so successful in its attempts to hollow out the NHS and the public sector as Boris Johnson’s has during this pandemic. The egregious costs of those private contracts are now well documented. Last week we learned that senior consultants from Boston Consulting Group are being paid as much as £6,250 a day to work on test and trace. That means in just one week they take home what nurses are paid in a year. Growing evidence shows this approach isn’t working: countries that have largely retained testing and tracing in-house have fared far better in the crisis. This goes for wealthy nations such as Germany, as well as poorer ones such as Cuba.

To understand why Britain – a country that boasts one of the oldest and historically most effective national public health systems in the world – has chosen to outsource its response to Covid-19, we need to look back to the interests and ideas that have shaped its welfare state. Today, outsourcing has been normalised, but it is in fact a new phenomenon.

The institutions that make up the British welfare state emerged following the second world war. The National Health Service in particular found support among liberal and Keynesian politicians, who realised that economic recovery after the war required a healthy workforce. As support for communism grew in the east during the 1950s, fears of revolution from below gripped politicians of all stripes. In short, the welfare state was an era-defining idea supported by an unusual coalition of interests.

In the decades after 1945, migrants to Britain, including the Windrush generation, became the builders, nurses, doctors, administrators, cleaners and technicians needed to create a nationwide welfare system. During this golden age of British welfarism, practical experience gained through long public service careers and the work of administrators, often women, were seen as critical for running services well.

But in the 1980s, all this began to change – both in the UK and elsewhere. The Conservative government that was elected in 1979 recognised neither the value of public sector expertise nor of public service provision. Under the leadership of Margaret Thatcher, the government launched a full-frontal assault on both. As the ideology of neoliberalism came to define economic policy through the ensuing decades, a related set of ideas took hold within the public sector, backed by corporate interests.

New public management was based on the false pretense that private competition in the public sector leads to improvement and cost-saving. Adopted by the Conservative and New Labour governments of the 1990s and 2000s, NPM reforms introduced quasi-market structures and private sector models of corporate governance into areas such as healthcare, schools and elderly care. Success was increasingly measured in terms of “doing more with less” in the short term, with little consideration for the longer-term loss of capabilities and knowledge that resulted from outsourcing large swathes of the welfare state to private companies.

In few areas was this transformation more radical than in IT. Throughout the second half of the 20th century, key developments in computing were driven by public sector institutions. Many governments had an in-house management and development agency that could be fielded out to other departments where support for IT was needed – operating similarly to today’s private sector consultancies, but for a fraction of the price, and with a much longer institutional memory. But by the turn of the millennium, most public sectors were outsourcing IT and digital infrastructure to multinational companies, and their capabilities in these areas diminished.

The election of the 2010 coalition government accelerated these long-term changes. Its austerity agenda was not just about cutting budgets to reduce Britain’s deficit, but also involved the restructuring of public services and the outsourcing of management to ostensibly reduce direct costs.

The 2012 Health and Social Care Act, for example, transformed how NHS services are commissioned and provided in England as part of a wider cost-cutting agenda. Existing processes were uprooted and management consultancies were brought in to deal with the disarray that ensued. The Royal College of General Practitioners and trade unions had warned that making local GPs responsible for commissioning services under this new system would not work; GPs don’t necessarily have the time, knowledge or capacity to make commissioning decisions. And indeed, they were right: we now know that clinical commissioning groups have spent millions of pounds on management consultancy firms including McKinsey, PricewaterhouseCoopers and Deloitte since the implementation of the act.

Today, the twin ideologies of NPM and austerity cast long shadows over the public sector. Structures within welfare programmes that once provided the checks and balances necessary to prevent the hollowing out of the welfare state have been slowly unpicked. After decades of outsourcing, Britain’s public sector was left enervated and underresourced in the face of a deadly pandemic.

Far from being a nanny state, NPM and austerity have also infantilised Britain’s public sector; it doesn’t have the confidence or capacity to take on challenges such as test and trace – even if the government wanted it to. Instead of a truly integrated national system capable of stopping the virus, Britain has a patchwork of private companies and struggling local authorities trying to plug gaps.

But these weaknesses do not justify delegating the pandemic response to a collection of profit-driven companies. There is no reason to think that Serco, or Sitel, or a group of graduates working for KPMG have the expertise to take on these challenges either. Contrary to what Serco’s chief executive has claimed, the decision to outsource public sector capabilities is a purely ideological move. There has never been a better time to rebuild our welfare state.