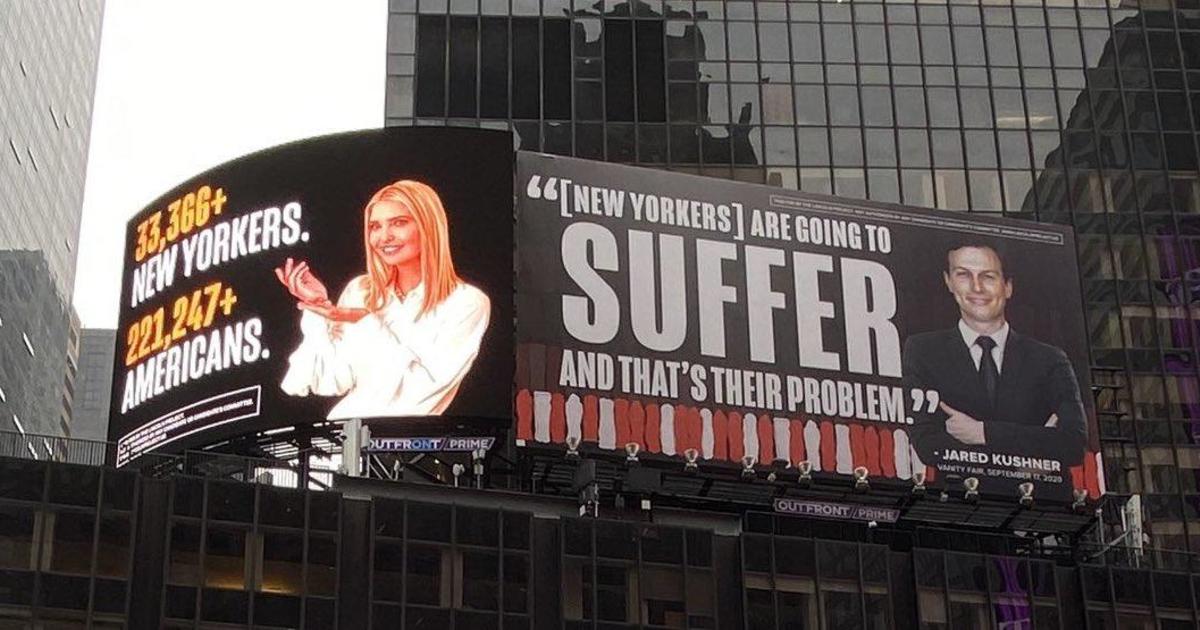 Ivanka Trump and Jared Kushner are demanding that an anti-Trump group removes billboards in Manhattan’s Times Square that feature their images alongside criticism of the White House’s handling of the coronavirus pandemic, according to The Lincoln Project.

The group of longtime Republican strategists, who prominently oppose the re-election of President Trump, said the billboards highlight Ivanka Trump and Kushner’s “indifference” to the suffering of Americans who have lost their lives due to “their reckless mismanagement” of the pandemic.

One billboard shows Trump, a senior advisor to the president, smiling and gesturing to statistics showing that over 33,000 New Yorkers and over 221,000 Americans have died from COVID-19. The photo appears to be taken from a tweet she sent in July to promote Goya beans.

A second billboard features Kushner, who is also a White House advisor, next to body bags and a quote that Vanity Fair reported he said during a meeting in March: “[New Yorkers] are going to suffer and that’s their problem.”

Kushner allegedly made the statement during a March 21 White House meeting with a private-sector group about the nation’s pandemic response. The Vanity Fair article claims Kushner criticized Governor Andrew Cuomo for failing to procure enough Personal Protective Equipment for his state.

In a letter tweeted by The Lincoln Project on Friday night, attorney Mark Kasowitz, who has worked for the president in the past, called the billboards “false, malicious and defamatory.” He claims Trump “never made any such gesture” and Kushner “never made any such statement.”

“If these billboards are not immediately removed, we will sue you for what will doubtless be enormous compensatory and punitive damages,” he wrote.

Kasowitz’s law firm did not immediately respond to CBS News’ request for comment.

In a subsequent statement, The Lincoln Project said the billboards would not be taken down, calling the outrage “comical.”

“While we truly enjoy living rent-free in their heads, their empty threats will not be taken any more seriously than we take Ivanka and Jared,” the statement said. “Jared and Ivanka have always been entitled, out-of-touch bullies who have never given the slightest indication they have any regard for the American people. We plan on showing them the same level of respect.”

“We consider it important that in Times Square, the crossroads of the world, people are continuously reminded of the cruelty, audacity and staggering lack of empathy the Trumps and Kushner have displayed towards the American people,” it added.

The Lincoln Project did not immediately respond to CBS News’ request for comment.

There were more than 83,000 confirmed coronavirus cases reported Friday, marking a new record high for a single day in the U.S. The latest surge is pushing the number of infections to more than 8.4 million and increasing the death toll past 223,000 people, according to Johns Hopkins University.

The staggering milestone, which is coupled with rising hospitalizations, comes just one day after President Trump falsely claimed the country was “rounding the corner” on the disease.